Plug it in: the electrification of everything 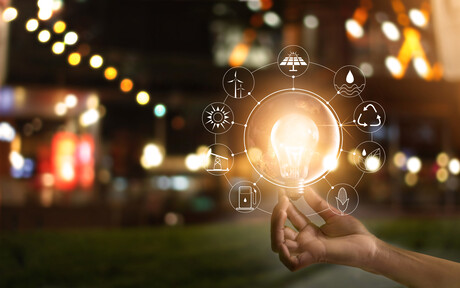 There is no doubt that there will be challenges in achieving net zero GHG emissions, but a significant proportion of the task is possible with technologies available today.

The COP26 Climate Conference in Glasgow has loomed large in the news of late. Leaving Australian climate politics aside, on a global scale there have been some initiatives, summarised in a final statement from the conference:

“We have seen a huge shift in coal, with many more countries committing to phase out unabated coal power and ending international coal financing.…While on the world’s roads, the transition to zero emissions vehicles is gathering pace, with some of the largest car manufacturers working together to make all new car sales zero emission by 2040 and by 2035 in leading markets. Countries and cities are following suit with ambitious petrol and diesel car phase-out dates.”1

According to Oxford University’s OurWorldinData.org (Figure 1), energy consumption accounted for 73.2% of GHG emissions in 2016, some significant elements being: 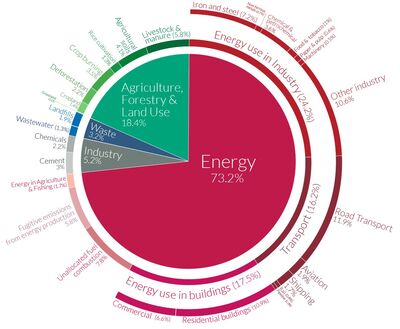 It is clear from these figures that the largest overall impact on GHG emissions will come from eliminating or reducing energy-related emissions in industry, transport and buildings.

At present there are really only two technologies that allow for energy consumption with zero carbon emissions: electricity from renewable sources and green hydrogen (which also depends on renewable electricity). As a result, there is a growing ‘electrification of everything’ movement.

Changes to the world’s energy mix

According to McKinsey and Company, renewables could produce more than half of the world’s electricity by 2035, at lower prices than fossil-fuel generation.2 The resulting lowering of electricity prices, along with the falling cost of electric equipment and more stringent greenhouse gas (GHG) emission regulation, is expected to boost consumption of electricity in sectors, such as passenger vehicles and space heating, where fossil fuels have long been the standard energy source.

As seen in Figure 1, industry consumes more energy than any other sector, but only about 20% of the energy consumed is electricity. Most of the electricity that is used is to drive machines that move things and materials, such as pumps, robotic arms and conveyor belts. The remaining energy consumption is usually in the form of fossil-fuel energy.

Carbon-based materials are also used as feedstock, such as oil products from which plastics are produced and coking coal that is used to combine carbon with iron to produce steel — in other words, coal and oil are also used as an ingredient, rather than an energy source. In this sense, both coal and (to a lesser extent) oil will always have a place as a carbon source for the foreseeable future, but will be phased out as a source of energy.

Replacing — by electrification — the fuel that industrial companies use for energy has several benefits. Generally, electrically driven equipment is only slightly more energy efficient than the conventional option, but it has lower maintenance costs, and, in the case of (for example) an industrial boiler, the investment cost of the electrical equipment is lower. If zero-carbon renewable electricity is consumed, the greenhouse-gas emissions of the industrial site lower significantly.

McKinsey has estimated that of all the fuel that industrial companies use for energy, almost 50% could be replaced with electricity using technologies available today, including all processes that need to generate heat up to 1000°C. About 30% of fuel consumption for energy is for processes that require very high temperatures, which include the production of steel, cement and ceramics. This will change, however. Only recently, Australian company Calix filed a patent for technology for the production of iron and steel with zero CO2 emissions.3 The company’s technology can produce iron from iron ore in a hydrogen atmosphere between 600°C and 800°C — around 1000°C less compared to a conventional blast furnace. While the technology uses hydrogen in the kiln, the entire process can be renewably powered.

Calix says that while the use of hydrogen in blast furnaces is being tested, there will be limits on the amount of coal it could replace due to a reduction in the conversion rate of iron ore to iron.

Mining is on an electrification binge

One industry that is a large consumer of energy is the mining industry, but over the last six months there have been numerous announcements by our major mining entities and industrial automation companies about mine electrification, particularly in the area of large haul trucks and underground mining vehicles.

BHP and Caterpillar have announced they are working to develop zero-emissions mining trucks, in order to support BHP’s long-term goal of achieving net zero operational GHG emissions by 2050. Similarly, Komatsu has announced same and is working with Rio Tinto on a pilot of electric mine vehicles.4,5

In the underground mining equipment market, Hunter Region-based PPK Mining Equipment is developing battery-electric underground personnel vehicles with the aid of Ampcontrol, and retrofitting diesel drivetrains with BEV technology in other vehicles.

Of course you can’t have large powerful haul trucks without large powerful batteries and the infrastructure to charge them efficiently. To that end, large automation and electrical companies are working on a solution. ABB for one has already announced high-powered fast charge technology to support large electric mining equipment, and compatible with all makes of haul trucks.6

“Electrify everything” is also a motto being promoted here and in the US by Australian inventor and US government advisor Saul Griffith. Along with The Australia Institute, Griffith has published a discussion paper called Castles and Cars, which outlines how much Australian households could save if they electrified everything, including the cars, their household heating, their water heating and their cooking.7

According to the discussion paper, the average Australian household currently uses around 102 kWh of energy per day, spends $5248 per year on energy-related costs and releases 11 tonnes of CO2-e into the atmosphere. Much of this energy use is due to the inefficiency of conventional fuels like natural gas and petrol for cars. The report claims that (along with solar panels on the roof and battery storage) changing to new electrical appliances and vehicles would drop the average daily household consumption to around 37 kWh — a nearly 64% net saving — while at the same time largely eliminating the household CO2 emissions. The main reasons for this are:

Figure 2: An electrified household is a cheaper and less wasteful future for us all. (Source: Rewiring Australia.)

Additionally, electricity produced using fossil fuel power plants is also highly inefficient, with most coal plants only 25–30% efficient and gas plants around 40–45%. Renewable sources do not have the same thermal losses and toxic waste by-products — and of course no CO2 emissions.

As with all major changes there are challenges with this course of action: problems caused by the change in the balance of energy generation in the power grid (through the addition of so many small generation sources) are proving to be a significant obstacle at the moment. But this is not a challenge that cannot be overcome with engineering know-how and the right investment.

In any case, making homes more energy-efficient will ultimately reduce the residential burden on the grid to the point where political debates over residential energy costs, fossil-fuel power generation versus renewables, and so-called ‘base-load’ power become redundant.

The problem with the Rewire Australia concept is that most households cannot afford to replace everything that is fossil fuel-based, as well as buy solar panels, battery storage and electric cars at today’s prices. Griffith therefore favours rebates and financing to make it more affordable. He says this needs to be a national priority, in the same way we built the Snowy Mountains hydroelectric scheme or spent money on the COVID-19 response.

“For context, that’s just roughly 9% of what we are predicted to have spent on the COVID-19 response in the last two financial years, or roughly 18% of our defence spending in those two years.”

There is no doubt that there will be challenges in achieving net zero GHG emissions, but a significant proportion of the task is possible — not with some as-yet undiscovered future technology, but with technologies available today, by electrifying as much as we possibly can.

How to unleash innovation in 2022 and beyond

Digital technologies will continue to power up innovation by unlocking new opportunities for...

ABB Australia's Head of Electrification talks about the need for action on climate change and...