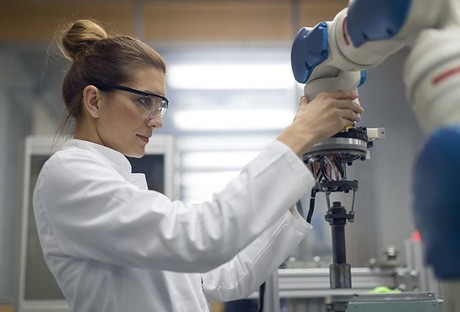 Industrial robots are commonplace in factories because they provide an effective alternative to manual workers for repetitive, high-volume assembly line tasks. The machines can continuously repeat high-precision tasks for many years with only the occasional interruption for routine maintenance. Boosted productivity ensures a return on the initial high capital investment.

But relatively low-cost human workers remain the best option for low-volume, high-mix, intricate assembly work because they are dexterous, flexible and able to solve problems that would grind a machine to a halt. Collaborative robots — the lightweight, compact, and relatively inexpensive cousins of full-size industrial robots — are now being introduced to combine the advantages of robots with the assets of humans. However, because collaborative robots share the workspace with humans, new engineering techniques are required to maximise productivity while keeping the workers safe.

Collaborative robots fill a niche in a manufacturing environment where the product mix is consolidating and volumes are increasing but not to the extent that justifies full automation. The robots can do the picking of parts, lifting and fetching, and repetitive, routine actions while the humans work on the intricate fabrication and intellectual challenges of the process.

Collaboration is not a natural extension for traditional industrial robots. The International Organization for Standardization (ISO) defines an industrial robot as “An automatically controlled, reprogrammable, multipurpose manipulator programmable in three or more axes, which can be either fixed in place or mobile for use in industrial automation applications.” The description fits a machine purpose-designed for maximum productivity without human assistance.

It’s not surprising that from the introduction of industrial robots in the 1970s, a division on the factory floor has remained a requirement for the safe automation of their high-volume applications. Today, workers are kept well away and the machines are enclosed behind metal barriers to eliminate the hazards posed by rapidly moving and heavy mechanical parts. Basic external sensor technology provokes an emergency stop of the industrial robots when someone or something crosses a beam or triggers a switch by opening the barrier. And when technicians do intentionally enter the robots’ operating envelopes for maintenance or reprogramming, the machines are powered-down with their arms locked in a safe position.

Speed, strength and precision remain important for collaborative robots, but to maximise the advantages of collaborative working, humans and robots need to work in harmony. And to justify the introduction of a collaborative robot, it must cost no more than the equivalent for human labour. A robot that’s moving parts into position and adding quick-drying adhesive is of little value if a human coworker still has the previous two to three workpieces to fit together. But more importantly than that, robots must be constantly aware of where the humans are positioned, how they are moving and the force they’re applying when contact is made (whether intentionally or unintentionally) to ensure safe working.

The key design objectives for collaborative robots can be summarised as achieving:

Key factors in collaborative robot design relate to the fact that the machine and human share the same workspace. The designer needs not only to ensure that efficiency is high but also that the robot is constantly aware of the sometimes-unpredictable movements of its coworker and can react in a safe manner. The designer also needs to ensure that the robot doesn’t apply excessive force if there’s intentional or unintentional contact between itself and the human. This adds complexity, because unlike industrial robots in which safety systems are not an intrinsic part of the robot, collaborative robots contain safety systems that are generally integrated into its own structure and controlled by its own systems.

Fortunately, guidance on these design challenges comes in the form of international safety standards for collaborative robots, which have been developed in parallel with the rapid introduction of these robots in the workplace. For example, the ISO provides some guidelines for designing collaborative robots in its ISO 10218 document, and a technical specification created by the organisation — the ISO/TS 15066 — highlights the importance of safety-related control system integrity with regards to controlling process parameters such as speed and force.

ISO/TS 15066 also provides general information for a collaborative robot designer to use, such as information explaining the need for a risk assessment of hazards in the workspace. For example, even the best robot design can’t be considered safe if it allows the robot to wave around a sharp object with its manipulator. In another example, the workspace could be dangerous if it’s closed in by fixed objects that cause a worker to become trapped then crushed by robot movement.

The key sections of ISO/TS 15066 address the design of workspaces, design of a robot’s operations and the transitions between a robot’s collaborative and non-collaborative operations. Specifically, the document provides extensive details for implementing the following collaborative-operation requirements, which creates safe, efficient solutions that fulfil the design objectives mentioned above:

A safety-rated monitored stop is an assured robot stop without removing power and occurs when a human worker enters the collaborative workspace. The system ensures that the robot and human don’t move at the same time and is primarily employed when the robot is rapidly moving heavy parts through the workspace.

Before a hand-guided operation can start, a robot must perform a safety-rated monitored stop. During the operation, a worker is in direct contact with the robot arm and can utilise hand controls to move it. This operation is used for lift assists or highly variable tool applications.

This collaborative work method is perhaps the most relevant, as it allows the operator and robot to move simultaneously within the workplace by equipping the robot with sensors to monitor the proximity of the worker. At large separations, the robot continues to operate at medium speed, but upon closer approaches, the robot reduces its speed, and at very close approaches, it comes to a complete safety-rated monitored stop.

Power and force limiting are required in applications where there could be intentional or unintentional contact between a collaborative robot (or any workpiece) and a worker when both are working in the collaborative workspace. Contact can either be quasi-static, such as the clamping part of a worker’s body between a robot’s manipulator and a fixed object, or transient, such as knocking into a part of a coworker’s body where the worker is able to recoil.

With some adaptations to limit cost, size and complexity, collaborative robot designers can employ existing industrial robot technology for some systems while still implementing the work methods described above. For example, the safety-rated monitored stop is an established technology for industrial robots that uses safety barriers to implement an emergency stop when a human enters the operational envelope.

Speed and separation monitoring demands new engineering techniques considering industrial robots are designed to come to a dead halt when a person breaches the work zone. In contrast, collaborative robots will keep moving, albeit at a reduced speed, when workers are sharing the workspace, unless an approach is close enough to trigger a safety-rated monitored stop. Key to implementing such systems is integrating sensors into the robot’s control systems so that the closed-loop feedback enables rapid motor response when speed reduction is necessary.

But the most difficult design challenge is power and force limiting. Designers can learn little from industrial robot design because its emphasis is on load capacity and speed. An annex for ISO/TS 15066 offers help by suggesting limits to quasi-static and transient forces for pain thresholds as well as minor, reversible and irreversible injury thresholds for humans. Transient force thresholds can be twice as high as quasi-static ones, because they occur within a shorter timeframe and the worker is able to recoil.

While research continues on pain and injury thresholds, the present guidelines recommend lowering clamping risks by reducing a robot’s speed to less than 250 mm/s and its force to less than 150 N during speed and separation monitoring operations, though transient forces can be twice as high but must not be applied for longer than 500 ms.

Other advice in the ISO guidelines includes:

Collaborative robots are making their mark in workspaces shared with humans — combining robot muscle with human dexterity and problem-solving skills is dramatically improving productivity. Factory managers are just recently beginning to appreciate the number of assembly applications — currently performed solely by human labour — that collaborative robots can be used for. That’s why the impact of collaborative robots is predicted to increase, with growth expectations roughly set to equal the size of today’s entire quantity of industrial robotics by 2025.

But it’s still early for the technology, and engineers are now learning that only some of the design techniques used in engineering industrial robots are truly applicable for their collaborative cousins. A new design methodology is required to ensure that collaborative robots remain safe around coworkers while still bringing speed, precision and load-handling benefits to the job.

*Steven Keeping has a BEng (Hons.) degree at Brighton University, U.K., and worked in the electronics divisions of Eurotherm and BOC for seven years. He has since held senior editorial and publishing roles in a number of electronics manufacturing, test and design publications. Steven is now a freelance journalist specialising in electronics, based in Sydney.