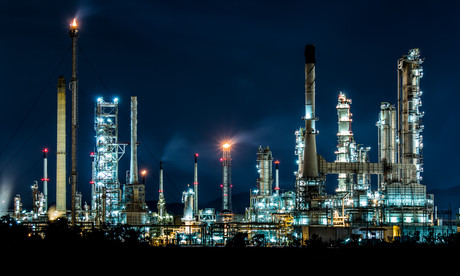 How to comply with environmental regulations and detect PRD malfunctions while minimising costs and cutting operating expenses.

As discussed in Part 1 of this article, pressure relief devices (PRDs) become one of the last lines of defence in keeping process pressure within the limits tolerated by vessels, pipes and valves. PRDs can be pressure relief valves (PRVs), pressure safety valves (PSVs) or rupture discs (RD). They activate when the pressure gets too close to the maximum allowable working pressure of the vessel or process component. As per regulations, all PRDs must be mechanically powered by the process itself, so they do not require external power or intervention to function. There are various faults that can occur with PRDs that can go undetected if they are not monitored properly. For example:

The effective monitoring of PRDs is therefore necessary to:

The requirements for refineries, chemical plants and other industries are similar worldwide, with the main difference being the tolerated amounts for each type of pollutant released. The more stringent rules can be generalised with three simple requirements:

Also, it is expected that the flare operates at all times when emissions may be vented to them, so quick identification of a PRD release is imperative.

Several industries are subject to tight regulations, going so far as to issue detailed requirements for specific units in a plant, such as:

Most importantly, bypasses and discharges through PRDs are considered a violation of the law in many countries, requiring plants to monitor discharges of individual PRDs.

Historically, PRDs have been difficult to monitor because they are simple mechanical devices by design. Monitoring methods typically include manual inspection of telltale signs. For example, on PRDs releasing to the atmosphere, wind socks are often used to monitor releases.

In order to monitor with this method, it is common to use process instrumentation to observe pressure peaks and valleys around the pressure limit, temperature downstream and flow in the discharge header. However, this method cannot be used in enclosed systems. Plants monitor PRDs by observing process pressure, but when the pressure is close to the operating limit, the peaks and valleys make it difficult to determine when the PRD is actually opened or closed. 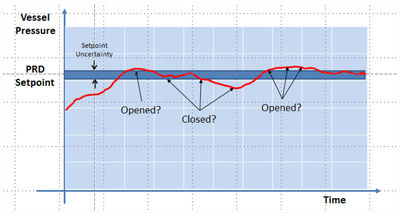 Unfortunately, these types of measurements are susceptible to false positives and inaccuracies and provide no insight into the health and status of the individual PRDs. Measuring flow in the discharge header does not show which PRD or PRDs were activated. Observing changes in the flare flame is also inaccurate and does not show which unit and which PRV caused the release.

A significant part of the difficulty when designing and installing a comprehensive monitoring system is that a typical plant will have several different PRD makes, models, sizes and operating pressures from various vendors. This can make it difficult to design a standardised monitoring system. The introduction of additional pressure, flow or temperature measurements in an existing plant also disrupts plant operation and the cost of laying new cables can be very high.

An effective way to monitor PRD activation and leakage

A very reliable, effective and economic way to monitor PRDs is to use wireless acoustic transmitters.

Process fluid flowing through valves and orifices generates acoustic waves in a wide and complex range of frequencies and magnitudes. A majority of the acoustic energy is in the ultrasound range, but some is also in the human audible range. Acoustic transmitters are able to detect ultrasound acoustic waves in the pipe wall as well as its temperature. These devices are wireless, small, lightweight and non-intrusive, so they do not require any change in plant installation. They can be easily clamped on the exhaust pipe, as shown in Figure 2. 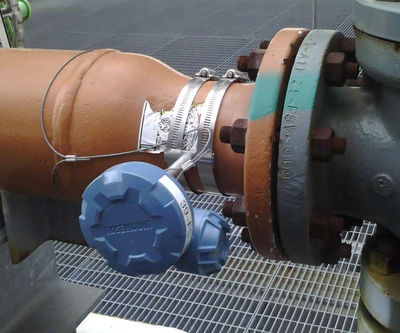 PRD operating condition can be determined by the following (Figure 3):

Figure 3 illustrates the flow discharge followed by a temperature change. 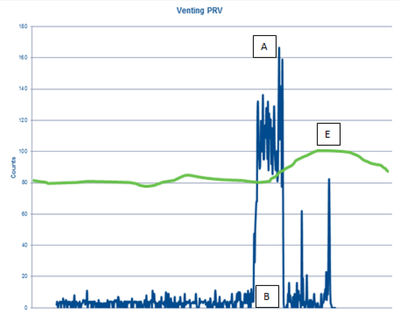 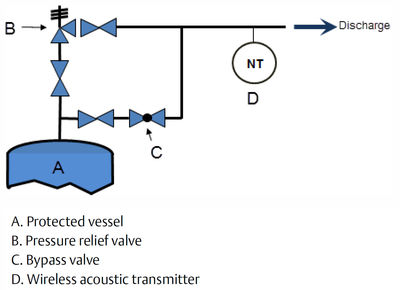 Figure 4: A wireless acoustic transmitter should be installed downstream, close to the valve.

Sometimes the wireless acoustic transmitter can measure noise originating in other parts of the process. If the background noise varies too much, it may be difficult to determine when there is a discharge. In this case, it may be necessary to install a second acoustic transmitter downstream or upstream of the first one to measure the background noise and subtract its signal value from the signal being measured by the PRD monitoring transmitter. The calculation is done in the host system. 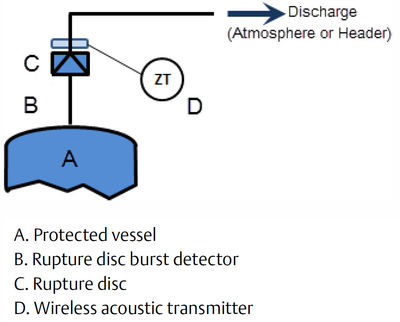 Rupture discs can be better monitored with the use of a wireless acoustic transmitter, as indicated in Figure 6. The transmitter can detect when the disc ruptured and the duration of the discharge, as it does for relief valves, but it may also detect even small leaks caused by pinholes. 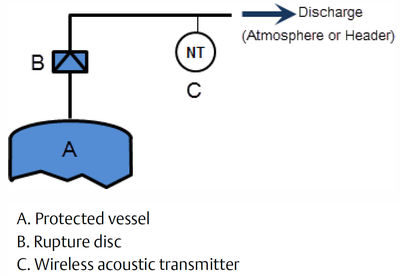 Monitoring a combination of relief valves and rupture discs

As discussed before, relief valves must be isolated from harsh process conditions by using rupture discs. In normal operation, the relief valve is not in contact with corrosive, gumming or hot process fluids. If the vessel pressure reaches unsafe values, the rupture disc bursts, followed by the RV opening.

A wireless pressure transmitter can provide accurate and reliable pressure measurement; however, monitoring the pressure between the RD and an RV is not sufficient to reliably determine when the RV has opened or closed, so still needs to be used in conjunction with a wireless acoustic transmitter downstream of the RV, as shown in Figure 7.

It should be noted that the rupture disc does not need to be replaced immediately after bursting, because the wireless acoustic transmitter is still monitoring pressure releases. This allows maintenance personnel to replace or maintain the equipment at the most convenient time, without having to slow or shut down the process. 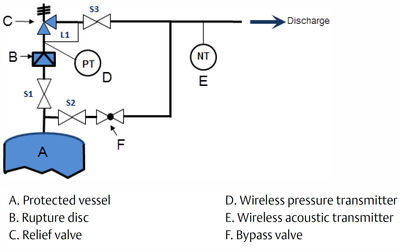 Figure 7: Monitoring a combination of relief valves with rupture discs. 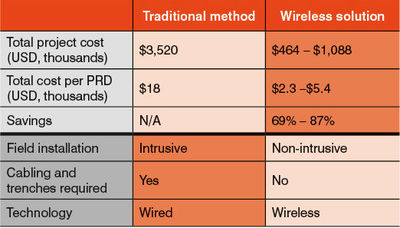 The increasing interest in Australia for commercial involvement in space opens up new avenues of...

Taking the next step in processing optimisation

As the world outlook has become increasingly uncertain, many mining operations have implemented...