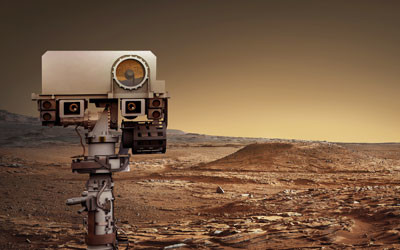 Since the announcement of the establishment of the Australian Space Agency (ASA) on 14 May 2018, the agency has been taking a commercial approach to space ventures. Its stated aims are to leverage Australia’s industrial skills in mining remote locations and developing automation, as well as its fast-growing start-up culture, to bring the space industry sector to $12 billion by 2030.

Of course, the agency’s focus needs to be commercially based: its government-funded budget is only $41 million for four years, which is a drop in the ocean compared with NASA’s budget at US$20 billion and the European Space Agency’s 5.7 billion euros. Australia’s space projects will therefore need to be commercial enough to interest businesses.

While ASA is only a new venture, Australia’s space experience goes back to the earliest days of space activity. Australia was one of the first countries to launch a satellite from its own territory — sending a satellite into orbit from the Woomera military site in South Australia as early as 1967 — and when Neil Armstrong made the first moonwalk in 1969, it was the Parkes Radio Telescope that picked up the TV signals for most of the transmission that was broadcast to the world.

So how is all this of interest to readers of ProcessOnline? The answer lies in the wealth of knowledge we possess in the fields of remote control and automation. If you are an automation engineer looking for new and interesting challenges, there may be some amazing new career opportunities on the horizon!

The challenges of near future space travel

Unless you have been not paying attention to the technology and science news of the last few years, you would have noticed that there is a lot of discussion about sending people to Mars and otherwise exploiting space, not only from space agencies, but more vocally by entrepreneurs like Elon Musk (Tesla, SpaceX) and Jeff Bezos (Amazon, Blue Origin).

The biggest achievement of these organisations, particularly SpaceX, has been the development of re-usable, remote-controlled space vehicles. But of all the problems that must be solved to achieve travel to Mars, one problem is fundamental: how do you fuel it? Just escaping Earth’s gravitational field requires an extensive burn of fuel, so how do you have enough left to send a vehicle on a return trip? Or even just to land on Mars safely (assuming no return journey is expected)?

Of course this problem of fuel was (sort of) solved for the Apollo program, but only enough to move three men to the Moon, land two of them, and bring them back with literally an unpowered fall and crash-landing in the ocean.

Numerous US, European and Asian agencies as well as corporations have been developing proposals for human missions to Mars. We already know the shortest time humans would have to endure such a trip: around 2 years and 11 months.

The lowest energy transfer to Mars is known as a Hohmann transfer orbit1, which would involve an approximately 9-month travel time from Earth to Mars, about 500 days at Mars to wait for the transfer window to Earth, and a travel time of about 9 months to return to Earth — so any astronauts sent to Mars would be up for a trip of almost 2 years and 11 months, and the life support systems on Mars would need to support them for at least 500 days.

There are also plans for a permanent colony, in which those who go would not return — some argue that such a mission could be achieved with less difficulty and expense than a mission that includes a return to Earth. The time frame for human missions to Mars is currently predicted by most organisations involved to be within the next 10 years.

Of course all this may seem far-fetched for many, but so did the idea of landing men on the Moon when John F Kennedy announced the plan in 1961. In any case, before a successful mission to Mars can be accomplished — despite the highly optimistic predictions of Elon Musk — the Moon will play an important role in testing human activity in a hostile planetary environment, and for providing the necessary resources for any mission to Mars.

In September 2019, it was announced that the ASA and NASA have launched a new partnership on future space cooperation. This includes the opportunity for Australia to join the United States’ Moon to Mars exploration approach, including NASA’s Artemis lunar program.

The Australian Government is investing $150 million over five years for Australian businesses and researchers to join NASA’s endeavour, and deliver key capabilities for the mission. Dr Megan Clark AC, Head of the ASA, said the partnership “will allow our businesses and researchers to contribute Australia’s best ideas and technology to support NASA’s plan to return to the Moon and on to Mars”. Dr Clark is also a non-executive director of Rio Tinto Limited, widely regarded as a world leader in automated mining technologies. Currently Rio Tinto is capable of tracking 4000 vehicles across 60 global operations, and its autonomous remote mining and transport capabilities are highly regarded.

So what would be mined on the Moon?

In 2018, scientists found ‘definitive evidence’2 that water ice exists on the Moon. In the context of a plan for people to potentially live and work on the Moon, such local water would be a valuable resource. However, more important is the potential to use the water to make rocket fuel through the generation of liquid hydrogen and oxygen. This would mean that spacecraft would only need enough fuel to leave Earth and make it to the Moon, where they could then re-fuel. This lowers the weight (and cost) of the spacecraft, and the journey.

There is also the bulk regolith (lunar soil), which can be used in the construction of structures needed on the Moon itself and to make shielding to protect habitats thermally and from radiation. Regolith would not be transported to Earth, but for missions that include building a lunar base, it could be very beneficial.

Metals can also be extracted from the oxides in the soil by chemical reduction — iron, titanium and aluminium — although it would not be practical to return them to Earth. They would be used for local lunar purposes.

And then, of course, there are the rare earth metals (REMs). Currently, China produces more than 90% of the REMs we need for electronics. But reserves are running out fast with some elements, including dysprosium, neodymium and lanthanum, expected to be depleted within the next 20 years. In order to feed the world’s appetite for technology, new sources of REMs must be found.

It is known that not only REMs can be found on the Moon, but also thorium and helium-3, an isotope unavailable on Earth, but which would be useful on Earth for future nuclear fusion power generation. The Earth doesn’t have any helium-3, because although it is blasted at the Earth from the Sun, the Earth’s magnetic field acts as a shield for the charged particles carrying it. The Moon on the other hand has no appreciable magnetic field, making the Moon’s surface layer of rock and dust a good candidate for obtaining helium-3.

It may happen sooner than you think

The Moon is now busier with exploration than ever before. China landed is first vehicle on the far side of the moon in January 20193, Israel has sent a privately funded probe called Beresheet4 and India is having a go as well. The European Space Agency has said it plans to start mining water on the moon by the middle of the next decade. 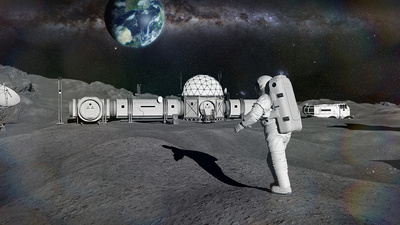 The ESA has said it plans to start mining water on the moon by the middle of the next decade. (Image: ©stock.adobe.com/au/dottedyeti)

Andrew Dempster, Director of the Australian Centre for Space Engineering Research at the University of New South Wales, is working with companies like Rio Tinto on proposals to mine water on the moon. Dempster’s goal is to send a mission there within five years, citing the proliferation of private companies like SpaceX that are making space more easily accessible.

“What’s preventing them (the mining companies) from participating at the moment is that the risks that are there are not risks they have dealt with before,” Dempster said5. So as well as tackling the engineering challenge, his team needs to make a compelling business case.

Australia’s stated commercial space strategy means that our country’s expertise6 in mining robotics and automation will make it a valuable partner for the US on the moon. Current US ambitions on the moon are not small: after the planned landing of Artemis 3 in 2024, the objective for NASA is to establish a permanent human presence on the lunar surface by 2028 over 12 Artemis missions.

Establishing and sustaining lunar base facilities will require robotic systems that can be remotely operated either from a space station in lunar orbit, known as the lunar ‘Gateway’, or potentially from Earth. Under some circumstances, those operations could be managed directly from Australia: humans and robots will be working side by side on the lunar surface, and Australian companies can contribute directly to those operations.

Our potential to play a central role in this area doesn’t just end on the moon. Imagine companies such as BHP and Rio Tinto mining an asteroid — Australia’s expertise in the utilisation of robots and autonomous systems in terrestrial mining can be equally applied in space. The Moon would be the launch base for robotic asteroid mining.

There are, of course, risks

The opportunities are enormous, but the risks are also high. Mining companies are well versed in the risks associated with exploration (prospecting), mining methods, processing and transportation, but with regard to doing those things in a vacuum, low gravity, and far from Earth are not.

There are also legal risks: there are two existing space treaties that were written long ago — the Outer Space Treaty of 1967 and the Moon Agreement of 1979 — both of which are open to interpretation (or misinterpretation) of ownership and resource rights. At the moment the Moon and Mars are still politically a bit of a ‘wild west pioneer’ scenario.

“Commercial exploitation of resources is never explicitly mentioned,” Andrew Dempster wrote7. “This creates a situation in which the interpretation of the treaties can lead to strong support to both sides of the argument. For instance, the Outer Space Treaty makes statements that in relation to resource exploitation could be seen as contradictory or open to interpretation both for and against.”

Gone are the days when space exploration was dominated by NASA and US Government funding. Tomorrow’s space exploration will exploit technological innovations coming from the commercial sector — including small commercial space start-ups, including those in Australia. NASA may be taking the lead with the Artemis project, but private companies like SpaceX and Blue Origin will be close on their heels. Australia’s space industry companies need to move quickly to benefit from Artemis, because the return to the Moon will be just the beginning of a long period of growth in human space activity. The opportunities for profit for smart Australian organisations is there, now — and our automation engineers will play a key role.

AI will have an important role in improving process performance; however, the first steps should...

I have my head in the clouds

The IIoT cloud unlocks possibilities for the OT world that were previously unavailable.