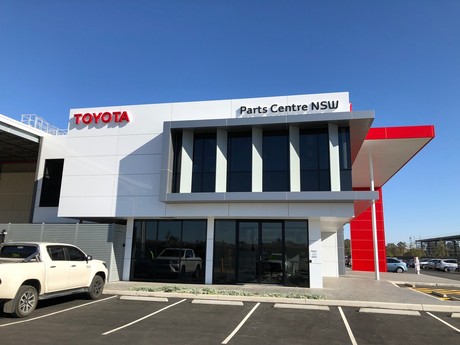 Toyota is set to unveil the most advanced automotive distribution centre in Australia as it transitions from carmaker to vehicle and parts distributor. The world’s leading car manufacturer has built a multimillion dollar facility at Kemps Creek — an emerging new industrial hub in Western Sydney.

The 44,000 m2 two-level Toyota Parts Centre, which is scheduled to open later this year, will carry more than 100,000 automotive parts for local and export markets. For the new site, the company has partnered with Omron to develop an innovative warehouse solution using the latest automation technology.

For the first time, Toyota will use a fleet of five Omron LD 90 mobile robots (autonomous intelligent vehicles, or AIVs) to move parts around the new facility. The system can support up to 100 mobile robots using a single enterprise manager fleet controller.

According to Omron, mobile robots provide more flexibility than AGVs. They are nimble and offer greater speed and dexterity to improve throughput — and they can safely operate alongside people and avoid obstacles. AGVs can be costly and time-consuming to install and only follow pre-programmed paths, making them inflexible, in that they can’t drive around obstacles and obstructions.

AIVs have the intelligence to choose the best path for each individual job, and Omron’s LD Series mobile robots can operate up to 15 hours on a single charge.

At the new Toyota facility, the robots will carry payloads of up to 50 kg and will travel at speeds of 3.8 km/h or 1 m/s. They can be programmed to play music or broadcast spoken safety warnings such as “moving forward”, “reversing” and “stand clear”.

The robots are fitted with fully integrated roll-tops so that plastic crates with parts can be seamlessly picked up and transferred onto fixed conveyors. 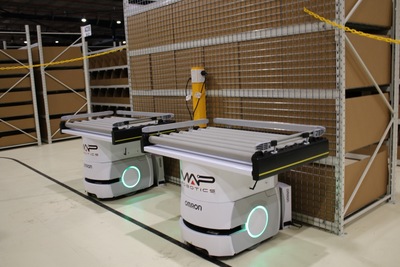 The automation package for the Toyota facility has been nearly two years in the making. Using the latest technology available it will be the most efficient automated facility in Australia for parts warehouse picking.

The new technology has been trialled for the past 12 months in a proof of concept to ensure the functionality is met. After two more trials the new technology will be officially launched — subject to passing the necessary criteria.

The system features EtherCAT industrial fieldbus technology — an essential part of Toyota’s new IoT deployment strategy. In May 2016, Toyota Motor Corporation selected EtherCAT as its Industrial Ethernet technology of choice and its new factories around the world are based on EtherCAT.

Toyota has long been recognised as an industry leader in manufacturing and production. The company has had a presence in Australia since 1963, with Australia one of the first countries to assemble Toyota vehicles outside Japan, and it was the last of Australia’s major automakers to cease manufacturing in Australia, following similar moves by Mitsubishi, Ford and General Motors Holden.

Operations at Toyota’s national parts Eastern Regional Office at Caringbah in southern Sydney will be transferred to the new facility in coming months. When completed, the showcase Kemps Creek facility is expected to provide employment for up to 140 people over two shifts.

To date, the KHS Group has offered Ferrum can seamers only as accessory components for its...

One of the questions that arise from the current situation is what lessons can companies learn...

The iTRAK 5730 small-frame intelligent track system is said to improve throughput in...