Chemical engineer wins award for metal made of holes 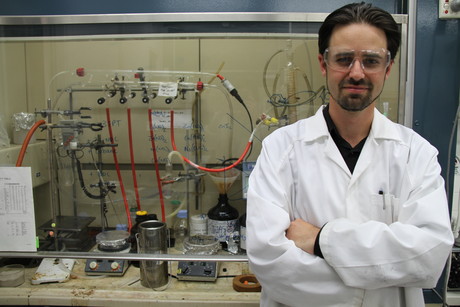 Associate Professor Matthew Hill, a researcher with Monash University and CSIRO, has won the inaugural David and Valerie Solomon Award for his work on metal–organic frameworks (MOFs), known as magic crystals, and showing that they can be used to clean air and water and in other industrial processes.

The award is for an early- to mid-career science or technology graduate working in academia/research or industry R&D who demonstrates substantial ability to foster research-industry collaboration and knowledge transfer for the benefit of Australia.

The award honours Professor David Henry Solomon AC FTSE, who is a Foundation Fellow of the Australian Academy of Technology and Engineering and who has been supported in his career by his wife, Valerie.

Associate Professor Hill will receive $15,000 and 12 months mentoring from a senior entrepreneur/industry Fellow of the Academy, with $5000 travel expenses to enhance this mentoring experience.

“The David and Valerie Solomon Award recognises the importance of building links between researchers and industry and Associate Professor Hill’s work make him a fitting inaugural winner.

“I’d like to pay tribute to Professor Solomon and his wife, Valerie, who have contributed so much to the Academy since its formation in 1976.

“This award will ensure that their contribution will continue long into the future.”

Associate Professor Hill is with Chemical Engineering at Monash and is Principal Research Scientist at CSIRO Manufacturing. He has a PhD from UNSW (2006).

MOFs are the world’s most porous materials — they are almost entirely made of holes. One teaspoon of a MOF may have as much surface area as an entire football field hidden inside it.

Like a sponge, MOFs can store and release molecules such as hydrogen on demand, such as fertilisers or fuels; or like a sieve, the pore sizes can be used to separate one thing from another, such as natural gas from impurities or carbon dioxide from an exhaust stream.

MOFs were originally made only in test tubes but Associate Professor Hill has invented a new chemical processing technology to produce MOFs at a rate of 10 kg/h, enabling commercial use.

Now his team at CSIRO and Monash University has partnered with American company EnergyX to commercialise a new production process that uses MOFs to create lithium.

Associate Professor Hill and his team are also working with industry to use MOFs to clean natural gas, clean air in submarines and purify pharmaceuticals.

A transformative experience encourages career in engineering for Indigenous students.

Carbon capture technology has been successfully implemented in a pilot cement plant in Belgium.