Scientists have produced the largest flexible, plastic solar cells in Australia - 10 times the size of what they were previously able to - thanks to a new solar cell printer that has been installed at CSIRO.

The printer has allowed researchers from the Victorian Organic Solar Cell Consortium (VICOSC) - a collaboration between CSIRO, The University of Melbourne, Monash University and industry partners - to print organic photovoltaic cells the size of an A3 sheet of paper.

According to CSIRO materials scientist Dr Scott Watkins, printing cells on such a large scale opens up a huge range of possibilities for pilot applications.

“There are so many things we can do with cells this size,” he says. “We can set them into advertising signage, powering lights and other interactive elements. We can even embed them into laptop cases to provide backup power for the machine inside.” 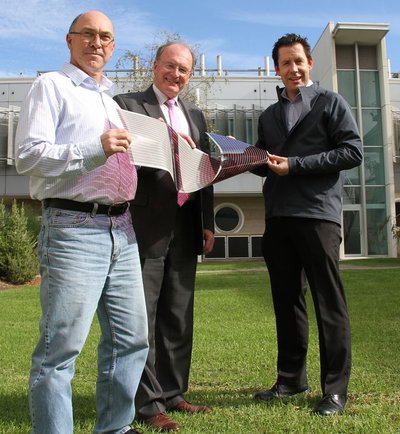 The new printer, worth AU$200,000, is a big step up for the VICOSC team. In just three years they have gone from making cells the size of a fingernail to cells 10 cm square. Now with the new printer they have jumped to cells that are 30 cm wide.

VICOSC project coordinator and University of Melbourne researcher Dr David Jones says that one of the great advantages of the group’s approach is that they’re using existing printing techniques, making it a very accessible technology.

“We’re using the same techniques that you would use if you were screen printing an image on to a T-shirt,” he says.

Using semiconducting inks, the researchers print the cells straight onto paper-thin flexible plastic or steel. With the ability to print at speeds of up to 10 metres per minute, which means they can produce one cell every two seconds.

As the researchers continue to scale up their equipment, the possibilities will become even greater.

“Eventually we see these being laminated to windows that line skyscrapers,” Dr Jones says. “By printing directly to materials like steel, we’ll also be able to embed cells onto roofing materials.”

The organic photovoltaic cells, which produce 10-50 W of power per square metre, could even be used to improve the efficiency of more traditional silicon solar panels.

“The different types of cells capture light from different parts of the solar spectrum. So rather than being competing technologies, they are actually very complementary,” Dr Watkins says.

The scientists predict that the future energy mix for the world, including Australia, will rely on many non-traditional energy sources. “We need to be at the forefront of developing new technologies that match our solar endowment, stimulate our science and support local, high-tech manufacturing.

“While the consortium is focused on developing applications with current industrial partners, there are opportunities to work with other companies through training programs or pilot-scale production trials,” he says.

Current module power output from printed devices is 10-50 W per square metre. On smaller, lab-scale devices, power outputs equivalent to over 80 W per square metre have been achieved. Lifetime testing of modules is ongoing, with current studies showing stable outdoor performance beyond six months. The consortium anticipates lifetimes of several years will be achievable in the near future.

The consortium is currently only purchasing materials on a research scale. When bought on a larger scale it is anticipated that component costs will be significantly lower and that pricing around $1/W will be achievable.

As part of the consortium, a complementary screen printing line is also being installed at nearby Monash University. Combined, they will make the Clayton Manufacturing and Materials Precinct one of the largest organic solar cell printing facilities in the world.

The Victorian Organic Solar Cell Consortium is a research collaboration between CSIRO, The University of Melbourne, Monash University, BlueScope Steel, Robert Bosch SEA, Innovia Films and Innovia Security. It is supported by the Victorian State Government and the Australian Government through the Australian Renewable Energy Agency.

OK, but what does digital transformation mean to me?

The term 'digital transformation' means different things to different people, and is...

The pandemic and its associated impacts have been more an accelerator for recent trends in...