Formula SAE is a design competition that is organised for university students by the Society of Automotive Engineers. The competition sees teams of engineering students from universities all over the world design, build, test and drive a Formula-style race car. It is a true test of a broad spectrum of engineering creativity and expertise.

Formula SAE started in the USA in 1981, with Australia joining the competition in 2000. Today, over 400 universities compete from all over the world, with up to 30 teams from Australia. Competitions are held in the USA, the UK, Australia, Japan, Brazil, Italy, Germany, Austria, Hungary and Spain.

UTS Motorsport participates in this contest annually, supported by a number of sponsors including SMC Pneumatics and SMC Manufacturing as technology partners and sponsors of the team. The engineering faculty at UTS is relatively small compared with many of the other universities involved in the competition. This makes it tough for them to compete; yet in 2010 they achieved the fantastic result of 9th place in the Australian event. 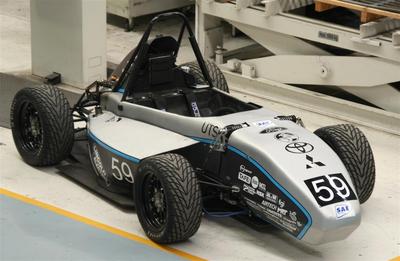 The Formula SAE car designed and built by UTS students.

Alex Lewis, the 2012 Team Manager, believes a smaller team enriches the team members’ experience, as they have a broader range of responsibilities. As well as being the team’s manager this year, Alex is personally responsible for the car’s suspension and chassis. In order to make time for both his study and role in UTS Motorsport, he takes fewer subjects per semester. This means that it will take him a year longer to complete his degree.

“The time I invest in Formula SAE returns more than just practical engineering experience. I have also had to learn about budgeting, costing, recruitment, promotion, sponsorship and project management. This means I will not only enter the workforce with my degree, but also a much broader range of skills,” says Alex.

The car is powered by a motorcycle engine, with competitors selecting single-, twin- or four-cylinder engines. The UTS team use a four-cylinder engine, which provides a smoother power output and significantly less vibration for the chassis than it counterparts. However, it is heavier and produces more power than can be utilised at the wheels. Alex gives this as an example of how improving performance in one area often results in extra effort being invested in another. In this case, increased weight is a compromise to improve driveability and longevity of the chassis. 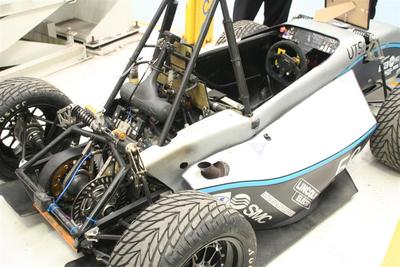 A partnership focused on innovation

In addition to the main prize, sponsors evaluate and reward teams for innovative design. Recyclability, crash worthiness, design approach and the inventive use of electronics are examples of the award categories. With the aid of SMC’s staff, the UTS Motorsport team produced two notable innovations. First, they designed an assembly jig for the chassis construction which ensured the precision of the build and sped up manufacturing. SMC Manufacturing built the jig for the UTS team based on a 3D design model produced by the students.

Next was an inventive pneumatic gear change system which led to increased performance and a reduction in the car’s overall weight. Pneumatic equipment and design are SMC Pneumatics’ area of expertise and it was able to provide valuable technology orientation for the students, as well as supplying the pneumatic valves and actuators for the team’s design. 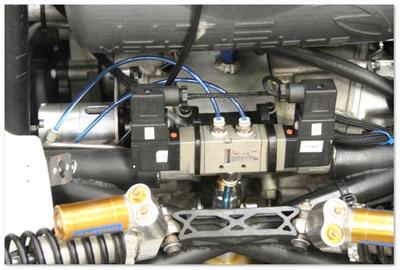 Alex tells of the insights to manufacturing alternatives that SMC’s experts gave them. For example, they chose to use the company’s precision laser-cutting equipment to manufacture parts of the car’s suspension. Compared to the alternative of CNC machining, this saved both time and money, winning the team valuable points in the ‘Cost and Manufacturing Analysis’ event of the competition.

Sam Howe, SMC Manufacturing’s Business Development Manager, has been significantly involved in the UTS Motorsport project over the last few years. Sam expresses how much SMC values the opportunity to play a role in the education of these aspiring engineering students who will contribute to Australia’s manufacturing future.

“Over and above the enjoyment and pride of being involved in the project, the biggest reward for us is to see the enthusiasm and determination of the UTS Motorsport team,” he said.

The next big driver for instrumentation and control: the ESG Criteria

Why instrumentation and control engineering professionals should be concerned with environmental,...

The IICA Gladstone Technology Expo will be held on 28 July at the Gladstone Entertainment...