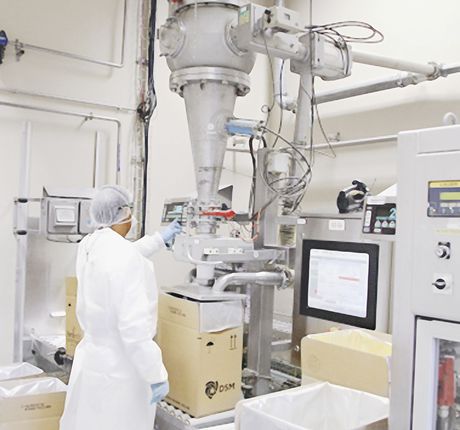 It is often said that knowledge is power. For a manufacturer, knowledge is definitely the key to unlocking greater efficiency through asset utilisation, traceability and transparency. Unfortunately that is easier said than done, and a lot of relevant and up-to-date data remains stranded in so-called islands of automation while management must make decisions based on outdated reports or estimates. Manufacturing execution systems (MES) operate at the level between ERP (enterprise resource planning) and control systems, and provide a real-time overview of equipment and inventory utilisation.

DSM Nutritional Products is a major supplier of vitamins and carotenoids (natural colourants) for the cosmetics, pharmaceutical and food and beverage industries. The company operates a major plant in Village-Neuf in Alsace, France, where vitamins and carotenoids and produced and mixed. The site, which also includes laboratories and research installations, employs around 500 people. About 70 of these work in the domain of premixing vitamins. Premixes are manufactured in direct response to customer orders. There is thus no actual storage of premix on-site.

Shipments must leave the works within a maximum of four weeks following order reception, including the time to deliver the necessary analysis certificates. At the Village-Neuf site, more than 1000 recipes can be assembled from around 200 raw ingredients. Seven different mixers are available, with capacities from 240 up to 8000 L. The plant’s operation requires reliable planning. The traceability of each production step must be assured and logistics must be accurate.

Until 2013, the premix plant used a tailor-made process control system, which required a strictly sequential execution of process steps. To improve efficiency and be prepared for future demands, various MES offerings were evaluated. An MES represents the process control layer located between the business level of the plant with its ERP system and the local process control level.

DSM Nutritional Products chose ABB from among four competing suppliers and ordered the company’s cpmPlus Enterprise Connectivity System (ECS). This system provides standardised interfaces to the customer’s ERP system, according to the ISA95 standard as supported by SAP for the vertical integration of process automation.

What has changed in terms of the MES? Some steps of the production process can now be performed in parallel. For example, in the past all raw materials required for a production lot needed to be available on-site at the same time for production to begin. Now weighing and portioning can begin as soon as the first components are unpacked. This massively increases the flexibility of scheduling at the weighing stations and thus alleviates a bottleneck.

“With the new MES, we now have real-time information about the entire process, which is furthermore more reliable and transparent,” explained Nodot. “We know at any time how much of what material is at which process step. This permits a detailed planning process with much-reduced demands for storage of raw materials.”

While implementing the system, ABB staff worked closely with the premix employees in order to realise the best implementation.

ABB’s delivery includes seven stations for the Extended Automation System 800xA control system in combination with cpmPlus ECS, as well as 15 other stations purely for cpmPlus ECS. The MES solution is based on virtualised servers.

“It is difficult to quantify the efficiency gain from the MES, since we have at the same time optimised the processes themselves,” Nodot concluded. “But we believe as a percentage, it is in the double digits. Above all, we are extremely pleased with the functioning of the new solution.”

MathWorks MATLAB and Simulink Release 2020a

MathWorks has introduced Release 2020a with expanded AI capabilities for deep learning.