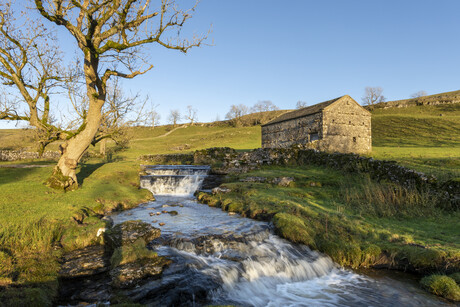 Natural water systems carry a high value. They support a diverse ecosystem for flora and fauna; they keep people healthy by preventing waterborne diseases; and they protect and create tourism and recreation opportunities.

However, in cities all over the world — and particularly in older cities — stormwater runoff and household sewage are transported to water treatment plants in the same piping network. An advantage of these so-called combined sewage systems (CSS) is that runoff water, which could be polluted with oil, pesticides, fertiliser and more, is purified before it is released into nature. That’s good news for the environment.

There is a downside, however: during heavy rainfall or snowmelt, a CSS piping network can be stretched to the limits and untreated water may escape into waterways via the combined sewer outlet (CSO). But the chances of this happening are greatly diminished when blockages in the CSO are removed in time.

British water company Yorkshire Water operates 55,000 km of sewers. In times of intense rainfall, CSOs are designed to release excess water and sewage into rivers to prevent flooding in public areas. Of course, these incidents need to be kept to an absolute minimum. In the framework of Yorkshire Water’s Pollution Incident Reduction Plan 2020–2025, the goal is to cut pollution incidents by 50%. Key to attaining this objective is to remove CSO blockages and thereby minimise the probability of a release.

For some time now, around 2000 sensors on CSOs have been monitoring sewage levels and issuing alerts when an overspill has happened. But wouldn’t it be better to know where blockages are most likely to occur so that debris can be removed before an overspill has a chance of developing? Until now, experts at Yorkshire Water have been trying to make predictions by evaluating data from the sensors with statistical methods, but that often led to false alarms and late detections.

The analytical challenge is how to account for the unique character of every CSO. Each one responds differently to rainfall, so it is difficult to know if the observed changes in level are normal or not. A number of factors come to play here — such as the design of the upstream and downstream network, or whether the area is hilly or flat, urban or rural.

The company therefore took the step of replacing statistical methods and partnered with Siemens and the University of Sheffield to develop a system that employs AI and the IoT to locate blockages before overspills can occur. The approach has now been tested at 70 sites across the region.

“The results of the innovative trial across the region have been very positive,” said Heather Sheffield, Manager of Operational Planning and Technology at Yorkshire Water. “The data has allowed us to identify problems with our network quickly, giving our teams the opportunity to attend to them before pollution occurs.”

The data from the sensors on the CSOs, along with real-time information on rainfall, is delivered to SIWA Blockage Predictor. This application — which runs on MindSphere, Siemens’ cloud-based IoT operating system — identifies anomalies in sewer system behaviour.

Initially, an AI system was trained with sensor data to learn the normal behaviour for a CSO when it rains. Now, a new AI model has been trained for each site to learn its unique pattern of behaviour in response to rainfall. Fuzzy logic technology is then employed to automatically interpret the data to detect any significant differences in behaviour. When an issue is found, a response team at Yorkshire Water receives a notification to visit the asset and remove the blockage or forming blockage. Because SIWA Blockage Predictor is embedded within a web application, users can access it on mobile devices and PCs.

“Artificial intelligence is not magic,” said Adam Cartwright, Head of IoT Application Delivery at Siemens. “It requires experts in data science to come together with people who really understand the issue and engineers who can build software, connect hardware and knit together a solution that is secure against cyber attack. This project is a textbook example of how all strands should come together.”

In the trial involving a variety of assets across 70 sites, SIWA Blockage Predictor gave up to two weeks’ advance notice of blockages — blockages that could have potentially led to undiluted effluent being released into the environment. Further, the predictor found nine in 10 potential issues, which makes it three times more successful than the prediction processes that relied on statistical methods. Another boon to operations teams is an extremely low false alarm rate of just 3%. That’s half the rate of the current statistics-method-based approach.

The journey from idea to solution began with a series of research projects between Yorkshire Water and the University of Sheffield. Over a number of years, the core analytics concept was proven on a sample of Yorkshire Water assets.

“By building a personalised fingerprint for the wastewater assets that reflects how the local network responds to rainfall and overlaying that on patterns of daily behaviour, we have been able to establish what each asset’s ‘normal’ response is,” said Joby Boxall, Professor of Water Infrastructure Engineering at the University of Sheffield.

While the analytics worked, as an academic project it was not designed to be scalable nor secure, and it wasn’t optimised for easy daily use. When Siemens joined the project team, the data science knowledge was transferred and the university team took on a second important role — validating the effectiveness of how Siemens had developed the analytics and how this compared to the existing Yorkshire Water solution. After analysing 21,300 days of data, this independent analysis by the university further boosted Yorkshire Water’s confidence in this new tool.

Siemens and Yorkshire Water are now working out the details for SIWA Blockage Predictor to cover the rest of the utility’s CSOs. Beyond that, the solution is being piloted at two other UK water companies.