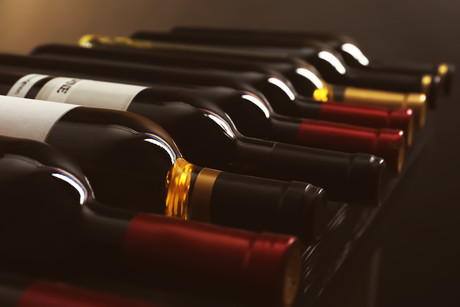 Is the latest darling of IT ready for the world of supply chains?

Now another subject is getting more and more attention: blockchain technology — another technology that is promised by many to be the panacea for many ills. Is it really? As it turns out, there is some debate about that.

One major area of interest in the application of blockchain technology is the management of today’s global supply chains — an integral part of any large manufacturing or process industry business. The complexity of modern supply chains, and a need for much greater transparency, is what is creating interest in the adaptation of blockchain technology to supply chains. It is believed to offer an opportunity to tackle some of the perennial issues that compromise supply chain effectiveness, such as the lack of traceability.

First let’s look at why it is of interest by way of some examples:

One example being discussed is using blockchain to track products and improve crisis handling. For example, in the case of a food-borne illness, once the product responsible is identified, blockchain can be used to check the audit trail, including the origins of its ingredients and the ingredient that is causing the issue. With the source of contamination identified, the authorities can focus on recalling the products affected. US company Walmart did a blockchain pilot in China that enabled them to trace a package of mangoes from store to farm in a few seconds. Previously, this would have taken days or weeks.1

Another example is the detection of counterfeit products. Here in Australia, the wine industry has had examples of the damage such activity can do. In March 2018, Chinese police seized some 50,000 counterfeit bottles of Australian wine.2 Using blockchain, retailers can provide customers with indisputable proof of the provenance and authenticity of their products. A tech start-up in Australia is using blockchain technology to combat the counterfeiting of wine bottles exported from Australia.3

Modern supply chains can currently handle large, complex data sets. However, many processes still exist, especially those in lower supply tiers such as at the farm level in a food supply chain, or in the shipping industry, that are slow and rely entirely on paper.

For those who don’t know what a blockchain is, it is basically a chain of ‘ledger transactions’.

Imagine a bunch of blocks of transaction data (Figure 1). 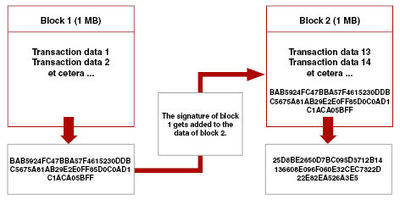 The result is that the chain can be stored in many places, available to public access (in the case of Bitcoin), yet it remains an immutable ledger of all the transactions. For a blockchain to work, all computing nodes storing the chain need to establish a consensus on the truth of the blockchain. It is protected from alteration by virtue of the fact that a change to even a single bit of data in a single block will dramatically change its hash function, and it will no longer chain with the next block.

So if Block 1 is changed it will no longer link to Block 2, making the alteration apparent to all systems and users involved in the chain. They therefore reject this change by shifting back to their previous record of the blockchain where all the blocks are still chained together. The only way to successfully alter data in a block is to then correspondingly alter every other block afterward without detection, which would be a formidable task.

There are, however, some who are saying that blockchain may not be appropriate for supply chains — at least not all of them — and those who have attempted it have struggled to get past a pilot phase.

According to a report published by Gartner6 in May, supply chain early adopters are failing to find suitable use cases. The report predicts that “by 2023, 90% of blockchain-based supply chain initiatives will suffer ‘blockchain fatigue’ due to a lack of strong use cases”. The report went on to say that most blockchain supply chain projects “have remained pilot projects due to a combination of technology immaturity, lack of standards, overly ambitious scope and a misunderstanding of how blockchain could, or should, actually help the supply chain”.

Information security: who has permission?

An essential feature of blockchain technology was that it was initially invented to support transactions in Bitcoin, a digital cryptocurrency that operates independently from a central bank, while offering more security than the banking system combined with instantaneous transmission via the internet. Bitcoin is an example of a ‘permissionless’ distributed ledger, residing in the public domain. As a result the Bitcoin blockchain has become increasingly large; however, validation of a single transaction requires only a few previous blocks. Due to the architecture, the parties involved are not known or trusted, but the blockchain itself remains secure from tampering.

In contrast to Bitcoin there are also ‘permissioned’ ledgers that are centralised and governed by ‘actors’, ‘nodes’ or ‘miners’, held outside the public domain. These private blockchains can be established for a smaller group of individuals or organisations to share among themselves. In most supply chains, the parties are known and trusted. The members of the supply chain are also unlikely to accept open access because its users don’t want to reveal proprietary details, such as demand, capacities, orders, prices and margins, at all points of the value chain to unknown participants, as would be the case in a public permissionless system. This means most supply-chain blockchains would need to be governed centrally and restricted to known parties who may be limited to certain segments of data.

There are a few challenges that need to be overcome before blockchain technology could be in widespread use in supply chains.

Not ready for prime time?

McKinsey and Company7 have suggested that companies need to consider all the facts before jumping in. They say that “blockchain technology may ultimately be a good solution for some types of supply chains, but it is not yet ready for mass adoption”. The company’s view is based partly on the fact that — as Gartner has also said — many pilots conducted so far have failed to deliver the expected value. Also, there are other ways to solve issues of traceability and full transparency, and the gap between blockchain’s current capacity and that needed by supply chains is still too large.

The McKinsey report8 suggests that blockchain is best suited to supply chains where participants are not known or trusted, since it can add trust, transparency and traceability. However, for supply chains with known and trusted players, a centralised database approach is generally more than adequate. Even though many existing supply chains use siloed databases that contain data with only limited traceability, nevertheless they do not necessarily need blockchain technology to solve such issues, as they can leverage existing technologies that are better suited to high-volume transactions.

It would seem that organisations need to remain cautious about early adoption of blockchain and not to rush into making it work in their supply chain until there is a clear distinction between hype and its core capability.

Digitalisation offers machine builders and manufacturers opportunities to increase their...