The Newcastle Coal Infrastructure Group (NCIG) is a consortium of half a dozen coal producers - Banpu Public Company Limited, BHP Billiton Group, Peabody Energy Corporation, Whitehaven Coal Limited and Yankuang Group Co Ltd.  In December 2012, the NCIG passed an impressive milestone, with 50 million tonnes of coal having been transferred at its Kooragang Island site since operations began in 2010.

Around 280,000 tonnes of coal can be received at the dump stations each day. Mined from Hunter Valley collieries, the coal arrives by rail at Kooragang Island where it is stockpiled awaiting transfer to ship.

Preventing dust problems is an important priority of NCIG. In order to contain dust now and in the future, Aurecon Hatch (on behalf of NCIG) engaged Tecpro Australia to provide a dust-suppression solution at the site of NCIG’s second dump station, DS02. This follows the success of a dust-suppression solution designed and fabricated by Tecpro 12 months earlier at NCIG’s first dump station on Kooragang Island.

In 2011, NCIG engaged Tecpro to design and develop a dust-containment system for its first coal loader to prevent dust from escaping the rail-dump hopper. 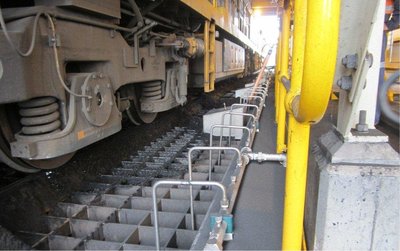 “We developed a unique system that generates a strong curtain of water to contain the dust within the hopper and prevent it from becoming airborne,” said Graeme Cooper, Managing Director of Tecpro Australia. “This was done using specially designed and fabricated nozzle droppers that are connected to stainless steel pipes laid both sides of the railway tracks. The entrapped dust is moistened by the water curtain and, aided by gravity, dust particles then fall back into the hopper.”

The dust-containment system developed by Tecpro proved highly effective in preventing any dust problems while the coal was being discharged from the rail cars into the hoppers.

Tecpro’s expertise in dust-suppression solutions was recently acknowledged in winning the Australian Bulk Handling Review Award for Dust Control, Technology, Application or Practice, in partnership with the University of Wollongong (UOW). Presented in November, the award recognised the innovative solution Tecpro and UOW developed to solve a persistent dust problem at Centennial Coal’s Mandalong Mine near Newcastle.

“Our first solution developed for the NCIG has been very successful in containing dust at the dump station DS01 and the team is confident it will do the same at the DS02 dump station,” said Cooper. “NCIG is proactive about protecting health, safety and environmental concerns and our dust-containment solution contributes significantly to that responsibility.”

Proof testing and a SIL study may no longer be enough during the operate and maintain phase.