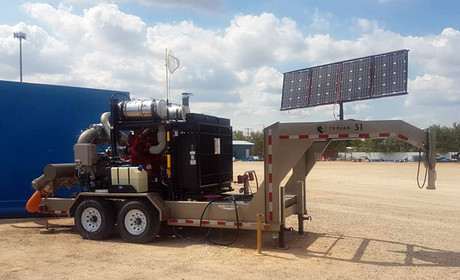 In the oil and gas industry, technological advances like hydraulic fracturing (fracking) and horizontal drilling have caused a boom in exploration and drilling. The initial ‘gold rush’ approach to oil and gas development focused on people resources, with most work done manually. Technicians and operators in the field checked all equipment and processes and manually adjusted and controlled whatever needed control. Even data required for environmental compliance was generally acquired by hand.

But today, with greater labour uncertainty and higher but volatile prices, investing in automation is starting to make more sense. Increasingly, companies are looking to add automation in the field, especially for water pumping and treatment — key ingredients in successful unconventional oil and natural gas production.

But automation for assets located over a broad area isn’t easy.

“Most automation companies don’t understand the network piece,” said Dan Arbeau, CEO of netDNA in British Columbia, Canada. With his background in automation, wireless, IT support and networks, however, Arbeau was ready for the challenge. He started netDNA in January 2018 and has since added partners for additional capital and resources.

The company’s focus is automating natural gas exploration and production, especially drilling. In 2014 Arbeau had automated a large pump for evacuating water from dams, a previously manual system that transferred water for fracking. The customer called again for help with a major project in the Permian Basin in Southern Texas, managing water at hundreds of drilling sites.

Water is essential for successful natural gas production by fracking. The process typically involves water at every step of the process.

“99% of jobs in the Permian Basin have water pits,” said Arbeau. “Water sources are often not close to the drilling site, so water must be brought in. Pits are used to store water, blend water, handle flowback and treat the used water. Until recently, all flow and level monitoring, pump control and the like were typically done manually.”

Technology is sparse and mostly ad hoc rather than planned — for example, a technician monitoring a level and texting an operator to adjust a pump. Automated pumps, flow meters and level sensors are needed everywhere.

netDNA customer New Wave Energy Services (NWES) provides a range of fracking products and services in the US and Canada, including water transport, modular tanks and buffer tanks. In an industry with remote, widely separated and changeable operations, mobility is essential. So NWES designed large trailer-mounted units for water transfer, typically with four 500–800 hp pumps with 12″ diameter inputs, and turned to netDNA to automate them.

Arbeau had used Opto 22 SNAP PACs (programmable automation controllers) on previous jobs. He appreciated their reliability and use of open standards, such as Modbus/TCP, for easier communication with other systems and equipment.

In addition, the EPIC pulls data from the genset controller, including RPM and associated telemetry, and publishes it to a central broker/server using built-in open-source tool Node-RED and the publish-subscribe protocol MQTT. As of June 2019, six trailer-mounted units were in operation, with several more in the works.

In addition to the trailer-mounted units, netDNA also automates monitoring and control for water pits and tanks.

Automating tanks improves safety as well as providing data faster, more easily and more reliably. Tanks are monitored for levels and pumps are controlled to make sure there are no spills. Tanks and pits are also monitored for air quality and hydrogen sulfide (H2S) levels. H2S is flammable and potentially deadly if inhaled. Instrumentation and automation help keep employees safe and improve environmental conditions.

At the pits and tanks, netDNA uses a SignalFire self-contained gateway for wireless sensors. The SignalFire talks Modbus/TCP to a local groov EPIC processor. Each EPIC publishes a variety of data tags from its pumps, again using Node-RED and MQTT. Production data is also tracked and historised. If a spill or issue occurs, producers need to know exactly what the pumps were doing at any given time.

“Some engine and pump companies are hungry for automation. Some have systems, but they don’t communicate with each other,” said Arbeau. “EPIC makes them talk.”

In addition to automated monitoring, control and data acquisition, the groov EPIC serves a custom web-based HMI for authorised technicians. netDNA developed the HMI using groov View, a tool included with the EPIC.

Each trailer unit is equipped with an IP radio device that provides routing, 100 m of wireless coverage and power for a cellular modem, which connects to the cellular WAN. With the groov View HMI, authorised technicians in the field can use a tablet to connect to this network and run all 20 pumps in a system of pits, monitoring or changing RPM, for example, from a single screen.

For data communications, netDNA takes advantage of the EPIC’s ability to use MQTT with Node-RED. MQTT is a publish-subscribe method of communication, and it has advantages for remote or wireless networks. If a network is low bandwidth, unreliable or expensive, or if distance makes a direct connection impossible, a pub-sub method is ideal.

Each client initiates communication to a central broker/server and then publishes data, subscribes to data or both. The broker/server does not store data, but simply accepts and forwards data packets as required. Network traffic is reduced overall, because data is communicated on a report-by-exception (RBE) basis — that is, only when the data changes, rather than at regular intervals.

netDNA is also interested in looking into using Sparkplug messaging with MQTT, available in the groov EPIC with Ignition Edge from Inductive Automation. Sparkplug encodes the data payload and compresses it. It also tracks the state of clients to make sure all clients can deliver and receive data.

The EPICs on each trailer, tank or pit publish data to the MQTT broker, and other EPICs subscribe to the data. For their broker, netDNA uses its own hosted secure MQTT server.

Each EPIC contains its own device firewall for data security. The data the EPIC publishes is device-originated behind its firewall, so no inbound port modifications to the firewall need to be made. Once the EPIC makes the connection with the broker, any return data the EPIC subscribes to is received securely over the same connection.

The system works remarkably well for remote, wireless control. Multiple pumps respond to sent commands within a second. To save bandwidth, netDNA sends data in tables instead of individual data points whenever possible.

With groov EPIC and modern IIoT tools at his disposal, Arbeau spent only three weeks from initial hardware design to having a full system ready for pump control. And due to netDNA, New Wave Energy Services can now offer customers monitoring and control that’s faster and less expensive than that offered by its competitors.

“It’s not that hard to outshine the competition,” said Arbeau. “EPIC is helping me be successful.”

For the future, Arbeau’s dream is a multi-use automation black box: an open-chassis skid with EPIC ‘in the middle’ and SignalFire connecting to wireless sensors. Arbeau envisions the skid used for projects not only in oil and gas, but also in agriculture, mining and other industries with far-flung assets that need automation and data communications.