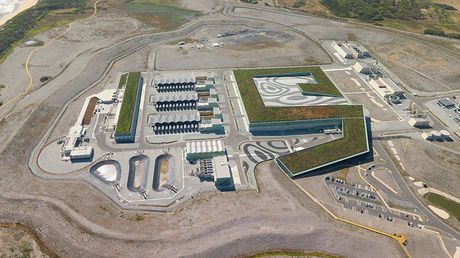 In June 2007, the Victorian Government announced its intentions to construct a desalination plant as part of its Water Plan, which would create a drought-proof supply of water for Melbourne and Geelong. The contract to finance, design, construct, maintain and operate the Victorian Desalination Project (VDP) was awarded in July 2009 to the AquaSure consortium.

The VDP comprises a reverse osmosis plant, marine structures which include two underground tunnels located 15 m below the seabed, a two-way underground 84 km water transfer pipeline and 87 km underground power supply. With a production capacity of up to 150 billion litres of water per year, the VDP provides a rainfall-independent source of water to communities throughout Melbourne, South Gippsland and Westernport.

Reverse osmosis is the desalination technology used at the VDP to turn sea water into fresh water, as it is also the most energy-efficient method of desalination. However, this is not the only energy-efficiency measure that was implemented. AquaSure introduced a number of innovative systems to ensure the plant operates as energy efficiently as possible. This included incorporating systems within the plant to minimise power consumption during the reverse osmosis processes and the plant’s compact modular design which reduces pipework and eliminates inefficient energy use.

The compressed air system was another area where AquaSure opted for equipment that possessed energy-reducing features such as variable speed drives and high-efficiency motors. Compressed air is used to power a number of processes within the VDP. One of the main requirements for compressed air on the plant, however, is to actuate a number of the more than 17,000 automated valves.

With the SFC VSD module, air delivery can be matched to actual air demand, according to the required system pressure, by continuously adjusting drive motor speed within its specified control range. This can lead to significant savings as only the required compressed air at any one time is produced, with a 1 bar reduction in pressure amounting to a 7% reduction in energy consumption.

From construction completion in December 2012 to the end of the contract in 2039, Watersure will operate and maintain the plant, seawater tunnels, pipeline and ecological reserve surrounding the plant site. The contract with AquaSure provides for flexible water ordering of up to 150 GL per year in set increments, enabling the state government to order water if required. When the VDP is not producing water, there is a comprehensive maintenance program in place which guarantees that the VDP is available to produce water when the need arises, making it an important part of Melbourne’s water security in times of future drought and to support its growing population and economic prosperity.

The Kaeser EBS 410 rotary screw blowers have been designed especially with water industry...

The DC series of desiccant dryers from Kaeser Compressors can lower the pressure dewpoint of the...

The Mobilair 500-2 is said to combine the advantages of a two-stage dry-running oil-free rotary...

A pinch of MSG instead of salt to reduce sodium intake?

High-tech potato processing line to be installed in Brazil