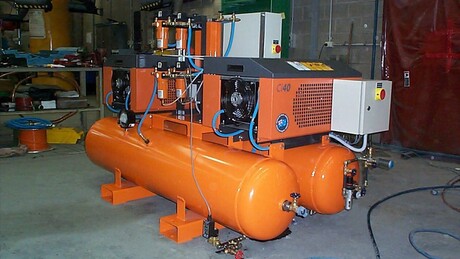 Developments in product design and advancements in technology mean that at some point, different elements of a piece of equipment will become redundant. When equipment is designed to last for decades or more, this can become problematic as parts age and repair, or replacement becomes necessary.

The Sydney Sullair Australia team experienced exactly this recently, and with the help of a long-term partner in Fluid Dynamics Melbourne, were able to customise a solution. The challenge began when Sullair was approached by its client, which has a pumping station onsite, delivering an essential utility to a consumer base. Their issue arose from a small hole in the oil/aftercooler, in a Champion Ci75 duplex compressor unit. Onsite the compressed air is used to power pneumatic controls and instrumentation involved in pumping.

This unit is an engineered product, installed onsite in the early 2000s and now discontinued, with replacement parts unavailable — including the oil aftercooler. In addition, replacement of the entire unit was not an option; it was too difficult to remove this particular machine from its current location for repairs to be made off-site, and it couldn’t be taken out of service as it is critical infrastructure.

Sullair Service Business Consultant Brett Dunlop oversaw the project, with the Sydney Spares and Service Team, and realised they needed to think creatively to develop an alternative solution. Because of the age of the equipment, along with it being designed overseas, there were no blueprints available for the parts to design from. In discussions with Sullair’s engineering unit, it was established that the only solution would be to have the part redesigned and remade from scratch, with an Australian supplier.

The first step towards this was to generate some drawings, so Dunlop reached out to a long-term Sullair partner — Fluid Dynamics in Melbourne.

“We didn’t have a blueprint or drawing, or an old example that we could manufacture from, and we couldn’t take the one that was onsite, so we were left with no choice but to draw it ourselves,” he said.

Fluid Dynamics designs, manufactures and provides heat exchange solutions, so was perfectly placed to assist Sullair in customising a solution for their client.

“We measured the cooler’s exact dimensions — where its mounting brackets were and its physical dimensions — and we drew it up on paper,” Dunlop explained. “Fluid Dynamics sent us the unit they designed from those initial drawings, and after a little tweaking, it was installed and was the perfect fit. The benefit of the Australian-based supplier is that refinements could be made and turned around quickly.”

Once the solution was installed, the customer expressed concern that the same issue might arise with the other cooler. The unit is a duplex, so there is a second oil aftercooler in the other cooler also. With the failed cooler now removed, it was available to be sent to Fluid Dynamics, giving them an exact model to design from moving forward.

“Fluid Dynamics used that as the blueprint instead of using the drawings, so the customer holds a brand-new spare in stock now, in the event that the cooler in the second compressor meets the same fate as the first one did,” Dunlop said.

The service offering here provided double benefit in that not only was the client’s initial problem solved but a preventive measure was also identified and implemented. The client has the spare in stock and can immediately action the solution in the event of a future failure. They can also order custom-designed spares in the future if either of the replacement coolers has issues. Dunlop said that having a local supplier to collaborate with enhanced the service delivery on this project.

The i.HOC compressors can produce dry compressed air at lower energy costs due to their...

Boge has now fitted some models of its C-series screw compressors with a permanent magnet motor.

The Scroll PX series compressors are available as a fully integrated, tank-mounted system...