Electronic pressure transmitters for all industries 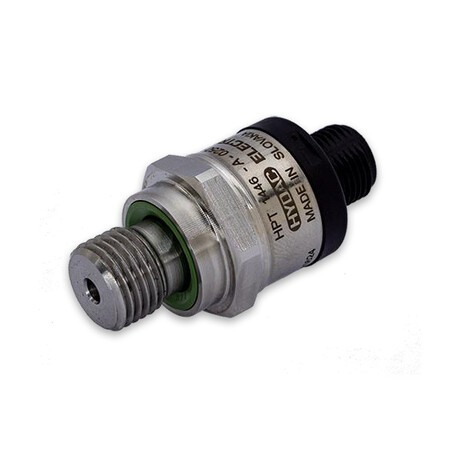 HYDAC’s HPT 1000 pressure transmitter is based on a robust and long-life thin-film sensor.

According to a HYDAC spokesperson, there are various options available for the analog and digital versions, including a standard version, a version with pressure and temperature, a smart version, and a version for functional safety.

“The variations available for the HPT 1000 include measuring ranges from 2.5 to 600 bar, thread variations as per the HDA 8000 series, and the M12 connector is basically the standard for industrial applications,” they said.

Accuracy as standard is 1% and 0.5% accuracy versions are available if necessary.

For connectors, HYDAC offers most typical connector types, except for large connectors and integrated cables due to the pressure transmitter’s compact size.

The analog version is available as a standard pressure sensor, with HYDAC also offering a pressure and temperature version, a version with smart information, and a safety sensor. Various analog outputs are available such as voltage, current and ratiometric.

As for the digital version, HYDAC offers pressure, temperature, smart and safety versions. HYDAC also offers a solution with an IO-Link digital interface or with ‘Can’ and ‘Send’ interfaces.

“The standard version sensor is Category 1 and, within a safety environment, Category 1 means there are no diagnostics,” said the HYDAC spokesperson. “The signal simply comes in one side and goes out the other side.

“The first stage is the sensor cell itself. This signal is then passed to a stage that amplifies and calibrates the signal, which means that it corrects any errors in the signal. This information is then passed to the output interface, which converts it to a signal type that's suitable for running along cables, which can then be interpreted by, for instance, a PLC.”

“The digital interface is the interface that also provides the additional information,” said the spokesperson. “The pressure signal is actually provided as an analog signal 0.5 to 4.5 V.”

The safety-certified versions meet safety requirements by including a diagnostic test within the sensor. This diagnostic test fulfils performance level SIL 2/PLd for functional safety.

“The output signal represents the health status of the sensor. If it has a fault then a safety PLC can interpret this and respond accordingly,” they added. “HYDAC is in the process of developing a performance level D Category 3 sensor, which includes two separate circuits; two Wheatstone bridges on the one sensor cell, with two 4–20 mA outputs. Diagnostics are then carried out by the safety PLC.”

The architecture of the standard digital version of the HPT 1000 is the same as the analog version.

“As to coding, if there is an A in the code then it’s 4–20 mA as per all the other sensors. It’s the same with the B signal, being 0–10 V, and the G signal is a voltage signal other than 0–10 V — normally for user-specific output signals.”

The spokesperson says R indicates a ratiometric output signal. “On the digital side, IO-Link is indicated by F31.”

The spokesperson says a common question is how the HPT 1000 is related to the company’s HDA 8000 series pressure transducer. The HPT 1000 was developed to offer a sensor at a lower price point than the HDA 8000.

Other pressure sensors in HYDAC’s range include the HDA 4000, the HDA 7000 and the HDA 8000. The HDA 4000 is still the standard sensor for many rugged applications such as in the steel industry, while the HDA 7000 has the advantage of being extremely small. The HDA 8000, with a slightly larger housing, offers a solution with a cable output or larger connector.

The new pressure devices from Endress+Hauser.

Until now, choosing an instrument was a laborious process and often involved a lot of questions...

Long-range laser sensors are a flexible solution for monitoring fill levels of granulates in silos.