Ultrasonic gas leak detection: what it is and how it works 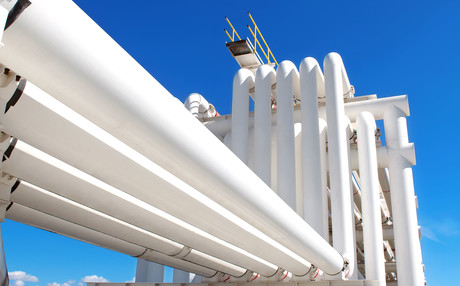 Ultrasonic gas leak detection differs from conventional gas detection by responding to the acoustic sound from the gas leak, not by sensing the gas molecules.

Ultrasonic gas leak detection (UGLD) has emerged as an effective means of establishing the presence of gas leaks. It works especially well in open, ventilated areas where other methods of gas detection may not be independent of ventilation. Because UGLDs respond to the source of the leak, rather than the gas itself, they complement sensors that measure gas concentration.

This article provides an overview of the operation and use of UGLD. The principles of ultrasonic detection and its strengths and limitations are also discussed.

Fixed gas detection in open ventilated areas like offshore or onshore oil and gas facilities is generally considered problematic because the gas easily dilutes and drifts away from conventional gas sensors. Ultrasonic gas leak detectors solve this problem by detecting the airborne acoustic ultrasound generated when pressurised gas escapes from a leak. When a gas leak occurs, the ultrasound generated by the leak travels at the speed of sound, through the air, from the source to the detector.

Ultrasonic gas leak detectors are non-concentration-based detectors. They send a signal to the control system indicating the onset of a leak. The use of UGLDs depends on the following criteria being met:

The main advantage of a UGLD compared to a conventional gas detector is that it does not need to wait for a gas concentration to accumulate and form a potentially explosive cloud before it can detect the leak.

The total speed of response for a UGLD can be calculated as:

Tdetector for a UGLD is the alarm delay time implemented on the instrument, commonly 10–30 seconds, while Tultrasound represents the time it takes ultrasonic noise to travel from the leak source to the detector. This is typically measured in milliseconds.

The response of the UGLD is not dependent on the gas to travel to the detector, which means that it reacts much faster to the dangerous gas leak.

Since the sound pressure level decreases over distance at a predictable rate, operators and engineers can establish detection coverage before ultrasonic gas leak detectors are installed. The location and number of detectors can be planned based on plant drawings when the facility is in the design stage, and UGLDs can be used to cover both large outdoor facilities and single installations. UGLD detection coverage also depends on the ultrasonic background noise level of the area and on the minimum gas leak rate to be detected.

For the purposes of sensor allocation, plant environments can be divided into three types: high noise, low noise and very low noise, as represented in Figure 1.

Figure 1: The detection coverage characteristics for UGLD. The distances are based on the detection of methane-based gas leaks using a leak rate of 0.1 kg/s as the performance standard.

From the illustration it could be implied that the detector detects gas leaks below ground, but this is rarely the case. The only instance in which a detector responds to gas leaks below ground is when the device is installed on a grid floor, which allows ultrasound to travel through the cells in the grid with minimum impairment. A UGLD may, for example, be installed on an upper platform deck while providing coverage to lower decks as well. In the same way the detector could be installed over the top of a separator tank and provide coverage over the top of the tank as well as down to the ground level.

As shown also, the shape of the detection coverage is the same for the three plant areas, but the maximum detection range varies according to ultrasonic background noise.

Detection coverage for high, low and very low noise levels as illustrated in Figure 2 is based on detection of methane leaks using a leak rate of 0.1 kg/s as the performance standard.

Note that for a more than 20 m detection coverage the leak would need to be greater than 1.0 kg/s, and that very low noise areas are generally only found in onshore installations.

Conventional gas detectors measure gas concentrations as a percentage of the lower explosive limit (LEL) or in parts per million (ppm). The performance of ultrasonic gas leak detectors is based on the leak rate, usually measured in kilograms per second.

Figure 3: The LEL level measured by a conventional gas detector depends on the leak rate (mass flow rate), leak directionality and where the sensor is positioned relative to the leak.

The term leak rate describes the amount of gas escaping from a leak per unit time. A leak can be considered large, for instance, if a large quantity of gas escapes every hour or every second. Conversely, a leak can be said to be small if a small amount of gas jets out from the pressurised system over a given period.

The leak rate, which defines how fast a potential dangerous gas cloud accumulates, can be divided into three categories according to hazard severity:

The categories developed by HSE1 in the UK are used to define the guidelines for UGLD. For methane-based leaks then UGLD must respond to small leaks at a minimum of 0.1 kg/s.

Notice a UGLD does not measure the leak rate. The leak rate is used to set the performance criterion, and in effect defines which leaks the UGLD must pick up. The UGLD provides a measure of the ultrasonic sound measured in decibels (dB). When there is a gas leak with a leak rate of 0.1 kg/s inside the detector’s coverage area, the sound level will exceed the trigger level of the UGLD and cause an alarm. As a result, in order to prevent injury or loss of life, UGLDs must detect methane leaks of at least 0.1 kg/s.

Leak size and influence on UGLD

The leak size influences the performance of the UGLD in the following way: the greater the leak size, the bigger the leak rate and thus the greater the detector’s coverage (assuming the gas pressure is kept constant). Some of the most frequently asked questions pertain to the leak size and whether the opening can be too small or too large to create adequate levels of sound.

The most important thing to understand is that the leak rate can derive from an infinite number of combinations of leak size and gas pressure. Gas properties also have some influence. As the hole becomes larger, the leak rate increases. However, with extremely large leaks it becomes more and more difficult to sustain the system’s pressure. When the system pressure starts dropping it causes a reduction of the leak rate and thereby decreases the ultrasonic sound level.

In theory, there is no limitation to the rule when the leak becomes small. However, to achieve the commonly used leak rate for methane of 0.1 kg/s for a leak with a small hole size such as 0.5 mm, the system’s pressure must be almost 3000 bar (or around 43,500 psi). Since tiny pinhole leaks are found in fittings especially on offshore facilities, UGLDs are neither designed for pinhole leaks nor for big pipe ruptures. Pinhole leaks increase in size over time and become easier to detect while pipe ruptures can be identified by the pressure drop. Instead of considering specific hole sizes or pressures, UGLD should be related to the leak rate.

Ultrasonic gas leak detection differs from conventional gas detection mainly because it responds to the airborne acoustic sound from the gas leak, and not by sensing the gas molecules. Two parameters are therefore fundamental to understand ultrasonic technology — amplitude and frequency.

In normal industrial plant environments there can be a wide variety of acoustic sound frequencies present or there may be only a limited number. Basically it depends on the process equipment installed in various parts of the plant. In some areas there is a complex mixture of sound frequencies at high amplitude (high dB level); for example, in spaces with turbines, compressors and other high-speed rotating machines. In other areas there is a simple mix of sound frequencies at low decibel levels. This is the case in process areas with no rotating equipment or in remote installations in outdoor locations.

In very noisy plant locations where the audible noise level may be around 95 dB (very loud), the ultrasonic sound level will, as a rule of thumb, be 20–30 dB lower (65–75 dB) simply because the machine-made noise does not generate a lot of ultrasonic frequencies — only a lot of audible sound frequencies.

For this reason, UGLDs can be installed in very noisy locations without interference from the normal audible background noise.

Ultrasonic gas leak detection (UGLD) is a very effective means of establishing the presence of gas leaks that is commonly used in chemical, power plant and numerous oil and gas applications. It features a rapid response rate, is unaffected by audible noise and works especially well in open, ventilated areas where other methods of gas detection may not be independent of ventilation. The main advantages can be summarised as:

The choice of detection method for monitoring toxic gases in industrial settings has been a...