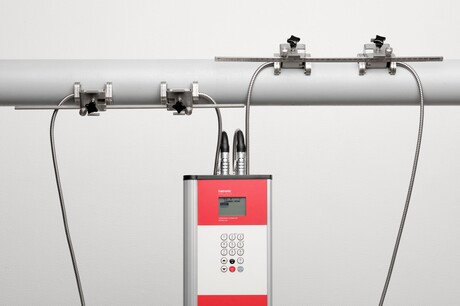 One of the assumptions made when installing a flowmeter is that the instrument is in a location where there is a stable and undisturbed flow. However, the reality is that accessing such ideal measurement conditions is often difficult, or impossible. Disturbances in the flow profile could be caused by numerous things but generally are a result in a change to the pipe through which the liquid is flowing. This could be a change of angle or plane through bends, a change of diameter through a reducer or diffuser or some other process equipment such as a valve or pump. These changes in fluid condition cause the flow profile to shift with the point of maximum fluid velocity no longer being located in the centre of the pipe.

Localised flow profile changes resulting from these pipe modifications will cause problems for most flowmeters installed in the same area. The cause is that regardless of the measurement technique used, there is an assumption that the observed flow condition is happening at the point of fastest flow and that no other outside influences are in play. The initial question is therefore: what can be done to identify when disturbances to the flow might be happening, and then secondly to offer an appropriate solution?

It should be mentioned at this point that certain measurement technologies are more immune to this effect than others. Coriolis flowmeters, for example, calculate flow and density based on the vibrations of the internal tubing within the meter body and as such are not constrained in the same way as other instruments. Users of clamp-on flowmeters, along with many other devices, need to consider the flow condition looking at potential locations for meter installation.

Several of Katronic’s flowmeters are able to connect to two pairs of sensors simultaneously. This gives the user the opportunity to either measure on two pipes at the same time or alternatively, mount two sets of transducers to the same pipeline.

There are two occasions where this can be of benefit to the user:

Using green hydrogen as a sustainable fuel source is generating great interest as companies and...

With the availability of condition monitoring sensors and technology, we can better plan for...

Vibronic point level instruments, popular since the 1980s, can now diagnose themselves, meet...