Blue laser vs red laser triangulation sensors: which is better? 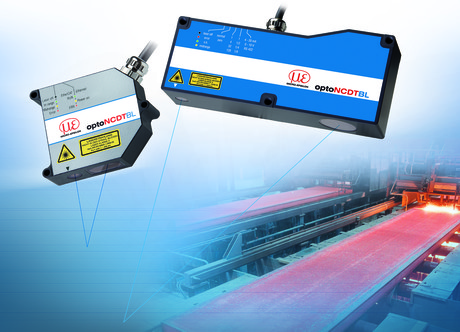 Laser triangulation sensors are one of the most sought-after non-contact sensor technology for measuring position, distance, level, displacement, proximity and profiles of objects. They are widely used in industrial process automation and control, as well as for test and measurement in process monitoring and validation. Currently, two technologies are available: red and blue laser sensors. The conventional red laser sensors are suitable, and offer good measurement stability, for most applications. However in some applications, blue laser sensors provide better performance.

Blue laser triangulation sensors are suitable when accuracy cannot be compromised. The blue laser with a shorter wavelength does not penetrate or diffuse into the target surface — which can lead to a lack of focus that causes inaccuracy. Choosing which laser type to use may depend on the type of surfaces, target materials and required measurement speed.

As red laser penetrates deeper onto the target surfaces as compared with blue laser, it substantially increases the area of blurry region that is reflected back to the detector. This can cause the detector to not be able to detect the exact distance to the surface. This effect is minimised when used for measuring objects with matte or low-reflective surfaces.

In the case of blue laser sensors, the light being reflected back to the detector is minimised due to the shorter wavelength. Blue laser sensors perform well when used for measuring objects with shiny, reflective or highly-polished surfaces. For shiny surfaces, the shorter wavelength of blue laser generates much less speckling and a lower noise level (by a factor of three) when compared to the red laser.

Red laser sensors also have limited use in measuring hot and glowing objects. A hotter object generally emits a high radiation intensity at a wavelength similar to that of the red laser, resulting in undesirable noise. This effect does not apply for blue laser as it operates at the opposite end of the visible light spectrum. The sensor will generate stable and accurate signals, unaffected by the object temperature. Blue laser sensors also triumph over red lasers when used for measurement on organic, food, transparent and translucent materials.

In summary, both blue laser and red laser triangulation sensors offer similar capabilities with one sensor more suitable than the other under certain conditions. Both of them can also be used for measurement of 2D and 3D profiles of objects. To select an appropriate sensor technology, the questions to be asked should be:

Contact Bestech Australia at 03 9540 5100 or enquiry@bestech.com.au for more information.

The PS+ series pressure sensor offers a local display as well as electrical outputs to provide...

A guide to selecting a displacement sensor

Sensors are essential to provide accurate measurements of physical parameters, such as...

Lactalis automates the handling of its milk pallets