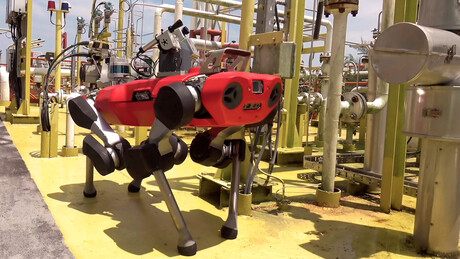 Swiss robotics company ANYbotics, recently awarded the Swiss Economic Award in the category Hightech/Biotech at the Swiss Economic Forum 2020, is making inroads into the process industries with its ANYmal industrial inspection robot.

The first production batch of ANYmal C robots was delivered to engineering partners and research customers worldwide in June, marking a significant milestone for ANYbotics as a mobile robot manufacturer as well as an important step in what the company says will revolutionise the industrial inspection and maintenance workflow.

Since the launch of the new ANYmal C robot last year, the ANYbotics team has been focusing on a growing number of partnerships with several key industry vendors and operators. Through performing test installations and pilot projects for diverse inspection tasks, ANYbotics is preparing for completely unsupervised installations.

As a multi-purpose robot platform, ANYmal C is expandable to tackle a wide range of applications. It can carry up to 10 kg in payload, has built-in communication and power interfaces, and a dedicated onboard computer with APIs based on the open-source Robotic Operating System (ROS).

ANYmal C’s legs provide mobility when moving  up and down stairs; climbing over obstacles, steps and gaps; and crawling into tight spaces, and it has perception sensors that allow for a safe operation. Simultaneous localisation and mapping (SLAM) provides the system with an accurate position information even in complex and dynamic environments. It fully autonomously navigates through complex multi-floor environments, remembering every corner, and finds the quickest route to perform its mission. During operation, the system safely avoids obstacles and reliably moves over rough terrain.

An onboard battery enables continuous operation for 2–4 hours depending on the activity and the robot connects to a docking station by itself and without operator interaction. It is also IP67 water- and dust-proof and the ruggedised enclosure protects the system from impacts.

The company says that since its market launch, ANYmal C has caught the eye of key players in the energy, chemical, mining and construction industries that target to bridge the gap between their digitalisation needs and existing solutions. Manual data collection by human inspectors is an effortful and error-prone task, especially in large-scale, remote or hazardous environments. Achieving full coverage is very challenging with fixed sensors and problems such as leakages, rust, hotspots and missing equipment are hard to detect without human intervention. Having autonomous mobile robots onsite will fundamentally change the inspection strategy of operators by elevating the digitalisation of industrial plants to a new level.

Making offshore operations safer and more efficient is key to the future development of the energy industry. Together with one of its partners, ANYbotics is combining its expertise in building four-legged robots with challenging operation needs during a multi-week autonomous offshore deployment of ANYmal C. This follows a successful proof-of-concept, where ANYmal C performed routine inspection tasks to monitor machine operations, read out sensory equipment and detect thermal hotspots and oil or gas leakages, proving the capabilities required for offshore deployment.

“Reducing monitoring tasks will reduce our need for operators to conduct inspections, which not only moves people away from dangerous processes, but also significantly lowers the cost of our offshore operations,” said the CTO of an energy company collaborating with ANYbotics.

With the ANYmal C four-legged robot, the company is able to perform autonomous routine inspections on their offshore platforms and consistently receive reliable equipment and environment data. Initially installed on a manned platform, ANYmal C will be eventually deployed on unmanned platforms. These are designed to be primarily operated remotely, without the constant presence of personnel. However, most plants still have to be visited weekly, generally for inspection and maintenance, and particularly for unplanned shutdowns caused by dangerous weather conditions.

“Our goal is to reduce human intervention on our unmanned platforms, but sometimes the value from the sensors could give false information, so visual confirmation is extremely important and would provide additional confidence to our operators,” added ANYbotics’ partner spokesperson.