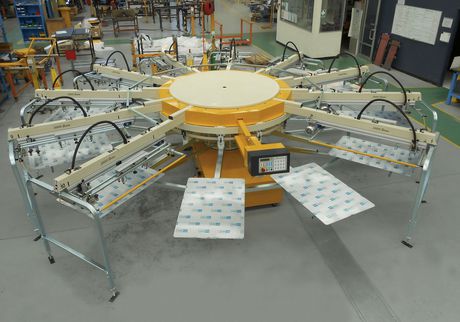 It’s not that often that we hear a good news story of an Australian-owned machinery manufacturer producing machines almost exclusively for export. But this is exactly what one Melbourne-based company has been doing for more than 40 years!

The machines they produce are large carousel screen printers, used primarily for the textile industry. They print images directly onto fabric substrates, which are typically T-shirts, tea towels or larger articles like umbrellas and beach towels. A variety of machines are made, depending on the article size and printing capacity required.

Each machine has between 8 and 22 arms that extend radially from a central rotating mechanism, which is indexed by a variable speed drive (VSD). Each arm has a horizontal plate mounted on it, with a print head that prints a single colour by wiping an ink squeegee over a screen mask. A 0.4 kW VSD makes this movement. An ink flood bar applies a reverse wiping action to prepare for the next print. The machine then indexes so that the next head can apply another colour. Printing is finished once an article has traversed all the heads and all the colours have thus been applied.

The company is highly successful and has established a reputation for building robust and reliable machines that are easy to use. However, like so many OEMs, it found its customers were demanding ever faster throughput for greater yields and less waste.

While little could be done about the printing process, a significant improvement in performance could be achieved if the indexation time could be reduced. However, the motor/gearbox combination was already running at capacity and both the physical space available and extra costs precluded anything larger and jeopardised the machine’s viability in the marketplace.

The first attempt was to drive the motor harder during indexing. Unfortunately, with the mechanical system already at capacity, this resulted in a dramatic increase in drive errors and the shortening of the drive’s life! Clearly, a better drive system was needed.

It was at this point that Chris Probst, Omron’s product manager for drive products, analysed the load requirements for the largest machine, which had 22 arms, an 8760 mm-diameter footprint and a weight of 4700 kg. A gearbox was needed due to the very high inertia of the 1500 kg rotating mass that needed to be indexed.

Standard induction motors, as used here, exhibit non-linear torque and speed characteristics as their load changes. Also, VSDs have traditionally had difficulty producing sufficient torque at low frequencies due to the nature of their operation. However, both limitations can be improved considerably by using a VSD in sensorless vector control mode.

Probst decided to change out the standard VSD in favour of a 4 kW Omron 3G3MX2, running in its sensorless vector control mode. As Probst explained: “Vector control drives enable greater and more dynamic control over motor torque/power because the VSD independently controls motor speed and torque. This results in ordinary induction motors operating more smoothly and with faster acceleration and deceleration when compared to typical VSD voltage/frequency control.” Furthermore, this model VSD can also produce 200% of its rated torque at 0.5 Hz output frequency.

But there was another feature in the 3G3MX2 that proved vital for this application: drive programming. Using the inputs and outputs built into the drive, sensors in the field can be connected directly to the drive and acted upon by its internal program. It was found that the starting and stopping of the machine during indexing could be controlled more quickly and precisely by the built-in program, giving a competitive advantage.

One consequence of the improved indexing times was additional regeneration resulting from faster stopping, adding energy to the VSD’s DC bus. With some simple analysis by Omron’s CX-Drive diagnostic software, the required regeneration braking resistor capacity was calculated and applied to the machine.

The end result of the faster indexing is that yield has improved by 25%, to around 1000 articles per hour. Nearly all of the 100 machines produced each year are exported and, ironically, most of the most countries buying them have thriving rag trades!

The ALTA propane tank monitor has been developed to enable propane distributors and energy firms...

The CMS 700i meters the contour and position of passing objects regardless of their shape and...

The IPS 400i camera-based positioning sensor is designed for optical compartment fine positioning...