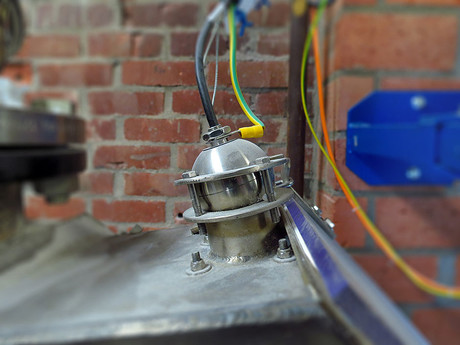 Covestro is a producer of advanced polymers operating three different production sites in Germany. Focus is on the manufacture of high-tech materials using the latest technologies, while meeting the highest safety standards.

At the company’s facility in Dormagen, one of the substances being produced is the high-performance adhesive DESMOCOLL (a polyester/polyurethane polyol), which is needed for a great variety of adhesive compounds worldwide. The manufacturing process of this adhesive is complex requiring constant control at various production steps, since the medium’s state is very volatile.

In three production lines, the product is synthesised in a continuous process under potentially explosive conditions. Therefore, constant condition monitoring is of the utmost importance due to the product’s very fast curing times. If the product hardens too rapidly, the result may be unavoidable repair works in the piping system and, consequently, production downtimes.

In the past, on-site inspection and documentation of the production process was carried out by a staff member patrolling 11 particularly critical spots every 30 minutes — a labour- and cost-intensive operation. Simultaneous monitoring of all critical control points was not possible.

As part of automation and to meet the highest safety and security standards, Covestro has opted for a CCTV solution: onsite continuous video monitoring of the production process combined with simultaneous monitoring at a central control centre.

R. STAHL has provided a CCTV system solution for onsite monitoring of these 11 at-risk points using its EC-710 compact cameras for use in hazardous areas. Due to its small and compact design (with a diameter of only 55 mm), the camera has the advantage of being easy to integrate within the inspection window monitoring process. The EC-710 compact camera is ATEX-certified and has been designed for extreme temperature applications, approved for operation in temperatures up to +75°C and thus fully meets the temperature requirement of +60°C.

This type of camera is available in different versions featuring seven different viewing angles (81° wide to 11° telephoto), so that each type of reactor may be provided with an appropriate camera solution. In addition, the CCTV solution integrates visualisation, both onsite and at the control centre, to ensure simultaneous monitoring.

Using hazardous area cameras has helped Covestro significantly reduce staff work and thus labour costs, so that the investment in the CCTV system has produced ROI within a short period of time. Furthermore, continuous monitoring and documentation of all critical points has now become possible. Simultaneous monitoring both at the control centre and onsite now allows for prompt detection and troubleshooting of any critical changes in the medium, thus reducing downtime, preventing repairs, and saving time and money.

The process images of all cameras are displayed on three 24″ HMIs, designed as panel PCs. Images and videos are displayed on these widescreen monitors with 1920 x 1200 resolution in an easily readable size. Due to the simultaneous display of the inspection window images, it is much easier for the staff working onsite to detect any deviations in the process in case of any unexpected changes in the product status. Thus, clumping of the material or even blocked pipes can be prevented.

The overall CCTV system is operated using the video management software SeeTec Cayuga, providing crisp and clear video images on one monitor. With a clear user interface, staff are able to operate the system within a short period of time and to quickly and directly react to any unexpected events, without having to deal with any complex operations. Thus, it represents a good combination of a modern operating concept with tried and tested functionality and ergonomics. In the night mode, for example, colours are changed to improve readability; it is also possible to configure alarm settings, which, in case of an alarm, are activated by keystroke.

The CCTV system in the hazardous area is designed as an open system, making it expandable with further cameras as and when required. Our other explosion-protected cameras such as the zoom or thermal imaging cameras, existing camera types as well as PCs, servers or switches can also be integrated into the system.

The C7015 compact industrial PC is designed to be a high-performance IP65/67 device designed for...