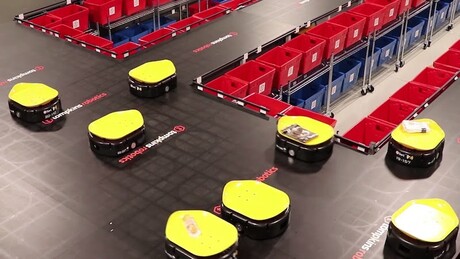 If you’re like many, you might envision a robot as a large, heavy, steel system that’s bolted to the floor, with an arm twirling in a repetitive motion performing some task of sorting or tagging. The machine is stationary. It stays in one spot, performing the same function, day after day.

Let me tell you: that’s your grandad’s robotics. Today, the supply chain relies on a growing fleet of small, automated robots that are portable, scalable and modular. They’re also configurable, so their jobs can change as needed by their users, whether it’s warehouses or distributors, retailers, manufacturers, third-party logistics providers, freight shippers and so on.

However, aside from their form and function, there’s another underlying assumption that plagues the robotics industry right now, too. That is, that robotics and automated machines aren’t just playing the role of product sorter and mover, but that they’re gobbling up warehouse workers’ jobs en masse; that retailers and distributors are wheeling new robots in through one side of a facility and handing pink slips to their employees on the other side.

This also couldn’t be farther from reality. In fact, robotics in the warehouse are filling gaps in the supply chain that otherwise wouldn’t be filled, and thus staving off even more disarray than what we’re already seeing.

At the same time that labour availability has become so constrained, the amount of work created by fulfilling e-commerce and online demand has spiked tremendously. Businesses already can’t find enough personnel to do the work that’s already there, let alone pivot their operations and handle the tidal wave of e-commerce that came flooding in amid the COVID-19 pandemic.

Think about the labour required to fulfil an order that consists of just one to two items. It’s much more intensive than a whole case of the same product arriving at a store and being put on a shelf. In that situation, the consumer handles much of the labour. They drive to the store. They pick the item off the shelf. They carry it to the checkout and they drive it home.

For an e-commerce order, that string of events obviously looks different, but roughly the same number of steps apply — only they’re performed by the seller, not the buyer. An example would be a staffer in a warehouse must go to the appropriate bin, pick out the item, package and box it, label it for sending and so on.

E-commerce demand has pressed companies to reconfigure their operations. They couldn’t simply restaff overnight. They had to retrain their existing employees on new protocol and new procedures, and they had to turn to new tools — modern robotics systems — to help bridge the gaps. It allowed companies to continue to meet their product delivery expectations without the need for building new facilities or overextending their resources and personnel.

The number of people employed at a facility does not drop when their boss adopts modern robotics. Instead, it empowers all involved to get more volume out of the same amount of warehouse capacity. And with some facilities already operating at 50% turnover and constantly onboarding and training new hires, machines have helped keep operations running smoothly throughout this time of great staffing uncertainty.

So how far are we from so-called ‘lights out’ operations? That refers to a situation where there are no humans in a facility and robots do all of the work, so facilities can effectively turn off the lights, since robots don’t need to see. Well, in my opinion, we’ll likely never get there. Machines play an important role, and an increasingly important role, in the modern supply chain, but they’ll never replace some of the tasks we need our essential employees for.

Swelling e-commerce and online ordering have certainly accelerated the deployment of robotics in the warehouse, but these machines aren’t replacing human personnel. If anything, they’re allowing retailers, manufacturers, warehouses, distributors and 3PLs to better utilise their resources and better position their employees for the future. That’s a win for everybody.

*Mike Futch is the President and Chief Executive Officer of Tompkins Robotics, a manufacturer of robotic automation systems for distribution operations that has been recognised for its core system, the t-Sort autonomous mobile robot solution, which was recently implemented by K-Mart Australia.

Research by IoT Analytics GmbH on smart factories shows that there are some common misconceptions...

PLC vs embedded control: which one is best?

PLCs have been at the core of almost any automated system for many years; however, embedded...