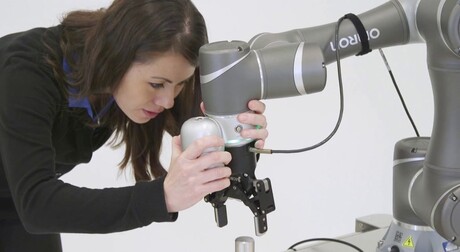 There’s nothing new about industrial robots! In fact, they’ve been used in manufacturing since the 1970s — the automotive industry being one early adopter. Articulated arms were the most common robot type, which were used for tasks like welding.

The 1990s saw the emergence of parallel (or ‘spider’) robots with fixed inverted mountings, as well as SCARA (Selective Compliance Assembly Robotic Arm) types. These were used mainly for pick-and-place applications, such as loading product into packaging. AGVs (automated guided vehicles) also started to be used around the same time, to convey goods along a single, fixed path. Dedicated areas needed to be zoned off for AGV use, and tapes laid on the floor along the route.

The advantages of automating tasks with robots, instead of manual labour, are well understood. Robots can perform repetitive tasks faster and more efficiently than humans. They can do so without breaks and can operate 24/7 in environments that humans find harsh and inhospitable. Thus the motivation for industry (manufacturing in particular) to employ robots has always been high. This is especially so for countries with high labour rates and diminishing skilled workforces — a growing problem in recent years. Furthermore, with markets becoming more global, competition among manufacturers has never been greater.

However, up until the last decade or so, robot use was mostly confined to large organisations with significant investments in assembly lines. Costs were very high, even for medium-sized operations, and ROIs too long to be considered economically viable. Also, robotic programming and maintenance was considered somewhat of an esoteric science. Detailed information was highly proprietary to the original supplier and difficult to come by; as were staff with the necessary skills to manipulate robots.

These factors proved to be significant barriers for robot acceptance.

However, there’s little denying the rapid rise industrial robots have enjoyed over the last few years. Not only have traditional users of robots been more active, other industries are finding new applications for robots, applications that did not exist even a few years ago. What has changed to cause such a sudden and dramatic uptake?

Undoubtedly, the single biggest factor driving the surge in robots has been the significant fall in prices. Surveys have shown that SMEs hereto believed robots to be unaffordable and therefore didn’t consider using them. But lower purchase costs have reduced the ROI to such an extent that robots have become feasible.

The expansion of the robot market has caught the attention of both automation and robot vendors. They have ramped up their development efforts, resulting in better and more versatile product offerings. The involvement of the traditional automation vendors in the market has also improved the integration between robots and the control systems that run the rest of the plant, which had been an impediment.

Just about every aspect of robots has seen improvement over the last decade, with faster computing hardware delivering ever-increasing processing power. The servos used within robots are now more accurate, as are the visual inspection systems robots rely on to ‘see’ the real world. But it’s the software systems used to control robots that have perhaps seen the biggest changes. Development times for robot projects have reduced enormously due to the significant advances in development environments and better simulation, including integration of CAD software.

A more recent innovation has been the introduction of artificial Intelligence (AI), which allows robots to make better, more human‑like decisions, resulting in better outcomes for the user.

The types of robots on offer has also increased: industrial robots are not restricted to fixed installations anymore, as intelligent mobile robots now exist to transport goods around a premise. They can determine their own route and can detect obstacles in their path (such as closed doors) and navigate around them. They can also operate as a fleet, where they’re controlled from a central management system that determines their most efficient routes. The carrying capacity has also increased significantly: some up to 1.5 tonnes! Mobile robots are now being used in hospitals to safely transport medical equipment and autonomously disinfect facilities to protect staff and patients.

Collaborative robots (often called cobots) are a recent addition to the modern workplace. They are designed to work side by side with humans, without the need for safety barriers. By combining the best aspects of robots (performing repetitive tasks) and humans (thinking to make decisions), they achieve outcomes for users.

Harry Mulder is Engineering Manager for Omron Oceania, a global leader in industrial robotics and automation.