The recent rise of robots in manufacturing 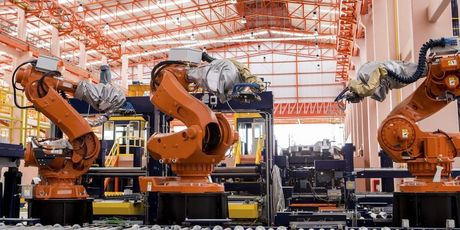 One of the most significant developments in industrial automation technology has been the proliferation of robots in manufacturing. It has been most exciting to see, as robots will undoubtedly provide substantial productivity increases. There are numerous reasons for the increasing acceptance of robots — lower costs and functionality improvements are two factors, but there are other drivers.

In the past, robots were handled by companies dedicated to their implementation. They worked largely in isolation, detached from the rest of the process they operated in. Robotic programming was seen as a somewhat esoteric science. Kinematics, the physics of objects moving in three-dimensional space, invariably involved complex mathematical calculations and was considered beyond all but the most qualified engineers.

But this has dramatically changed recently. Perhaps the biggest breakthrough for robots into the mainstream has been the integration of their programming into standard industrial controllers. The science and calculations have moved away from low-level manual work and into discrete, self‑contained function blocks (FBs). These FBs handle all the low-level details, abstracting them away from the programmer and allowing them to concentrate on the rest of the control system.

Robotic FBs are like any other IEC61131 compliant FB, leveraging off this well-established industrial programming standard. They are therefore immediately recognisable to automation engineers and will seamlessly integrate into their programs. So when a robotic FB is used in the ladder diagram language, they are powered by input contacts and manipulate output coils, just like any other FB. Similarly, when used in structured text, they receive input parameters for operation and assign results to output parameters.

But this is not to say the complexity of the mathematics involved has diminished. By no means! Take for example conveyor tracking, where robotic movements need to be synchronised to a moving workpiece — a common pick‑and‑place procedure. It requires data from an advanced vision system to be calibrated (which provides ‘eyes’ for the robot), considerable number crunching to calculate the kinematic transformations, and synchronous output to all the servos that control the robot. As a single controller can handle multiple robots, this same procedure can be iterated several times per cyclic scan! To achieve reasonable accuracy, this all needs to be done at high speed, requiring an advanced processor and an extremely fast control network. However, programmers are mostly unaware of these activities, as they happen behind the scenes.

Having a single controller that supports both standard control operations (eg, sequencing and logic) and robotic functions makes good sense. Many robotic movements need to be interlocked with the rest of the control system, especially the mandatory safety-rated ones. Programming is greatly simplified by utilising the same languages engineers are already familiar with and that the rest of the control program already uses. Fault‑finding is enhanced too, as all warnings and errors are generated from the one source, requiring a single tool set.

The recent surge of interest in robotics for manufacturing has been most exciting. It has been driven by numerous factors, but the demystification of robotic programming, its integration into standard industrial controllers and the use of the now-entrenched IEC languages have all been critical influences to robots becoming mainstream.

Harry Mulder has been involved in the industrial control industry almost 30 years, the last 25 years spent at OMRON Electronics. With a degree in computer science, his experience includes sales, engineering and product management. He currently manages engineering and marketing teams in Australia and New Zealand but still enjoys getting involved with day-to-day problem solving.