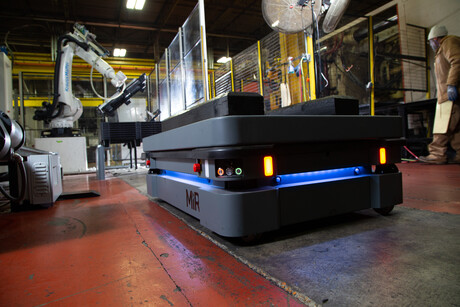 Leveraging the IoT and 5G in smart connected ways will make it possible to build a strong technology infrastructure to support autonomous robots.

The profound impact of industrial robots on intralogistics was underlined in 2020 when COVID-19 increased the pressure on supply chains and infrastructure. New consumer and commercial behaviours are likely to remain in place, with increasing demand for e-commerce and on-demand delivery, facilitated by the streamlined workflows that robots can execute.

Australian manufacturers can leverage the recent supply chain disruptions to revitalise the local manufacturing industry. It’s no longer true to say that offshore providers have a competitive advantage over local businesses; offshore vulnerabilities have been laid bare in recent months and local supply is more attractive than ever. To capitalise on this opportunity, Australian manufacturers and warehouse and logistics providers need to maximise efficiencies and manage safety concerns.

Robots have been used in manufacturing for six decades. From the first industrial robot, their mission has been to streamline processes and introduce efficiencies for manufacturing operations. By automating dangerous, repetitive or exhausting tasks, robots can free up personnel to add more value in a manufacturing environment. Working alongside robots has never been safer and, indeed, the robots themselves are also now actively involved in making the workplace even safer for humans.

It’s essential to have a strong technology infrastructure underpinning autonomous robots to ensure they can deliver maximum value at scale. This is where the IoT and 5G come into their own.

The Internet of Things (IoT) is a network of objects that can collect and transfer data over a wireless network without human intervention. Often, these objects are sensors that can communicate crucial information about a machine or environment. For example, air sensors can alert air conditioning systems of air quality and temperature, triggering the air conditioning system to switch on or turn the temperature up or down.

5G is the latest iteration of wireless connectivity, providing ultra-high-speed data transmission and capable of connecting 10 times the number of devices compared with 4G1. 5G will become the underlying fabric of a modern ecosystem fully connected by intelligent sensors and devices. When the data from sensors can be communicated almost instantly, the connected systems can respond faster. This could lead to more widespread adoption of technologies that currently seem futuristic, such as self-driving cars or driverless trains, for example.

As the IoT expands and 5G becomes available, the power of robots to improve manufacturing operations becomes even more pronounced, especially as current challenges like poor Wi-Fi connectivity become obsolete. Faster responses from robots to commands triggered by sensors or other connected devices can dramatically improve efficiency and output while reducing errors and waste.

When deploying robots into an IoT-rich environment, the productivity of both the robot and the environment can increase significantly. Letting the robot communicate directly with other pieces of equipment removes bottlenecks and streamlines workflows. For example, robots connected to production systems or point solutions can be automatically sent to retrieve a finished good from the production line or move products or raw materials to the next stage in their manufacturing cycle. At the same time, robots are continuously learning, so they can be aware of other moving objects within the facility and optimise movements, further increasing productivity.

For example, connecting an artificial intelligence (AI) camera to the network can greatly assist in traffic management. The camera can identify the periods of increased activity in certain spots, then direct robots to avoid that area, taking alternative routes to avoid congested areas and get to where they need to be faster. This AI works hand in glove with sophisticated avoidance systems which include onboard micro laser scanners, 3D data cameras and dynamic safety fields.

COVID-19 created a need for humans to be able to work together without coming into physical contact. Industrial robots integrated with information from IoT devices are ideal for this scenario as they reduce the need for peer-to-peer contact, in turn reducing the risk to an organisation’s workforce. And, because these autonomous robots don’t need to follow physical or pre-set guidance tracks, they can be deployed quickly and can be flexible in decision-making when it comes to the routes they take throughout the facility, maximising productivity.

In recognition of these potential benefits, research indicates that around half of surveyed warehouse organisations were looking to implement autonomous mobile robots (AMRs) within the next two years2. Future warehouses will gravitate away from forklifts, automated guided vehicles (AGVs) and other manually operated vehicles towards AMRs as organisations embrace the concept of automation as a way to cope with unexpected challenges as well as boost productivity.

These robots will not replace the need for people in manufacturing or warehouse and logistics facilities. Instead, they will make it possible for people to apply their creative and critical problem-solving and decision-making skills to have a real impact on operations beyond manual labour. This is likely to lead to fewer injuries, less lost time and deeper engagement from employees.

The combination of the IoT and fast 5G speeds means that devices including industrial robots will be able to communicate with each other in real time. This has significant implications for their use in manufacturing and warehouses, as they will be able to respond instantly to external stimuli. For example, an autonomous mobile robot may be able to digitally communicate with an autonomous forklift made by a different manufacturer. Rather than both robots having to adjust their trajectory to avoid each other, one will be able to take a different aisle or route to ensure a more productive environment.

Using 5G will also let autonomous robots leverage cloud-based AI platforms for faster decision-making and more effective planning and execution of tasks. This, in turn, can dramatically improve the quality of picking and packing, ensuring the right orders are sent out at the right time, and reducing or even eliminating double handling.

Utilising these technologies can also be a key component of meeting sustainability goals as it can drive waste reduction throughout an organisation’s value chain. By using 5G’s speed and broad accessibility in remote areas, real-time data can be leveraged to run complex scenarios, optimising decision-making in the manufacturing process in real time, minimising the potential for manufacturing waste to be produced.

Machine-based sensors can also be combined with wearable sensors worn by the people in the facility to create an even more connected environment. This could be as simple as using a data collection method to find out how far people are walking each day, then using that data to map ways for the robots to help reduce the amount of walking they do. For example, the robot could bring materials to workers and then take away their finished output, all without the worker having to leave their station. This reduces the time that’s wasted while employees are walking to retrieve materials for example, helping them focus their energies on their core task and increasing their physical output. The robot would know what to pick up, from where, and when, based on data provided by IoT sensors and integrated with the organisation’s manufacturing execution system (MES).

An on-premise MES can be expensive and inflexible. However, with the advent of 5G, these systems can be cloud based, which makes them more accessible and flexible, especially when it comes to using them to help feed information to autonomous robots.

When businesses rely on their autonomous robots for mission-critical activities, any unplanned downtime is unacceptable. Maintaining and optimising these robots is easier and more effective with real-time data capture and analysis, along with remote monitoring and control.

For example, IoT sensors can be configured to send alerts if the robot’s battery is running low, load carriage isn’t optimised or if it’s suffering from temperature extremes, vibration or other issues that can occur in a factory or warehouse environment. Since this data is collected in real time, the problem can be rectified before the robot breaks down, minimising the time it spends off the floor.

Maintenance time and costs can also be reduced by using IoT sensors to monitor robots remotely. This means robots don’t have to come back to base for routine maintenance; those routine checks would be completed constantly by the sensors and the robot would only need to be pulled off the floor if repairs or physical maintenance were required. Technical issues could be addressed using cloud-based applications to execute remote fixes, further reducing the need for physical intervention.

IoT sensors can also track how far the robots have travelled and load capacity transported. Careful analysis of this data may reveal ways to further optimise the robots for increased efficiency. The data can also be compared with manual labour to determine the return on investment provided by the robots.

With autonomous mobile robots taking their place as the future of manufacturing and warehousing, the question for manufacturers isn’t whether to invest in robots. Instead, the question is how to maximise the return on that investment so the business can be highly competitive. The answer is to leverage technologies including the IoT and 5G in smart, connected ways. Doing so will propel Australian manufacturers into Industry 4.0.

We can't be experts on everything, so it is important to seek out partners to achieve the...

Manufacturing in the new normal