The advance of the robots: helping manufacturers become more competitive

Industrial robot technology has come a long way from the simple machines of the early ’60s and today offers more flexibility and cost-effectiveness than ever before. Can Australian manufacturing capitalise on the benefits?

The first industrial robot to be used in manufacturing was installed at a General Motors plant in New Jersey in 1961. The Unimate robot had a single non-articulated arm and weighed more than 1.8 t. It was used for a single task - to move hot die-cast metal parts - and ran from a program on a metal drum.  It had a 227 kg maximum payload.

Industrial robots have evolved greatly from that time. The types of industrial robots commonly in use today can have as many as six degrees of freedom of movement and can be programmed for complex tasks by lead-though teaching. The largest robots can handle payloads of over 1300 kg and the smallest can be as light as 14 kg. New robots are just becoming available that can work collaboratively and safely in conjunction with a human worker. 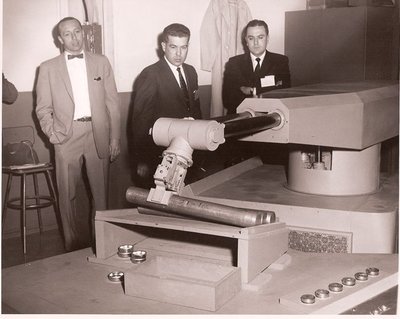 Figure 1: The first Unimate robot being prepared for shipment to GM.

With evolutionary progress in robot capabilities and lowering cost, the industrial robot market has seen a continuous upward trend. Like many other forms of investment, the rate of uptake of industrial robotics tends to follow economic trends: for example, the rate of investment in robotics was markedly down in 2009 due to the GFC, but in 2011 reached its greatest ever peak of around 166,028 units - an increase of over 38% from the previous year (see Figure 2). 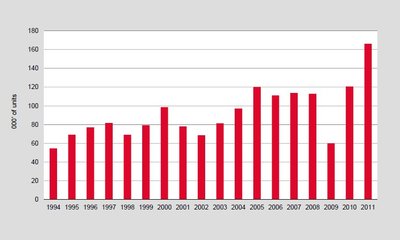 The automotive and electronics industries still remain the leaders in the use of industrial robotics worldwide and so the uptake of robotics is particularly marked in countries that have strong automotive and electronics industries. Worldwide, the manufacturing industry average industrial robot density is about 55 robots per 10,000 employees; but in Japan, South Korea and Germany, the density is much greater: between 347 and 261 per 10,000 employees. 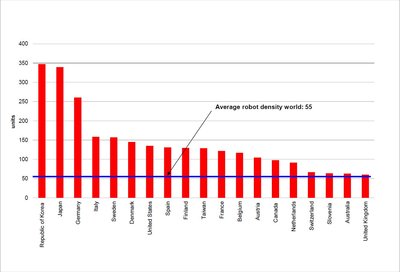 As it is in so many other areas, China is rising quickly in the uptake of industrial robots and is now the fastest growing market. In 2011, almost 22,600 robots were supplied to China, and it is expected to be the top robot market in the world by 2014. There is also a fledgling local robotics industry developing there. Other ASEAN countries are also increasing their investment in robotics, as well as the countries of Eastern Europe, India and Brazil.

In comparison with the rest of the world, Australia is sitting at the world average level of just over 55 per 10,000 employees and New Zealand is much lower at about 24. This is an interesting statistic for Australia, but not very surprising considering the heavy economic dependency on industries other than manufacturing, and the current decline in the automotive industry. 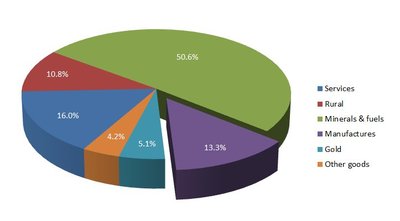 The Prime Minister’s Manufacturing Taskforce Report of the Non-Government Members (August 2012) stated that Australian manufacturing is largely made up of small firms:

“More than 500,000 Australians work for small and medium-sized manufacturing businesses. Around 50,000 manufacturing SMEs employ less than 200 people … This is a systemic constraint that makes it harder to penetrate global value chains within which much of manufacturing’s value is created. An industry structure featuring disproportionately small firms means fewer economies of scale and lower productivity.”3

With a preponderance of small manufacturers and therefore fewer economies of scale, it would seem natural that the ability for these manufacturers to invest in robotics and other automation may be more limited than in countries with larger domestic markets and correspondingly larger manufacturers. But as stated above, the cost of robotics is continuing to decrease and newer types of lightweight assistive robots and robotic ‘smart tools’ are becoming more available, so it may well be that Australian manufacturers with a view to future survival will need to be more technologically innovative and move to adopt these newer technologies.

The opening up of new consumer markets in Asia, South America and the Middle East is creating an increasing consumer demand for higher quality manufactured products at lower cost, so for developed nations with high standards of living and high labour costs, the need to find competitive advantage is paramount in order to sustain a manufacturing industry. According to the IFS:

“Increased productivity will be required to offset labour shortage and higher costs associated with demographic shift in many countries. Sustainability, eco-friendly production and energy-saving measures are gaining an increasing importance all over the world. New production processes have to be installed. Automation provides solutions to all these challenges and industrial robots are key components of automation.”4

The advantages of robotics and other automation are numerous, but traditionally they have been used to replace humans in dirty, dangerous and tedious work (such as in packaging and logistics, and in welding) or to produce quality work with accuracy and speed in large volume tedious assembly operations.

Normally, these types of applications are the domain of larger robots with fixed installations, performing a single task, and so the volume of work needs to be large enough to justify their expense. But improving technology and the decreasing cost of robots now provides an opportunity for helping to protect local manufacturing employment.

The potential afforded by robots and automation is that the total cost of local production can be kept equal to or lower than the cost of overseas manufacturing (when transport costs are taken into account) and provides other benefits such as local service and support for the products, actually increasing employment. Many people may be concerned with the potential loss of jobs brought about by replacing people with machines, but after all, a manufacturer that cannot compete with imported goods will go out of business and not employ anyone at all.

Staying competitive through a more innovative use of technology can keep a company’s doors open and perhaps even increase the number of available positions to support increased business needs.

This appears to have been recognised in the USA. Currently, the use of industrial robots in the USA is only about half that of Japan and Germany per capita, and over the 10 years from 2001, more than 2.1 million jobs were lost in the US manufacturing industry due to trade with China. The USA is now undergoing a phase of increasing its automation and robotics usage, reaching a new peak in investment in 2011. The US manufacturing industry appears to have recognised that if it wants to stay competitive and maintain employment during the ‘Asian century’, then it needs to increase investment in automation. It would seem that it is time for Australian manufacturing to take a similar approach.

Help from the next generation of robots

According to Alberto Elfes, Science Leader for Robotics at CSIRO, the newer generation of lightweight, assistive robots may provide new options for small to medium enterprises (SMEs) to improve their competitiveness:

Elfes says that there are three ways that lightweight robots can be integrated as assistants to workers:

These newer types of robots are the result in advances in materials technology, microelectronics, vision technology and mechatronics. In contrast to the well-established fixed, heavy, single-task robots we are familiar with:

Last year on ProcessOnline, we reported research sponsored by Boeing being conducted at MIT into how robotic assistants could be used to perform tasks that would hinder a human’s efficiency, with a focus on aircraft manufacturing.6

“It’s really hard to make robots do careful refinishing tasks that people do really well. But providing robotic assistants to do the non-value-added work can actually increase the productivity of the overall factory,” said Professor Julie Shah, leader of Interactive Robotics Group at MIT’s Computer Science and Artificial Intelligence Laboratory.

“If the robot can provide tools and materials so the person doesn’t have to walk over to pick up parts and walk back to the plane, you can significantly reduce the idle time of the person,” she says.

Another example of an assistive robot is ABB’s dual-arm concept robot, FRIDA, which was introduced as a concept in late 2012.7 It consists of a torso with integrated controller, two arms (with seven axes each) and grippers capable of handling a wide range of parts. The arms have a reach similar to that of a small adult and the weight of the robot is small enough to make it portable. 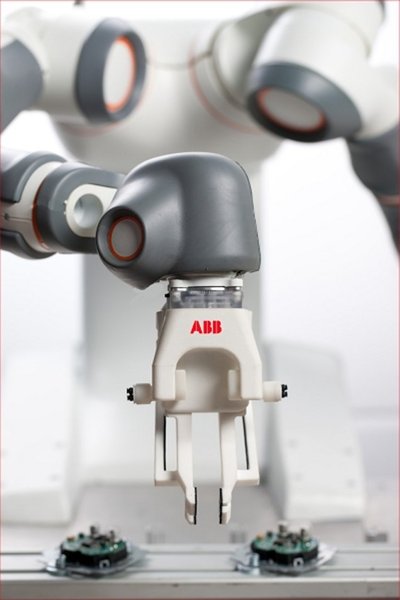 Such a robot can be mounted on a workbench or hung from a wall and is capable of operating in tight spaces and reaching components below its base and behind its back.

A light amid the doom and gloom?

Alberto Elfes feels there is some room for optimism among the doom and gloom that currently makes up the debate about Australian manufacturing. Perhaps he is right: if Australian businesses can find the funds to support greater use of modern and soon-to-be-here technology in automation and robotics, then perhaps there is a chance they can improve their competitiveness to meet the challenges of the Asian century, and help to maintain employment in the manufacturing industry. Change is inevitable - the difference between success and failure may well lie in the ability to embrace and manage change rather than fearing it and letting it happen on its own terms.