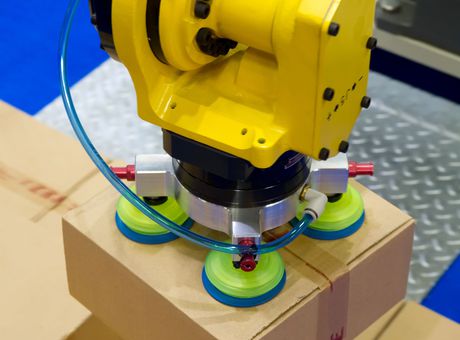 As industrial robot technology comes under more widespread use, and for a larger variety of applications, new approaches to safeguarding are necessary to reduce risk while maximising productivity.

Similar to vision technologies, technological advancements in robotics, reduced costs and increased ease of use has enabled widespread robotic adoption in industrial automation, including packaging applications. According to the International Federation of Robotics1, industrial robot sales worldwide increased by 29% in 2014 to 229,261 units, with Asia (including Australia and New Zealand) being by far the largest robot market with about 139,300 units sold, 41% higher than in 2013. China is now the highest consumer of robots with 25% of the total market.

Recently reported in a US-based business intelligence study, Trends in Robotics Market Assessment 2014, by The Association for Packaging and Processing Technologies (PMMI)2, more manufacturing companies are investing in robotic technology because of its impact on creating new jobs, greater safety and increased productivity.

Historically, robots were used for palletising and case packing. However, as technology advances, robots are expanding upstream to primary packaging functions, like pick-and-place operations and cartoning applications — and processing tasks, like cutting and coating. According to the 2014 study, respondents anticipate robotics will redefine manufacturing operations, due to:

These developments, as well as their more intuitive programming, have increased the use of robotics from only 20% in 2008 to 75% today. As manufacturers employ them in more complex applications, such as food and beverage packaging or pharmaceutical processing, it’s apparent that safety measures are vital to their continued adoption.

Robotics has changed the packaging industry’s safeguarding needs. A one-size-fits-all safety solution will no longer work for the next generation of packaging machines. A variety of devices should be considered, such as safety controllers, safety light curtains and safety laser scanners, to ensure robots are completely secure and to reduce disruption to production.

In the past, safeguarding scenarios in the packaging industry followed basic conditional ‘if X, then Y’ logic. Simple safety modules and guard monitoring controllers could meet the demands of most packaging operations. With the introduction of flexible robots — where a robot may have access to multiple lines or responsibilities to perform more than one task — safeguarding measures become more complex.

A single robot with the ability to function in multiple areas requires multiple safeguards, like e-stop buttons, light curtains and guard switches. In addition, these different functions need to be able to operate independently of one another and in conjunction with one another.

Safety controllers provide an integrated approach to risk reduction by managing the operation of multiple safety devices. For example, if a machine has an emergency stop button, two-hand control, safety light screens and interlocked guard switches, a safety controller can be used to manage all of these operations at a fraction of the cost of multiple safety modules or safety PLCs. Safety controllers can also provide several safety-related functions, such as muting or bypassing a safety light screen, external device monitoring (EDM), monitored manual reset functions and logical functions to create separate zones and conditional logic.

With robots and humans in such close working proximity, it is critical to keep everyone aware of safeguarding status. One fast-growing trend is to visually indicate safety status. Emergency stop push-buttons, gate interlocks and safety rope pulls are lighting up to communicate armed, actuated and stop conditions.

E-stop buttons with an illuminated base can glow yellow to indicate the machine is enabled or red to indicate a stop condition has been initiated. Status indication not only protects workers, but is also useful in identifying issues with the packaging line — especially when a series of buttons have been connected. The visual status indication will let operators know which button was pushed and help them quickly determine where the issue began and enable workers to quickly resolve issues and get the line running again.

When robots become integrated further upstream from the packaging line, it increases the likelihood that robots will work side by side with humans. To keep workers protected without introducing clumsy physical barriers, optical safeguarding technologies are an optimal safeguarding solution for robotic packaging applications.

When robots are performing multiple tasks or supporting multiple production lines, various entry points to the robotic cell are present. For example, a palletising robot cell will have access points where cases, new pallets and slip-sheets enter, and where full pallets exit the cell. Safety light curtains can efficiently safeguard several access points with minimal disruption. By selectively muting safety light curtains, pallets and product are allowed to flow in and out of the cell, while personnel are prevented from entering the hazardous area.

A safety laser scanner uses pulsed laser light to scan its surroundings and then compares the scanned information to its predefined zones. If the scanner detects an intrusion into the robot’s working area — such as a human — it sends a stop signal to the guarded machine.

Area laser scanners are versatile and non-intrusive safeguards. Unlike hard guards, such as fences or safety floor mats, the laser scanner works without physical barriers. Safety laser scanners are also an ideal solution for niche packaging applications where a safety light curtain does not cover the area efficiently.

As robotics enter the processing and primary packaging areas, they come in contact with food, pharmaceuticals and other regulated materials that require frequent washdowns. These robots need to be guarded by IP67- and IP69K-rated safeguarding devices. Washdown safety light curtains, e-stops and door interlocks are becoming more prevalent in the packaging industry.

When safeguarding a robotic palletiser, there are several safety functions involved. For example, the safety device status needs to be communicated to operators. Status monitoring ensures everything is running smoothly and no safety hazards exist.

To inspect robotic results, operators need to be able to access materials without compromising safety. Consider a robot engaged in a pick-and-place operation, where the robot places goods in a package as it moves along a conveyor and an operator then inspects the materials to ensure the package is correct.

By defining tiered safety zones and using area lasers scanners, manufacturers can safeguard their employees from robotic injury without shutting down production lines. When operators enter a pre-specified warning zone, a safety laser scanner recognises that activity and sends a signal to the robot to limit its movement and an operator signal that says, “You’re in the warning zone, proceed with caution.” If the operator continues into a protective field, the same laser scanner can identify that movement and signal a complete shutdown. This approach allows the operator to be in close proximity to the robot, without compromising their safety or shutting down the packaging line.

Safety mats can also fulfil this purpose, but they are costly and wear out quickly. Other machine safeguarding options include protective barriers and gates, which effectively safeguard an area, but limit the operator’s access.

As advancements in robotic technology continue to grow, packaging operations will require additional safeguarding methodologies. In order to achieve enhanced efficiency, streamline production and maximise the bottom line with robots, safety measures will be vital to protecting operations against unexpected shutdowns and to keep workers safe.