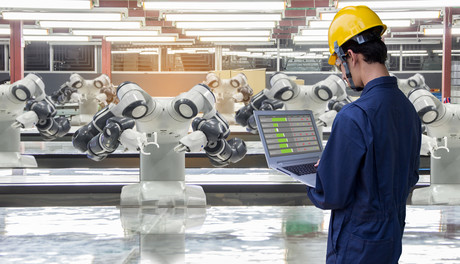 Innovations in robotics are facilitating close collaboration between humans and machines, so the safety of these interactions must be effectively planned.

Recent years have seen significant advancements in industrial automation applications in the fields of drive systems and object detection, paving the way for a new age of interaction between humans and machines.

With regard to functional safety and the associated standards (IEC 61508, IEC 62061, and ISO 13849-1/-2, for example), innovations in robotics delivering optimised functions are also facilitating close collaboration between humans and machines in the same workspace. Combining human abilities with those of robots in industrial environments creates production solutions that are characterised by better quality, lower costs, improved ergonomics and faster working cycles, to name but a few examples.

Taking the current status of the international standards that deal with the safety of industrial robots (ISO 10218-1/-2) and specifically the safety of robots for collaborative operation (ISO/TS 15066) as our starting point, this article will explain the guidelines contained in these standards which apply to the development of safe collaborative robot applications.

In industrial manufacturing, there is an increasing need for flexible machines that are able to work autonomously and can be adapted to changing production conditions quickly and efficiently. To protect persons against the dangers posed by their speed, movement, and force, robots usually work behind safety barriers. However, if close interaction between humans and machines is required, this effective standard method of physically separating the person at risk from the source of danger cannot be employed. For this reason, alternative methods must be applied to reduce risk.

The interaction of humans with active robots and devices that are similar to robots can be characterised based on two interaction parameters: space and time. If there is no common space and no common time in which the human being and the active robot move, the movements of the robot do not pose a risk and the situation is deemed “not interactive”. Situations in which humans and robots share a common space but at different times are deemed “cooperative”. The term “collaborative” is used to describe situations in which humans and robots are working in the same space at the same time (Table 1).

Even in industrial robot applications in which no human intervention is required during the production process, it will still be necessary for an operator to enter the robot’s workspace — for the purpose of maintenance work, for example. In applications of this type, the workspace must be fenced off and the access doors must be interlocked. The interlock must ensure that hazardous robot functions are shut down whenever an operator enters the hazardous area, and must be maintained as long as a person remains present inside the hazardous area or the access doors are opened (Figure 1).

Figure 1: Robot and human coexistence requires the use of safety barriers and interlocks.

The processes involving an operator loading and unloading robot cells are a very common application for industrial robots. In cooperative application scenarios like this, operator and robot complete the necessary stages of the process in the same workspace at different times. Here too, technical safety measures are required. Depending on how the loading and unloading system is set up, it may be appropriate to use optoelectronic protective devices such as safety light curtains or safety laser scanners (Figure 2).

In certain applications, it is necessary for humans and active robots to interact in the same workspace at the same time. In these scenarios, which we call collaborative, the force, speed and movement paths of the robot must be restricted. If they are available, inherent or additional safety measures — such as limiting torque through the performance of the drives or safety-related parts of the system controller — can be used to minimise risk. Force, speed and movement paths must also be monitored and controlled based on the actual degree of risk. This degree of risk is also dependent on the distance between human and robot (Figure 3).

Figure 3: Human and robot collaboration requires the use for force, speed and torque control with robot equipment specifically designed to operate in a collaborative mode.

This application calls for reliable sensors that are able to detect a human presence or determine the speed at which humans are moving towards the hazardous area and their distance from it. Essentially, these sensors have to be able to overcome the future challenges that are an inevitable consequence of the development of collaborative technologies.

The robot system described in Part 2 of ISO 10218 consists of an industrial robot and its end effector, as well as arbitrary machine parts, equipment, devices, external auxiliary motion axes and sensors to assist the robot in the completion of its tasks.

Secondly, the operating space of the robot must be positioned a minimum distance away from adjacent accessible areas in which there is a risk of crushing or jamming. If this is not possible, additional protective devices must be used.

Wherever possible, safe axis limiting must be deployed in order to restrict the number of free movements of the robot in the space and thus to reduce the risk of personal injury.

Technical specification ISO/TS 15066 states four collaborative operating modes which can be used either individually or in combination, depending on the requirement of the application concerned and the design of the robot system:

In collaborative applications, one or more of the methods listed above must be selected in order to ensure the safety of all persons who are exposed to the potential hazards. The method(s) selected will depend on the application at hand.

Current requirements to be met by the operation of collaborative robot systems include the use of a suitable safety-related control system which conforms to PL d according to ISO 13849-1.

A great variety of robot models are available on today’s market. They range from standard industrial robots to robots that have been designed specifically for collaborative operation (collaborative robots or “cobots”, as they are also known). Whenever robots are integrated into systems (with end effectors, etc), a risk assessment of the entire robot system (the full machine) must be carried out. The resulting measures derived to reduce risks shall then safeguard safe collaborative operation. This risk assessment must still be carried out even if the robot concerned has design features that reduce risk.

The inherent safety measures that are typically used on collaborative robots include:

In the future, humans and robots will work even more closely together in automation applications where great flexibility is required (such as in small batch production where levels of variability are high). Manual assembly operations are being replaced by human-robot collaboration, in which the abilities of human and machine are the ideal complement for one another. Subsequently, the ergonomics of workspaces in which high levels of productivity are required can be improved. The limitation of speed and force that is necessary for safety must be harmonised with productivity requirements.

The design principles in ISO/TS 15066 supplement the requirements already formulated in ISO 10218-1/-2 and create a basis for the design of collaborative robot applications.

The products and devices that are currently on the market are not able to fully meet all of the requirements expected of safe and unhindered human–robot collaboration today. The development of new sensor and robot technologies, along with intelligent control systems, is a fundamental requirement for future collaborative robot applications.

No two applications that are currently being solved with human–robot collaboration are the same. A dedicated risk assessment is vital, even if the robots that are being used have been designed specifically for interaction with human beings. The fact that robot manufacturers are integrating measures for inherently safe design into their products does not relieve system integrators of their obligation as machine manufacturers to analyse and reduce potential risks.

System manufacturers and integrators of robot systems have to perform thorough checks of the structural safety measures taken by robot manufacturers. They are also required to consider any hazards or risks that may remain and design the robot system according to the results of this risk assessment. As a result of the risk assessment, additional measures to reduce risk based on experience (eg, safety light curtains or safety laser scanners, etc) must be taken by the system manufacturer in order to achieve a collaborative application where all aspects have achieved acceptable residual risk.

Collaborative robot applications, a relatively new innovation, are designed to team up with a...

The uptake of 3D metal printing will have a profound impact on manufacturing in the future.

AGV navigation: what are the possibilities?

Various technologies are available on the market for bringing an automated guided vehicle (AGV)...