Researching robots that can sort recycling 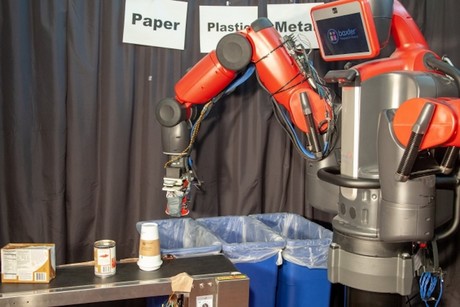 It is well known in Australia that our rubbish recycling industry is broken. Part of the problem has been that China has raised its standards for the cleanliness of recycled goods, making it difficult to accept recyclable materials from Australia. The same problem has occurred in the United States, meaning that some of the country’s single-stream recycling is now sent to landfills.

One of the technological problems which introduces high costs into the recycling process is the need to sort the rubbish. A key step in the process happens on fast-moving conveyor belts, where workers have to sort items into categories like paper, plastic and glass. Such jobs are dull, dirty and often unsafe.

Now a team led by researchers at MIT’s Computer Science and Artificial Intelligence Laboratory (CSAIL) has developed a robotic system that can detect if an object is paper, metal or plastic.

The team’s ‘RoCycle’ system includes a soft Teflon hand that uses tactile sensors on its fingertips to detect an object’s size and stiffness. Compatible with any robotic arm, RoCycle was found to be 85% accurate at detecting materials when stationary, and 63% accurate on an actual simulated conveyer belt. Its most common error was identifying paper-covered metal tins as paper, which the team says would be improved by adding more sensors along the contact surface.

“Our robot’s sensorised skin provides haptic feedback that allows it to differentiate between a wide range of objects, from the rigid to the squishy,” said MIT Professor Daniela Rus, senior author on a related paper that will be presented in April at the IEEE International Conference on Soft Robotics (RoboSoft) in Seoul, South Korea. “Computer vision alone will not be able to solve the problem of giving machines human-like perception, so being able to use tactile input is of vital importance.”

A collaboration with Yale University, RoCycle directly demonstrates the limits of sight-based sorting: it can reliably distinguish between two visually similar Starbucks cups, one made of paper and one made of plastic, which would give vision systems trouble.

Rus says that the project is part of her larger goal to reduce the back-end cost of recycling, in order to incentivise more cities and countries to create their own programs. Today recycling centres aren’t particularly automated; their main kinds of machinery include optical sorters that use different wavelength light to distinguish between plastics, magnetic sorters that separate out iron and steel products, and aluminium sorters that use eddy currents to remove non-magnetic metals.

“If a system like RoCycle could be deployed on a wide scale, we’d potentially be able to have the convenience of single-stream recycling with the lower contamination rates of multistream recycling,” said PhD student Lillian Chin, lead author on the new paper.

It’s surprisingly hard to develop machines that can distinguish between paper, plastic and metal, which shows how impressive a feat it is for humans. When we pick up an object, we can immediately recognise many of its qualities even with our eyes closed, like whether it’s large and stiff or small and soft. By feeling the object and understanding how that relates to the softness of our own fingertips, we are able to learn how to handle a wide range of objects without dropping or breaking them.

This kind of intuition is tough to program into robots. Traditional rigid robot hands have to know an object’s exact location and size to be able to calculate a precise motion path. Soft hands made of materials like rubber are much more flexible, but have a different problem: because they’re powered by fluidic forces, they have a balloon-like structure that can puncture quite easily.

Rus’s team used a motor-driven hand made of a relatively new material called ‘auxetics’. Most materials get narrower when pulled on, like a rubber band when you stretch it; auxetics, meanwhile, actually get wider. The MIT team took this concept and put a twist on it, quite literally: they created auxetics that, when cut, twist to either the left or right. Combining a ‘left-handed’ and ‘right-handed’ auxetic for each of the hand’s two large fingers makes them interlock and oppose each other’s rotation, enabling more dynamic movement. The team calls this ‘handed-shearing auxetics’, or HSA.

The team’s gripper first uses its strain sensor to estimate an object’s size, and then uses its two pressure sensors to measure the force needed to grasp an object. These metrics — along with calibration data on the size and stiffness of objects of different material types — are what gives the gripper a sense of what material the object is made from. Since the tactile sensors are also conductive, they can detect metal by how much it changes the electrical signal.

“In other words, we estimate the size and measure the pressure difference between the current closed hand and what a normal open hand should look like,” said Chin. “We use this pressure difference and size to classify the specific object based on information about different objects that we’ve already measured.”

RoCycle builds on a set of sensors that detect the radius of an object to within 30% accuracy, and tell the difference between hard and soft objects with 78% accuracy. The team’s hand is also almost completely puncture resistant: It was able to be scraped by a sharp lid and punctured by a needle more than 20 times, with minimal structural damage.

As a next step, the researchers plan to build out the system so that it can combine tactile data with actual video data from a robot’s cameras. This would allow the team to further improve its accuracy and potentially allow for even more nuanced differentiation between different kinds of materials.

Many companies have questions on how to ensure a safe autonomous mobile robot installation.

Collaborative robot applications, a relatively new innovation, are designed to team up with a...