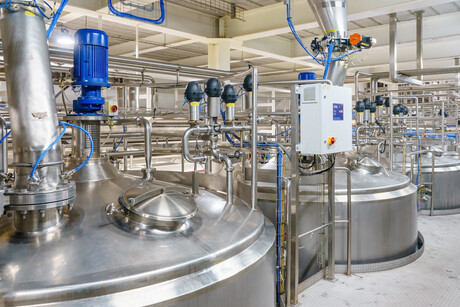 Many process businesses are starting to adopt modular automation to realise the productivity, efficiency and reliability benefits the technology can deliver.

Large-scale automation systems have been at the heart of production line control for decades. Now, driven by changes in consumer demands, an alternative plug-and-produce modular automation approach is emerging.

The pharmaceutical, fine chemicals, and food and beverage sectors are facing uncertain times and unprecedented challenges. The need to maintain uptime and reliability, synchronise supply with customer demand, maximise available capacity and deliver smaller batches in shorter lead times has resulted in the need for new technologies to keep pace. Energy and raw material prices are increasing, eroding profit margins for end products. Changes in regulatory requirements, such as in energy and water, are also impacting on production plants.

Meanwhile, customers and wholesalers are demanding higher quality, faster delivery and lower prices. This is squeezing margins and forcing industries to find new areas in which efficiency gains, however marginal, can be achieved. Furthermore, these industries are facing harsh global competition and changing market requirements such as more customised products, smaller batch sizes down to a batch size of one, and quick and simple integration of pre-packaged modular solutions.

In emerging markets, the production capacity of fine and specialty chemicals and the pharmaceutical industry is also growing, requiring the establishment of new plant and the associated automated systems to control them.

The automation systems controlling large-scale production are custom made with line-by-line source code executed by a master controller that governs sequencing, motion and I/O from the start to the end of the production line. These large automation systems have advantages, particularly for continuous production with highly predictable or constant demand cycles.

Decades of refinement and standardisation mean that these systems are typically optimised at the design stage for a particular plant layout, specific product types and a defined level of throughput. Monitoring and optimisation become easier as most setpoints typically remain the same, and engineers who are familiar with the process can more easily spot and rectify any processes operating outside of normal parameters. However, meeting the modern-day challenges described above requires a new approach.

Production needs to be faster and more agile to meet changing market demands. The pharmaceutical industry for example needs to focus on the individual needs of a patient, and this brings challenges in creating personalised medicines. As such, end products can no longer be commodities with thousands of tonnes being produced at a time, but rather batches of individualised products specific to the customer.

Meeting this demand for added flexibility calls for processes that are reliable, repeatable and error free, with the ability to adapt on the fly and quickly ramp production up or down to match sudden changes in demand. The market is moving faster than ever, and manufacturers must move with it, combining the agility of batch production with the speed of flow production, all while keeping efficiency high and costs low.

To develop customer-specific products and small batch series, there is a demand to develop flexible modular concepts that bring:

Modular automation brings an agility and flexibility to production never before seen. By acting like building blocks, the modules can be replicated and used to scale up or down in order meet rapidly changing capacity demands. By simply changing a few modules, a completely new product can be produced.

There are several benefits in process-encapsulated, reusable modules for both brownfield sites and flexible production plants.

For brownfield sites these include:

For flexible production plants, typical improvements can include:

In addition, customer-specific product adaptations can be rapidly and flexibly carried out by exchanging individual modules, bringing the cost of producing a batch size of one in line with that of mass-produced products. Overall, modular automation offers a more flexible and service-oriented plug-and-produce solution, as well as: 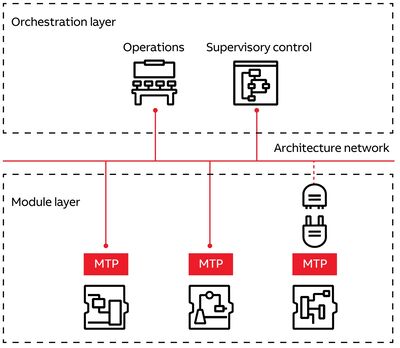 The starting point is the intelligent module that contains services orchestrated by the plant operator in the distributed control system (DCS) to reach the optimal production process. Supervisory control helps each module anticipate the actions of other modules. Modules are precisely defined with clear functionality that is easy to exchange or extend, equipped with specific application software and manufactured in small quantities and fully tested before delivery. The modules feature localised automation and can in some cases run fully autonomously.

Next is the module layer which houses several intelligent modules, often described as a process equipment assembly (PEA) — see Figure 2. A PEA is described by a vendor-neutral MTP file. Information is stored that is necessary for integration into the automation system and comprises an archive, HMI, process control, safety and security, alarm management and maintenance diagnosis.

Contained within the PEAs are controllers. Through a simple import of the MTP into the production plant’s DCS, these pre-automated PEAs can be easily added, arranged and adjusted according to production needs. Adhering to this standard should allow any module to plug into any automation system. Numbering up is easier, as entire pre-tested control subsystem programs can be connected with other controllers. This is much quicker than writing new code from scratch.

The MTP is generated using a module designer, which also defines the piping and instrumentation as well as module services. The final configuration can generate a target destination for automation systems as well as an MTP file for the integration into a process orchestration system. This module engineering needs only be done once and is reusable. 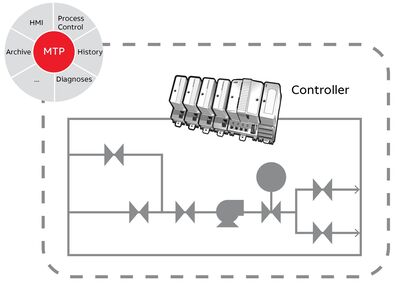 Figure 2: MTP is a new way of defining the description for process technology system modules in which information is stored that is necessary for integration into the automation system.

A promising future for modular-enabled automation

Due to challenges facing the pharmaceutical, fine chemical and food processing sectors, coupled with the impact of COVID-19 on production operations, modular automation is set to grow in the short to medium term. While high initial outlay may prove a challenge for some, many process businesses are starting to adopt modular automation to realise the productivity, efficiency and reliability benefits the technology can deliver.

We can't be experts on everything, so it is important to seek out partners to achieve the...