Mobile robotics: forklifts will never be the same again 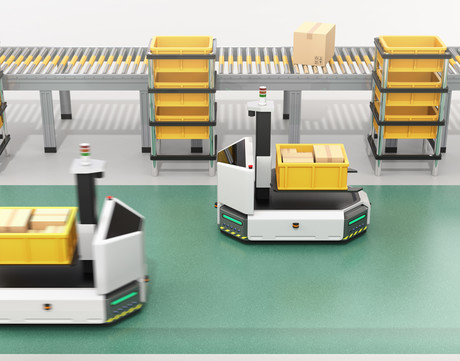 Robotic technology will also transfigure this industry, slowly but surely, enabling the rise of new types of autonomous mobile material handling units that will permeate into all aspects of our daily lives over the coming two decades. Autonomous cars are the subject of a lot of hype and media attention, yet despite being the largest prize, they will be among the last vehicle types to go fully autonomous. This is because their environment is poorly structured, and they are thus hard to autonomise. The current models of ownership and usage also provide a weak motivation for the general public to pay for autonomous driving, constricting adoption to high-end cars until long-term technology learning curves bring prices sufficiently down. A drastically different picture is found when one looks beyond passenger cars: all manner of commercial vehicles operate in a variety of semi-structured and controlled indoor and outdoor environments. In such cases, the technology barrier to autonomy is lower while a pricing system already exists that values the provision of driving services. Warehouses and factories are examples of such environments, and are thus an appealing target for autonomous mobility technology.

Indeed, automated guided vehicles (AGVs) have been around since the 1950s, essentially acting as long-range distributed conveyer systems. This technology itself has matured: sales have diversified beyond just automotive factories and assembly lines, and the onus has shifted onto suppliers to spend effort in developing customer specifications and price pressures are increasingly intense. The latter is critical in this highly fragmented business landscape where suppliers offer comparable levels of competency. We find that it is likely that companies with partnerships with major forklift players will command a competitive advantage via the removal of margin stacking. This partially explains the recent activities by forklift players to acquire, or partner with, AGV companies. AGVs, and in recent years AGCs (carts), are enjoying healthy, albeit slow, growth. Yet, the industry is on shaky ground. Indeed, it is predicted that AGVs will face a slow journey towards technology obsolescence in the next 15 years. The current positive growth rates give a false sense of long-term security, and companies will increasingly face an adapt-or-die situation.

The challenge to the incumbent AGV technology comes from the next generation of navigational autonomy technology. Current AGV systems are rigid and require infrastructure modifications such as the placement of reference points or lines to guide the vehicles. These systems safely work across all payload ranges. They are, however, difficult to tweak, require advanced full system planning and involve a large on-site installation time, which represents a major manpower overhead. Fully autonomous systems will do away with such shortcomings. They offer flexibility in that routes can be changed via a software interface and updated via the cloud, and benefit from short installation time involving the CAD model of the facility or the walking around of one robot for ‘training’ it.

Current models all have limited payloads, partially because safety is not yet fully trusted. The robots and software are also still somewhat expensive, limiting applicability to less cost-sensitive sectors. Human workers may also put up a resistance to wide-scale adoption, seeing them as more of a threat. None of these are, however, a showstopper.

The transition towards infrastructure-free and independent autonomous navigation technology will take place. The payloads will increasingly rise to cover the full spectrum, and hardware costs will fall thanks to major investment in other autonomous driving industries. In fact, it is predicted that very soon costs across the board will fall below the level of AGVs since they save on installation and infrastructure modification costs. This story can be contextualised as part of a slow change in the navigation technology for AGVs moving from low-cost wire or magnetic tape guidance to laser localisation and now to natural feature recognition and SLAM.

This technology evolution, however, increasingly necessitates a transformation in the nature of the companies towards software and algorithm plays. Indeed, it is the importance of software (autonomy algorithms, fleet/inventory management systems, user interfaces) that explains why California has emerged as a hotspot for investment and startups in this arena. Luckily, many of the major changes will arrive in small evolutionary steps, giving the wise incumbents the chance to go with the flow and exploit their customer relationship and application know-how to stay in the warehouse/factory mobility automation game. They will, however, have to fundamentally alter their engineering skillset.

Independent autonomous navigation enables the mobile material handling vehicle industry (forklifts, tugs, etc.) to generate far more revenue than would have been the case without autonomous mobility. Indeed, vehicle suppliers will increasingly capture the value that currently goes to the wage bill spent on human-provided driving services. As quantitatively demonstrated in IDTechEx’s 20-year forecasts (Mobile Robots and Drones in Material Handling and Logistics 2018–2038), this will represent a major sum despite the fact that our projected figures for future autonomous mobility hardware costs suggest a long-term devaluation of driving services in high-wage regions. Our technology roadmaps also suggest that autonomous forklifts will soon become a major feature of the industry, despite them not even being mentioned in major forklift companies’ investor presentations today. Indeed, our forecast model suggests that nearly 70% of all forklifts sold in 2038 will be autonomous.

This transformation will, of course, not take place overnight. Indeed, the timescales of adoption will be long, explaining why in our study we have chosen to build 20-year models where different phases of growth are clearly marked and underlying assumptions and conditions are explained. In our forecast model for autonomous mobile industrial materials handling vehicles, we project that annual sales of autonomous versions will steadily rise but remain a tiny share of the global addressable market until around 2023. We will then enter the rapid growth phase soon after, causing a transformation of the industry and dramatically raising adoption levels.

The forklift industry is open to innovation — it embraced electric powertrains in the past, particularly for indoor environments in Europe. It will also adopt autonomous navigation. In fact, merger and acquisition between forklift and automation (also AGV) companies is already a trend. In the past few years, Toyota acquired Tailift (2014); KION acquired automation specialists Egemin and Dematic; and Mitsubishi Nichiyu took over UniCarriers (2016). Toyota owns the Raymond, Toyota, BT and CESAB brands, while KION Group operates the Linde, STILL, Baoli, Fenwick, DM and Voltas brands.

Beyond the confines of factories and warehouses

New types of mobile robots are emerging. Here, the rise of navigational autonomy will enable mobile material handling units (robots) to enter new walks of life. This is because mobile robots will become increasingly able and authorised to share spaces with humans, intelligently navigating their way and avoiding objects. They will therefore enter new spaces to ferry items around, diffusing from highly controlled and structured environments towards increasingly less structured ones.

These technologies will share a common technology platform with other autonomous material handling units, although each application will need to be adapted to each environment, and this ability to customise (or initiate) will remain a source of value for start-ups and SMEs for years to come. Here, currently, the hardware is often an integral part of the software, which is customised to each environment. This prevents commoditisation in the short to medium term, but will not manage to prevent it in the long term. Consequently, such mobile robotic companies will inevitably have to seek new sources of revenue. Therefore, a long-term rethinking of business models will be required with emphasis shifting from the robot onto data-based or delivery services. Our contacts tell us that this rethinking, too, has already begun.