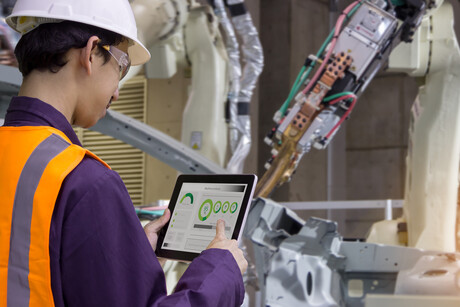 In the Fourth Industrial Revolution, the ability to see the potential of digitalisation and to separate the hype from reality will make the difference between success and failure.

The advent of a Fourth Industrial Revolution was first announced at the Hannover Messe in 2011. During that exhibition, the term ‘Industrie 4.0’ was coined by the German Chancellor Angela Merkel, to describe this revolution to come.

The first Industrial Revolution brought mechanisation to manufacturing, the second one electricity. In the 1970s, a third revolution further enhanced production processes with the introduction of information technology. The first three revolutions were all identified in the aftermath. Now, for the first time, Industry 4.0 describes a revolution before it happens, creating stimulus for its advent, rather than describing it afterwards.

Below is an excerpt from the final report of the Industry 4.0 working group:

“[…]the introduction of the Internet of Things and Services into the manufacturing environment is ushering in a fourth industrial revolution. In the future, businesses will establish global networks that incorporate their machinery, warehousing systems and production facilities in the shape of Cyber-Physical Systems (CPS). In the manufacturing environment, these Cyber-Physical Systems comprise smart machines, storage systems and production facilities capable of autonomously exchanging information, triggering actions and controlling each other independently. This facilitates fundamental improvements to the industrial processes involved in manufacturing, engineering, material usage and supply chain and life cycle management. The smart factories that are already beginning to appear employ a completely new approach to production. Smart products are uniquely identifiable, may be located at all times and know their own history, current status and alternative routes to achieving their target state. The embedded manufacturing systems are vertically networked with business processes within factories and enterprises and horizontally connected to dispersed value networks that can be managed in real time – from the moment an order is placed right through to outbound logistics.”

Industry 4.0 will help factories to answer individual customer requirements, it will address the growing need for increased productivity and efficiency, but it will also address social needs: supporting interactive collaboration between humans and machines.

Digitalisation will impact the entire business environment. We see many changes already on the consumer side, where smartphones and apps have disrupted long-established business ecosystems with unexpected value propositions and cost-saving potential. However, even in fully controlled industry ecosystems, Industry 4.0 is not a standalone phenomenon. The process of digitalisation has already enabled several successful usage-driven models outside Europe, such as the jet engine business of GE.

Several associations and initiatives around the world are focused on applied digitalisation. Among the most relevant we can mention:

In Germany, Industrie 4.0 is driven by strong governmental support and supported by the main industrial associations (ZVEI, VDMA and BITKOM) as well as academia (represented by the Fraunhofer society). Other initiatives take a different approach to digitalisation and have a different setup with regards to founding and governmental push (Figure 1). 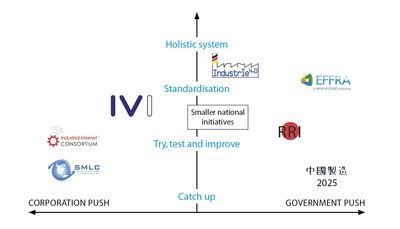 It is important to understand the influencing factors for each initiative, in order to be able to judge their impact and future direction.

This article mainly refers to the Industry 4.0 approach to digitalisation. However, the principles presented here are applicable to digitalisation in general. Priorities and speed of implementation may differ from initiative to initiative.

The Fourth Industrial Revolution and the Internet of Things and Services

The first Industrial Revolution was marked by the introduction of mechanically supported processes in industry. In the second revolution, electrical power enhanced the productivity of our factories. In the 1970s the development of IT and factory automation boosted industry into a third revolution.

The Fourth Industrial Revolution is characterised by a convergence of the physical world and the virtual one (cyberspace) in the form of CPS (cyber-physical systems).

This latest revolution has the potential for a more disruptive change than any previous industrial revolution. The pressure that this revolution brings to data processing requirements is making the traditional Moore’s law inadequate to keep pace with current and future requirements, forcing the definition of new roadmaps for the evolution of processing power. The extent of this need can be easily imagined just by looking at the exponential growth of connected things.

This development forces all members of a supply chain, serving a particular segment, to consider how far they need to cooperate with partners, as well to consider how scalable business platforms can be created and leveraged.

Whenever talking of connected objects, it is important to understand that the Internet of Things (IoT) also includes physical devices that are not directly connected to the web or do not even carry any electronic intelligence. An object that simply makes its virtual representation available to an IT system can be considered an Industry 4.0 component.

As an example, we can consider a simple relay produced in a fully traced production process. If you associate this relay with a unique serial number and store it in a QR code, you can use this code to identify the relay. Scanning this code will show you when it was produced, where, how and on what route it was shipped to the customer (Figure 2).

Figure 2: A physical device without digital connectivity can still be an Industry 4.0 component.

This relay can be used in a fully digitalised production line, where its code is scanned when it is installed in the cabinet. Age, specification, life expectancy and supply route for replacement then become immediately available in the system.

In addition, the control system can record the operations and the load applied to the contacts to predict the remaining life of the relay at all times. When this prediction indicates an increased probability of failure, the system can automatically order a replacement. This replacement can be installed in the next maintenance cycle of the machine, avoiding unexpected downtime and production loss.

We can consider the above relay combined with its digital virtual representation as an example of a simple cyber-physical system (CPS) or the most simple type of an ‘Industrie 4.0 component’1. Within Industry 4.0 terminology, this virtual representation is better known as the administration shell of the corresponding physical device (Industrie 4.0 component).

In a more complex reality, simple components like the one described above can be nested within more complex high-level components (for example, a machine or a whole production line).

If we now look at machines, lines or plants, we can recognise that we have a hierarchy of nested devices that build the system. The Industrie 4.0 component concept, together with its administration shell, has been defined to allow an easy and logical scalability of CPS (Figure 3). 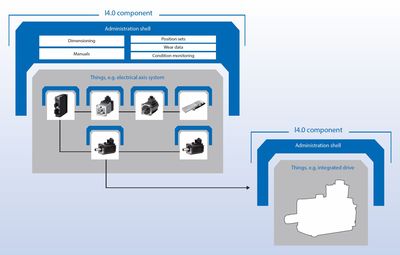 The example of a simple CPS can be useful to also explain and clarify the real value of behind the IoT. The power of digitalisation is not in the data itself, in the connectivity or in the processing capabilities of a device. The real value of the IoT comes by using these cyber elements in order to make an object, a machine or a plant perform better.

Within a CPS, the combination of cyber and physical elements can transform a product into a ‘smart product’. A smart product is a product that can perform a much more useful function with the empowerment provided by the IoT.

The way forward to digitalisation

In 2014 PricewaterhouseCoopers released, in cooperation with VDMA and several industrial partners, a survey about the challenges and opportunities of the Industrial Internet2. This study clearly shows the extent of the commitment required by industrial organisations to properly implement the digital transformation. It also stresses how future customer satisfaction and related corporate success are closely related to this transformation process.

This requires an incremental and structured approach to digitalisation. Manufacturing strategy and company infrastructure must be transformed carefully and require a well-thought-out plan: a digitalisation strategy.

To conduct the transformation, several changes in the business environment must happen, especially to ensure efficient integration of relevant business partners in the horizontal integrated ecosystem. A network of reliable partners is a crucial element to succeed in this challenge.

A proper digitalisation strategy must define all the key improvement areas and must set priority over the main value-added processes such as:

The Platform Industrie 4.0 has recently reconfirmed the research roadmap to be followed in order to achieve a full Industry 4.0 implementation.

This roadmap shows that a fully digitalised enterprise will not become reality before the 2030s, even if many technologies are already available to create and utilise digitalised production. A successful company cannot just wait until all the technology will be available, but it would also be wrong to surrender to the hype and get disappointed by too high expectations that cannot be matched.

The best approach involves starting the use of available technology to address the most value-added digital applications and to gradually move on through the digital journey.

Machine automation at the heart of digitalisation

The Reference Architecture Model Industrie 4.0 (RAMI4.0, Figure 4) was created in 2015 in order to cover all aspects of development and to define a model that embraces the entire enterprise, down to the level of a single device1. 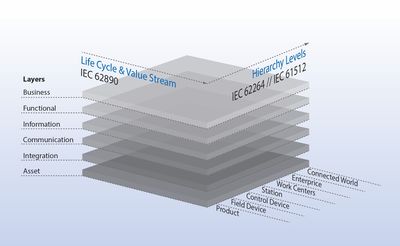 This model classifies all aspects of a digitalised production ecosystem. It consists of three axes addressing the most relevant dimensions:

Machines are considered to be the core of production and, therefore, systems that enable machines to perform are the core enablers for the usage of smart data in production.

Another key factor in a digitalised production environment is a seamless vertical communication of sensor and machine data. Just as important as the vertical integration is the easy realisation of horizontal plant-wide integration, also supported by data communication technology, such as SQL.

The Fourth Industrial Revolution is just starting. The scalability of digital technology combined with the collective intelligence using emerging metadata sources promises a huge disruptive potential. But we have a massive hype at present and the expectation to get dramatic results in a short time may not be fulfilled.

The capability to see the real potential of digitalisation and the ability to separate the hype from the real enablers will make the difference between success and failure in any digital venture. But ultimately, the result will be systems that are:

Business leaders on the path to sustainable communities

No solvent, no effluent: a new approach to water treatment