From mass production to mass customisation 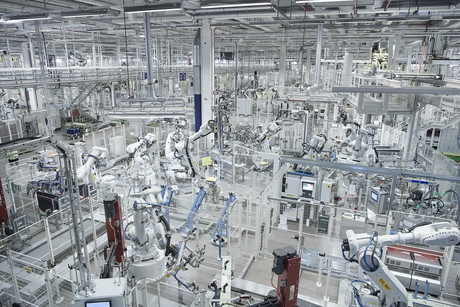 The Factory of the Future is not just better than the factory of the past — it’s different. Using digitalisation and connectivity, the new factory will mass-produce individualised products.

The factory of the past was founded on economies of scale. By using industrial methods to produce large quantities of the same items over a long period of time, costs should be reduced and margins improved. Ever since the start of industrialisation, the key has been these economies of scale. Capital costs were fixed and high, while variable costs were low. Now the ‘new normal’ in many industries is high mix and low volume instead of high volume and low mix, with much shorter production cycles.

When Richard Arkwright built his factory in England at the end of the 18th century, he used the power of water to spin cotton in a way that had never been done before. The factory eventually included several cotton mills operating 24 hours a day, employing 1000 workers on two 12-hour shifts. You can still visit Derwent Valley Mills in Derbyshire, which is now a World Heritage Site, and you can marvel at the early days of the factory system that has been the mainstay of our industrial activities ever since: making large volumes of the same product for a long time.

Today’s consumers of everything from clothing to personal electronics to foods, however, want more customised goods and ‘the latest thing’. This means automation needs to be flexible to accommodate these new buying habits, with a variety of new products and packaging and much shorter product life cycles — for some goods, just a matter of months.

The fact that manufacturing has to take into account that people want to buy things that are more diverse means that the old manufacturing systems are not flexible enough to keep up. The new factory offers ‘mass customisation’, where every item is individualised but is produced using mass-production methods.

The challenge of customisation

The change to customised manufacturing is a big challenge. The increasing mix of products means people need to frequently work closer with robots in intermittent ways that are sporadic and less predictable — bringing them new materials, changing programs and inspecting new processes. But many industrial robots today need to remain behind cages to keep workers safe, so this means the robots often have to be shut off each time a person comes near. It simply is not productive to shut down a process every time a person comes close to a robot or other machine. Today’s low-volume/high-mix production means manufacturers need both productivity and safety.

Many of the world’s 1.7 million operating industrial robots are also not connected to the internet, which deprives factories of very useful intelligence that can improve performance and help human operators make better decisions. It has been estimated that only some 5% of industrial robots are connected in some way, which represents a huge potential for improvement.

Nowadays, the availability and connectivity of low-cost sensors has changed the amount of information available in digital form. The information can be used, for example, for predictive maintenance, to respond to outside influences like changing order patterns, or to avoid accidents.

Accommodating all this change brings challenges. Low-volume/high-mix means more costly engineering time and shopfloor disruptions to ramp up new production. Shorter product cycles are increasing the cost of even an hour’s unplanned downtime. Getting production closer to customers may mean moving production somewhere where there’s a shortage of skilled staff.

It’s up to the Factory of the Future to relieve these pains, and the tools are already there — for example, virtual commissioning can allow new products to be launched faster, with testing and troubleshooting carried out before the product is installed. Cloud-based systems can bring together the operating data of all the machines of a particular type so that they can learn from one another and operators can learn from them what the warning signs for machine failure might be.

Shopfloor disruption can be minimised by machines that learn easily, for example with ‘lead-through programming’ where robot actions are simply recorded by moving the arm to where it should go and saving the operation. This has been a huge simplification of a process that used to require lines of computer code written by a specialist, and it can reduce programming from many hours to minutes.

The Factory of the Future will have various kinds of robots with different levels of collaboration. In some cases these will include traditional industrial robots whose speed and position are controlled by smart software that allows people to work in close proximity without stopping production. In other cases it will mean people and robots directly sharing the same task — for example, productively assembling small electronics with many different customer options.

The ability of collaborative robots to work safely without cages also means that manufacturers are free to flexibly design their production flow to customers’ needs, rather than being restrained by fixed barriers. For instance, a collaborative robot could spend its morning ‘shift’ gluing USB flash drives together, and then use its afternoon to placed finished products into a laser engraving station.

All of these robots will be linked to central control systems for maintenance, but also to enterprise-level ordering, acquisition and dispatching systems so that a big order will automatically ensure that extra supplies are in place and that there are enough trucks scheduled to carry the product away. The system might even know that a new advertising campaign is expected to lead to higher demand next week.

Where are the workers?

Another factor influencing the factory of the future is generational changes in labour markets. All around the world it is getting more and more difficult to find people who want to do the ‘4D’ jobs — that is, work which is dirty, dusty, dangerous or delicate. It is even getting hard to find people to do skilled jobs in factories. An emphasis on university education instead of apprenticeships has led to a shortage of good industrial workers, even in a country like Germany, which is famed for its vocational training. But the shortage of workers is a convincing argument in favour of increased digital automation.

Today’s digital generation grew up with the internet at their fingertips — they want rewarding mental challenges, not demanding physical ones. And the increasing ease of using robots means that tomorrow’s manufacturing workers won’t need advanced degrees. But the nature of work will certainly change — one estimate suggests that 65% of today’s primary school entrants will be doing jobs that don’t even exist today. The Factory of the Future will lead to the labour of the future, and who knows what that will look like!

The next development will be the maturing of machine learning, which is an artificial intelligence application based largely on pattern recognition. Today robots are limited to doing exactly what they are programmed to do, and they are not able to react to changes in their environment or tasks the way a person can. The ultimate goal is to have robots that are easier to use and perform better with less human intervention.

This is already evidenced by the shift from programming robots to teaching them with lead-through programming. In the future, robots will be able to learn a new task, such as picking up unfamiliar objects, from other robots. Machine learning may one day lead to self-optimising robots as well. What if all the robots that perform the same task around the world could ‘huddle’ at the end of their shift like people and analyse what went well and what could be improved, so they perform even better the next day?

It is difficult to imagine what Richard Arkwright would think of this Factory of the Future — mass customisation, people working side by side with robots, and even connected robots that can learn and share useful information. But what is clear is that manufacturers who invest in these solutions for flexibility, efficiency and performance today are likely to be a very big part of tomorrow.

This article is based on a piece previously published in ABB Robotics.

A guide to collaborative robot safety

Ball screw or lead screw? Choosing the right one for the application

When determining if an application calls for a lead or ball screw, the decision should be guided...

From robotics to dentistry and from food to metals, 3D printing is exponentially maturing.

How can a smartphone detect gluten in food?

Boosting safety for a macadamia processor