Demystifying the fears around collaborative robots 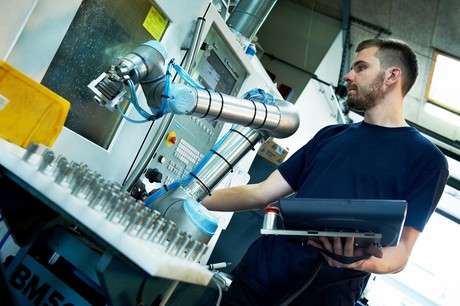 High labour costs mean that to be competitive in local markets, ANZ manufacturers need to apply innovative technologies to streamline their production processes and deliver products to market more efficiently, while maintaining the highest level of quality. Applying automation and computerisation to manufacturing processes is key to achieving just that. With the ability to perform tasks accurately and efficiently alongside humans, collaborative robots — cobots — are helping to optimise manufacturing operations.

As cobots modernise the factory floor, there’s a misconception that robotic operations will replace people as the world’s primary workforce. However, less than 10% of jobs can be fully automated, therefore limiting the number of human jobs cobots are likely to replace, according to findings from the OECD1. Cobots are also easily programmed, cost effective and can be deployed for operations of any scale.

Automation isn’t about reducing human staff: it’s about integrating new technologies that will support and work alongside existing staff. 52% of CEOs plan on increasing headcount despite increases in automation. This is testament to the fact that cobots don’t replace jobs, they create better jobs. They relieve workers from strenuous and repetitive tasks so workers can take on new roles. Such was the case for Trelleborg. More machines and robots have meant more orders and hiring of 50 new employees at the sealing solutions company. With flexible, lightweight robots Trelleborg has optimised production with orders ranging anywhere between a single unit to several million. Remember that human dexterity, critical thinking, decision-making and creativity will never be replaced by machines.

Direct interaction between humans and cobots in the workplace is changing manufacturing. With this comes a perception that cobots could harm or frustrate humans while carrying out tasks that have traditionally been the domain of people. While most automation solutions require safety fencing so the robot can operate in a closed-off area away from workers, this isn’t the case with cobots. They don’t need to be caged behind protective fencing, subject to risk assessment. Cobots operate in a realm where human modes of communication and safety are paramount. For this reason, cobots have built-in safety functions that permit them to work safely and side by side with people. Cobots provide ease of use and are able to work closely alongside humans when compared to traditional robotic solutions.

It’s a hassle to implement cobots

Cobots don’t require specialised knowledge to implement and operate. They’re easily programmed or redeployed and require minimal maintenance. Human technicians can easily and quickly learn how to program and operate a cobot — it’s as easy as operating an iPad. This saves a business a great deal of time in the implementation phase and in repurposing the cobots to carry out different tasks. The average set-up time for a cobot can be as short as 0.5 days. In addition, cobot arms can weigh as little as 11 kg. Being compact and lightweight, there’s no need to change production layout when switching the cobot between tasks.

Regardless of the scale of output, cobots can be deployed for simple processes that are repetitive, manual or potentially strenuous for workers. A cobot also enables manufacturing companies to combine functions. Talbot Technologies is a good example. The plastic manufacturing company has combined tasks that occurred off-machine and on-machine and others which happen either prior to or post production, helping to streamline the production process.

Cobots can deliver a cost reduction through improvements in quality. Cobots improve the consistency of quality and of flow wherever they are deployed. This allows a company to competitively manufacture products for the global market. There’s no variation in output, which means no repeatability through error. The average ROI period is 12 months from implementation, which provides cost-saving benefits that can be redeployed back into strategic business initiatives. The installation of a cobot requires minimal investment as they don’t require major infrastructure changes. They can be redeployed to different functions in the production line, and used around the clock.

Debunking the risks surrounding cobots makes it clear that the benefits far outweigh any fears. It’s time to acknowledge the fact that cobots function as co-workers rather than threats, often creating better jobs than they replace, as well as improving productivity and increasing competitiveness.

*Shermine Gotfredsen is General Manager, Southeast Asia & Oceania for Universal Robots (UR). She joined UR in 2011 to spearhead the company’s market entry and operations in Asia Pacific. Having previously lived in Denmark, she now lives in Singapore with her husband and two children.