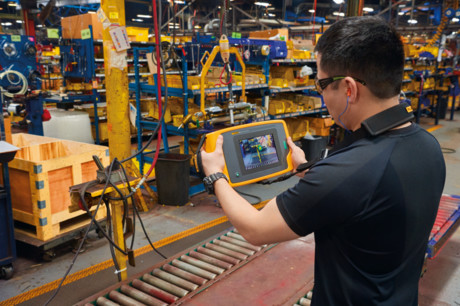 Genie is a US company that designs and builds innovative vertical work platforms and material lifts to make working at heights safer and more productive in a whole range of industries.

The business’s plant in Redmond, Washington builds material lifts and uses between 1,800 and 2,600 CFM of compressed air each day. That volume of compressed air runs up to 200 torque tools per line and process equipment responsible for moving large sheets of half inch steel and positioning of parts. If the tools don’t have enough compressed air pressure to function properly, the results could be costly.

The high cost of low pressure

“If we were to lose pressure on the system we use to vacuum sheets up and transfer them to the laser to be cut, we wouldn’t be able to pick up or move the sheets,” explained Josh Stockert, Genie Maintenance Supervisor, Terex AWP. “If one sheet misses a transfer, we’ve lost nearly 20 sheets of cut parts, which could add up to 200,000 parts. If the pressure is too low on our torque tools, we could wind up with mistorqued units.”

The more leaks there are, the higher the demand for compressed air. Increased demand for air pressure raises the risk of not being able to supply an adequate amount to all the tools and process equipment that need it.

Compressed air leaks also increase energy costs. According to the US Department of Energy Office of Industrial Technologies, a single 3 mm leak in a compressed air line can cost upwards of US$2,500 (~AU$3,600) a year.

To reduce the risks of low air pressure, Genie is vigilant about finding and fixing air leaks. Some leaks occur in hoses and fittings high up in the rafters; others show up on the torque tools on the shop floor. In the past, during monthly preventive maintenance (PM) operations, Genie dedicated one or two maintenance technicians to hunt for air leaks. The technicians first sprayed joints and hoses with a soap and water mixture to reveal bubbles that indicate leaks. Then they fixed the leaks and retested with soapy water.

“It’s very labour intensive,” said Stockert. “It might take 30 to 45 minutes to find one leak in the rafters, and then come back down to get material to fix it, go back up and fix the leak, and verify with soap and water that the leak was fixed.”

The soap and water method works, but slowly; and it requires a lot of clean-up afterward to prevent slipping hazards. Genie also tried using traditional ultrasonic leak detectors, but found they only detect very high frequency leaks and air leaks can occur at many frequency ranges.

So, when Fluke offered the company a chance to test its Fluke ii900 Sonic Industrial Imager, Genie immediately accepted. The ii900 includes an array of tiny super-sensitive microphones that detect sounds in both the human hearing range (2 to 20,000 Hz), and the ultrasonic range (20 kHz and higher). It allows the user to actually see sound. 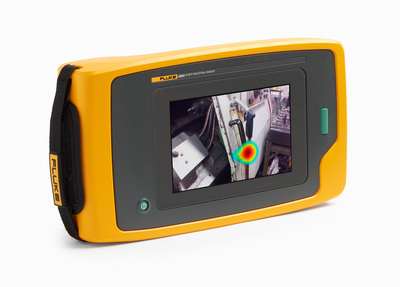 The ii900 applies proprietary algorithms to determine the location of the leak. The results produce a colour SoundMap image superimposed over a visible light image of the equipment to show the exact leak location. The user views the results on a 7″ LCD screen as a still image or a real time video.

“Being able to visualise where the problem is and how big it is adds another dimension,” said Stockert. “You can identify which threads, fitting, or hose is affected. Being able to pinpoint where the leak is coming from on that image is extremely exciting. You can see different angles and determine ‘Yep it’s these threads versus that hose that feeds this fitting.’”

Testing during production without disrupting operations

The ability to visually scan large areas from up to 50 m away with the ii900 has expedited leak detection at Genie and significantly reduced the hours of labour spent on that task. “Rather than taking at least an hour…it takes me all of 30 seconds to a minute to find an air leak with the ii900 camera. Some days we can find and repair 30 or 40 leaks in just a couple hours,” said Stockert. “Now, we can stand on the sideline and scan the airline overhead, while carts and people are moving underneath. We’re not affecting their work, but we can tag the leak and then move a lift to that spot during lunch and fix it rather than having to wait for a weekend PM shift.”

Initially, the primary objective for Genie when testing the Fluke ii900 Sonic Industrial Imager was to save energy.

After the initial air leak inspections and corrections, Stockert saw a 25.7% recovery in their compressed air capacity. “We were near the top end of what our compressor system can put out,” he said. “By correcting the leaks found using the ii900, one of our four compressors is nearly idle much of the time.” The reduction in compressor usage translates to an estimated US$48,754 (~AU$70,860) in annual electrical energy savings. However, Stockert believes that there is an additional benefit derived from not having to add more compressor capacity.

Within the chemical, pharmaceutical and process technology industry, system availability is...

Infrared temperature sensors can be used to detect people with a symptom such as fever and...

Today's thermal imagers are rugged, easy to use, and much more affordable than even just a...