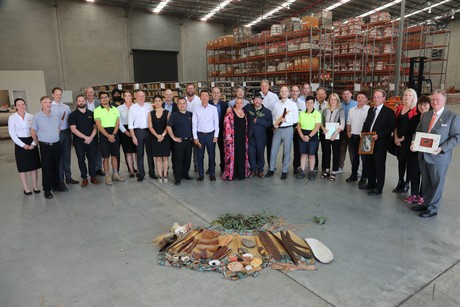 LAPP is expanding in Australia following the visit of its founding family to celebrate the success of the establishment of LAPP Australia.

LAPP Australia — which launched its headquarters in at Eastern Creek, Sydney, in 2018 — will expand its operations with additional account managers, for Western Australia and NSW, new product and technical support appointments, and many more products available.

It will also distribute via its e-shop technologies by Wago and Tosibox, said LAPP Australia General Manager Simon Pullinger.

Pullinger said the expanded availability of 18,000 products online — with live real-time stock checking on the local and German HQ warehouses — gives customers greater access to products and rapid lead times for better planning of future-focused automation initiatives including those taking place locally as a result of Industry 4.0 digital integration.

The LAPP Sydney Opera House gala function for customers was addressed by Andreas Lapp, who announced that the company would provide $50,000 to bushfire relief, to help parts of NSW that are struggling with the worst bushfire seasons on record. Andreas Lapp’s nephews Matthias Lapp (Chief Executive Officer) and Alexander Lapp (Global Manager Digital & eBusiness) also attended the event and were optimistic about Australian industry and further growth in emerging markets.

LAPP Australia’s expanding ranges will be exhibited at the Advanced Manufacturing Expo in Sydney, 13–15 May, where the company will present a one-stop shop for systems that comply with the leading Australian, European and American compliance and quality standards.

Treotham has announced a partnership with Netherlands company TKF, to provide its large range of...

AMS Instrumentation & Calibration has announced the venue for the 2020 Beamex Users Group (BUG).

Belden has appointed APS Industrial as its Australian distribution partner from 1 January 2020.