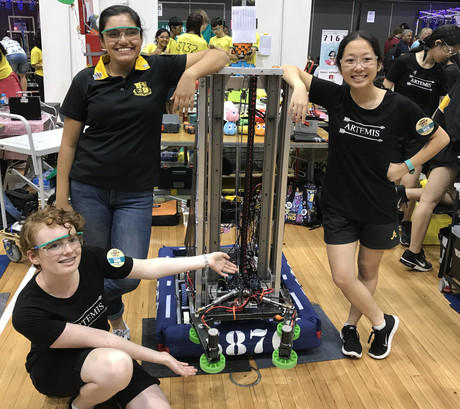 ARTEMIS is an all-girls robotics team from Abbotsleigh Senior School in Sydney, Australia. ARTEMIS currently has students from Years 7–11 competing in both the FIRST LEGO League (FLL) and the FIRST Robotics Competition (FRC). Its mission statement is “STEM for a fairer world”.

This year’s FRC game, ‘Power Up’, was based around robots delivering cubes to different areas on the field to score points. The vault is an area on the end of each field where cubes are delivered to earn points and gain powerups, the switch is a short seesaw-like contraption where points are given to the team who has it tilted in their favour, and the scale is similar to the switch, but much taller. The ARTEMIS robot this year has a pneumatic-controlled gripper intake with compliant wheels and a two-stage elevator that could lift the cubes to well over 2 m, so that the cubes can be placed into the vault and onto the switch.

To build the two-stage elevator, initially the students only had access to linear slides that were half the height needed, and half were the igus drylin N type slides, which are not as strong as the larger drylin W slides. Treotham Automation provided four lengths of 1.2 m drylin W slides and carriages. Using AutoCAD Fusion 360, the students completed a nested elevator design with the slides that would lift the intake mechanism holding the cube to well over 2 m. A geared 300 W winch using 3 mm cable lifted the elevator through a series of pulleys to the top position, and gravity was used to return it to the bottom. Treotham also provided 4 m of energy chain so that all cables and pneumatic lines could be managed.

At the competition the igus drylin W linear slides worked flawlessly, allowing ARTEMIS to successfully run the robot and place the cubes onto the scale.

For the upcoming off-season competition in July, the students plan to mount a hook and additional winch to the lift so that the robot can lift off the ground during the endgame to gain even more points, and the students are confident that the drylin W slides will be strong enough to pull the robot up. The software team is also hard at work to improve the autonomous code to use the gyro and encoders the students have installed. The Year 11 students are also currently creating a second, high-speed robot called Artemoose for the event.

AMS Instrumentation & Calibration has announced the venue for the 2020 Beamex Users Group (BUG).

LAPP is expanding in Australia, adding new staff, and adding Wago and Tosibox product lines to...

Belden has appointed APS Industrial as its Australian distribution partner from 1 January 2020.