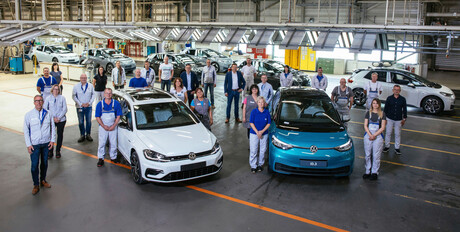 The company announced that from that date only Volkswagen electric models — and in future also the sister brands Audi and Seat — will be produced in Zwickau, making the plant currently the largest electric car plant.

Cars with combustion engines have been built in Zwickau since 1904 — initially for many years, including Horch models, and in GDR times the Trabant came off the assembly line here. In May 1990, Volkswagen started production, and over the course of the past 30 years, exactly 6,049,207 Volkswagen cars (Polo, Golf, Golf Estate, Passat Saloon and Passat Variant) have been produced in Zwickau.

“Today is a historic day for us,” said Reinhard de Vries, Managing Director of Technology and Logistics at Volkswagen Sachsen. “We are proud of what we have achieved so far, and at the same time are greatly looking forward to what the future holds for us. The trend towards electric mobility will continue to pick up speed. We will meet this demand from Zwickau: we have already created the capacity to build 330,000 vehicles next year.”

“Zwickau is steeped in German automotive tradition,” said Jens Rothe, Chairman of the General Works Council at Volkswagen Sachsen. “Our team has always delivered excellent performance and built vehicles with excellent quality. We have gained the trust in the Group to become the first location to start fully electric large-scale series production. The Zwickau plant is therefore well equipped for the future.”

Work has already started in Hall 6 where the Golf Estate has been produced so far. After a conversion phase lasting several weeks during the summer, the first electric vehicles will be produced there at the end of the year — alongside the ID.4, an SUV from the sister brand Audi is also planned. Series production of the ID.3 1st Edition already started at the site in west Saxony in November 2019, and the start of production of the ID.4 will follow this summer.

With the step-by-step transformation of the Zwickau plant, Volkswagen is for the first time switching a large car factory completely to electric mobility. The investments for conversion amount to around 1.2 billion euros. In the final expansion stage from 2021, six MEB models will be built for three Group brands in Zwickau. All 8000 employees will be prepared for production of electric cars and for handling high-voltage systems as part of various training measures. The Zwickau team will complete around 20,500 days of training by the end of 2020. This will ensure long-term job security at the Zwickau location.

This will not be the last major plant to stop producing internal combustion-based cars. The question for the Australian car market is whether our government can yet see the writing on the wall and make the appropriate support available to allow Australians to be able to take up electric vehicles in practical numbers. Currently the uptake of electric vehicles in Australia is only 0.2% of the market whereas in countries such as Norway more than 60% of vehicles sold are electric. The change at Volkswagen shows what the future holds for all of us.

Image: The last petrol-powered Golf produced at Zwickau, next to a new electric ID.3.