Sydney to host RoboCup in 2019 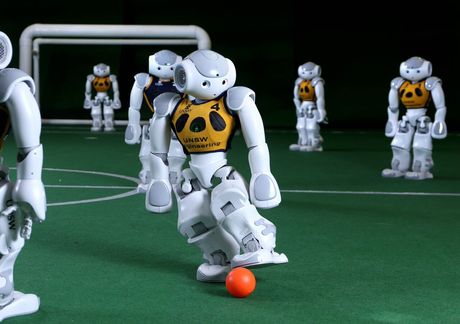 Hundreds of robots will descend on Sydney to battle for coveted RoboCup world titles when the city hosts the competition in 2019.

The world’s biggest annual robotics event is coming to Sydney in June 2019, with hundreds of robots due to battle it out for one of the coveted RoboCup world trophies. Up to $7 million will be injected into the Australian economy.

The RoboCup International Symposium and World Championship, one of the world’s leading technology events, will be held in Sydney following a successful bid by Business Events Sydney (BESydney) and partners including UNSW, RoboCupJunior Australia (a high school competition circuit) and Bastion Collective.

RoboCup aims — by 2050 — to field a team of fully autonomous humanoid robots capable of defeating the World Cup-winning squad in a match governed by FIFA’s official rules.

“This is the ‘space race’ of robotics,” said Maurice Pagnucco, Deputy Dean (Education) in Engineering and Head of the School of Computer Science and Engineering at UNSW, and a noted expert in artificial intelligence and cognitive robotics.

“Competition pushes advances in technologies. What we learn from robots playing soccer or navigating a maze can be applied to industry and help us solve difficult real-world problems,” he added. “The same vision system developed by UNSW for RoboCup is now being used to track the hands of workers in a saw mill, to ensure the machinery avoids causing injuries.”

More than 2000 researchers and innovators from 50 nations will be in Sydney for RoboCup events that extend to search and rescue, caregiving assistance and other real-world scenarios.

“RoboCup brings the best of the best in robotics to our shores to debate, discover and drive our future. Over six days, up to 600 teams will compete in front of 20,000 spectators,” said Lyn Lewis-Smith, CEO of BESydney. “RoboCup is developing the skills that will be needed for the jobs of the future and it’s testament to our own local talent that this leading event has chosen Sydney as its host.”

Australia’s Chief Scientist, Professor Ian Chubb, welcomed the win. “RoboCup will be a major event for Sydney and will be another way to spark interest nationally in science, technology, engineering and mathematics subjects that are so important to preparing young people for work in a rapidly changing world.”

NSW Chief Scientist and Engineer Mary O’Kane confirmed her support for BESydney’s efforts to win the event, which will profile NSW’s international leadership in robotics. “NSW is a leader in robotics research globally, particularly in large-scale field robotics and autonomous systems. The state also has considerable strength in artificial intelligence.

“Australian universities have been enthusiastic participants and supporters of RoboCup, competing in the event every year since its inception in 1997,” she added. “The UNSW team has enjoyed great success — crowned world champions more times than any other team. Bringing RoboCup to Sydney will significantly boost the profile of robotics here. Perhaps more importantly, it will pique the interest of our children, their parents and teachers in the fields of maths and science, which is tremendously important.”

In 2019 RoboCup will be held at International Convention Centre Sydney (ICC Sydney) with a number of events also held around the Darling Harbour foreshore.

The NSW Government has unveiled a long-term strategy for turning the state's R&D...

Deepwater hyperbaric test chamber to be established in WA

Matrix will establish the first deepwater hyperbaric test chamber in the Southern Hemisphere...