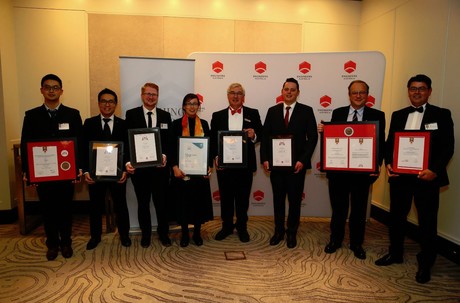 The Sydney branch of Engineers Australia presented its annual Engineer of the Year Awards at its centenary celebration held on 17 August. The awards seek to identify and reward outstanding achievement in the practice of engineering and service to the profession.

Chartered Mechanical Engineer David Jehan was awarded the 2019 Sir John Monash Medal for outstanding contribution to engineering heritage. Having written and lectured on engineering heritage, Jehan is also involved in operating a heritage railway and industrial equipment display on the NSW’s South Coast, where he established training systems for heritage steam equipment operators.

Professor Brian Uy, Head of the School of Civil Engineering, University of Sydney, was named 2019 Sir John Holland Civil Engineer of the Year. He is an international authority on steel and composite structures, having helped to build Australia’s civil engineering capacity in human resources and physical infrastructure through his 25+ years in academia.

Dr Helen Cartledge, Director for Maritime Autonomous Systems, Defence, has been named 2019 Professional Engineer of the Year – Sydney, having only last month received recognition for the impact she made in supporting the Australian Defence Force (ADF) both in peacetime and in overseas operations. Her research into green composite materials has delivered solutions for protecting the environment from general waste materials.

Edmond Ang, Associate Director – Fire and Risk, AECOM, was named 2019 Young Professional Engineer of the Year – Sydney. Specialising in fire and risk, Ang has been assisting government and private clients solving some of the most complex engineering challenges. He is currently Chair of the Engineers Australia NSW Society of Fire Safety, Board Member of Engineers Australia Mechanical College and Representative on the Engineers Australia Infrastructure Advisory Panel.

Bruce Howard, Engineers Australia President – Sydney, said the Engineer of the Year Awards celebrate outstanding individual engineering achievements. “All nominees have made substantial contributions to the profession, and I look forward to seeing both nominees and award winners continue to innovate and inspire in their fields,” he said.

Greg Ewing, Engineers Australia General Manager – Sydney, added that the centenary was also an opportunity to look to the future.

“As we embark on the next 100 years, Engineers Australia is committed to fostering cultural change so the engineering profession, and Australian society, can benefit from a more diverse and inclusive engineering workforce. Working together, all of us will bring better solutions to the many challenges facing our nation, and the planet.”

Bats inspire detectors of corrosion in oil and gas pipelines

Researchers have developed a new scanning technique inspired by the natural world that can detect...

Black lung does not discriminate on age