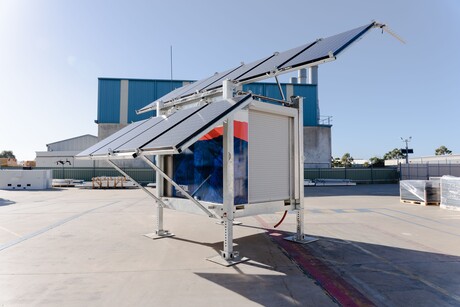 Ampcontrol Managing Director and CEO, and Boundary Power Director, Rod Henderson said this was an outstanding achievement for the joint venture which had only launched in late 2020.

“The Solar Cube is the only SAPS of its kind in Australia that can be deployed and ready to export energy in under 90 minutes,” he said. “Its modular design means the Solar Cube can be factory preassembled to fit standardised shipping container specifications for easy transportation.

“With no site works required, deployment can occur immediately, making the Solar Cube well suited to support emergency services in their rapid response and recovery from major disasters such as fires, floods and storms.”

The Good Design Awards judging panel said the Solar Cube was a great example of an innovation-led solution to support the increase in deployment of renewable energy into the Australian energy network. The panel added that the Solar Cube brings important enhancements like its rapid deployment, and has immediate application for remote locations, delivering a valuable power source to those who need it.

The company says the Solar Cube offers power utilities a utility-grade solution for remote or hard-to-reach communities where the cost to maintain and upgrade traditional poles and wires infrastructure can be significantly higher. For remote and isolated communities which can be difficult to access, the Solar Cube’s standalone power capabilities can provide continuous power quickly.

The Australian Good Design Awards is the country’s oldest awards scheme for design and innovation. The awards celebrate the best new products and services on the Australian and international market, and this year attracted a record number of submissions with 933 design projects.