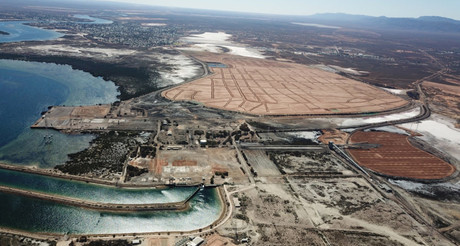 Port Augusta Operations is an independently operating arm of Cu-River Mining, the iron ore magnetite company that last year unveiled a $250 million plan for a global port facility at the site capable of handling up to 15 million tonnes a year of iron ore, grain and other commodities.

“We hope the MOU will help advance our plans to transform the site and target a start date for operations from January 2022,” a spokesman from site operator Port Augusta Operations said. “This could potentially see Port Playford become the strategic hub for multiple companies to use in transporting and exporting products from the region.”

Port Augusta Operations has a 99-year lease on the Port Playford site and is working on developing the land and terminal into a modern iron ore export terminal including refurbishment, upgrading and other transhipment arrangements.

The establishment of an iron ore port would help reclaim the upper Spencer Gulf region’s former title of the “Iron Triangle” following the resurgence of the Whyalla steelworks and the ongoing lead smelter in Port Pirie.

Flinders Power has been managing the rehabilitation of the former power station site since its closure in 2016, and reached an agreement in February 2019 to sell the coastal land to CU-River Mining.

“Given the almost zero overburden, soft nature of the iron ore and its amenability to upgrade to a high-yield, high-quality 65% iron product, we think the availability of this new port facility will potentially help to make our iron ore deposits internationally competitive.”

It is expected more than 150 people would be employed during the construction phase and up to 100 people for full-time operational positions once construction was complete.

Alinta Energy mothballed Playford B in 2012 and the last electricity was produced at the Northern Power Station in May 2016.

As part of the closure process, South Australia’s Environment Protection Authority required Flinders Power to develop and implement a closure and post-closure plan, a dust management plan and a rehabilitation plan for the ash dam, and put in place additional dust control measures when needed.

Flinders Power managed the rehabilitation of the Port Augusta site after its closure and reached an agreement in February to sell the coastal land to CU-River Mining.