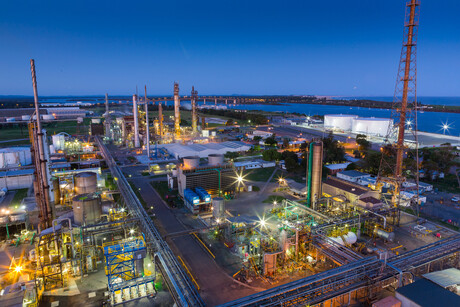 Orica has announced plans to install an Australian industry-first tertiary catalyst abatement technology, EnviNOx, at its Kooragang Island manufacturing plant. The technology is designed to deliver up to 95% abatement efficiency (from unabated levels), reducing the site’s total greenhouse gas emissions by almost 50%.

The technology will be installed across all three nitric acid manufacturing plants used in the production of ammonium nitrate at Kooragang Island, and is designed to eliminate at least 567,000 tCO2e per year from the site’s operations. It is expected to reduce the sites total emissions by 48% and deliver a cumulative emissions reduction of at least 4.7 MtCO2e by 2030 based on forecast production.1

Orica Managing Director and Chief Executive Officer Sanjeev Gandhi spoke about the critical role collaboration and partnerships will play in the decarbonisation of hard-to-abate industries, saying:

“The Kooragang Island Decarbonisation Project is a powerful example of a public-private partnership towards decarbonisation and marks a critical step in achieving our medium-term 2030 emissions reduction targets and progress towards our net zero ambition. We’re committed to working with our stakeholders to forge a pathway towards a lower carbon future together.

“Thanks to the support of the New South Wales and federal governments we have been able to co-invest and move forward on implementing a significant decarbonisation project.”

New South Wales Treasurer and Minister for Energy and Environment Matt Kean said: “The Kooragang Island Decarbonisation Project will contribute to the government target of reducing NSW emissions by 50% by 2030. The project is expected to deliver a cumulative emissions reduction equivalent to 567,000 tonnes of carbon dioxide per year providing significant decarbonisation benefits within the decade.

“This is a great example of what can be achieved by hard-to-abate industries transitioning towards net zero emissions, under our $750 million Net Zero Industry and Innovation Program announced earlier this year.”

The Kooragang Island Decarbonisation Project was approved in March 2021 by the Clean Energy Regulator to participate in Australia’s carbon market. Orica is eligible to generate ACCUs and was awarded the first optional Carbon Abatement Contract under the Facility Method for the purchase of around 3.4 million ACCUs by the Australian Government. This approach has enabled investment confidence by managing ACCU price risk.

The technology is expected to be installed on the first nitric acid plant from 2022.