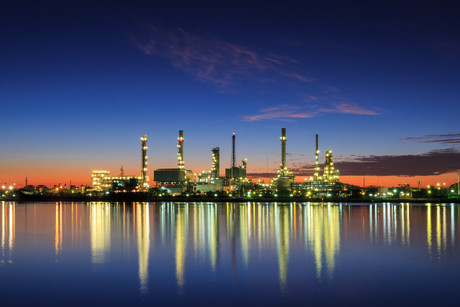 Researchers at the University of Sydney have created a new material that has the potential to reduce CO2 emissions released during the refinement process of crude oil by up to 28%.

Silica-alumina materials are among the most common solid acids that have been widely commercialised as efﬁcient and environmentally friendly catalysts in the petrochemical and bioreﬁnery industries. In what is claimed to be a world first, a team of researchers at the University of Sydney led by Associate Professor Jun Huang have produced a new amorphous silica-alumina catalyst with stronger acidity than any other silica-alumina material created before.

“This new catalyst can significantly reduce the amount of CO2 emitted by oil refineries, which has the potential to make the fossil fuel industry much greener and cleaner,” said Prof Huang.

A significant amount of carbon is emitted during the refinement of crude oil to produce products like petroleum, petrol and diesel. Estimates suggest 20–30% of crude oil is transferred to waste and further burnt in the chemical process, making oil refineries the second largest source of greenhouse gases behind power plants.

Silica-aluminas with strong Brønsted acidity — a substance that gives up or donates hydrogen ions (protons) in a chemical reaction — are becoming increasingly important to various sustainability processes, including the fields of biomass conversion, CO2 capture and conversion, air pollution remediation, and water purification.

“Renewable energy is important to achieving a more sustainable energy supply, but the reality is that we will still be reliant on fossil fuels in the foreseeable future,” said Prof Huang. “Therefore, we should do all we can to make this industry more efficient and reduce its carbon footprint while we transition to renewable energy sources.

“This new catalyst offers some exciting prospects. If it were to be adopted by the entire oil refinery industry, we could potentially see a reduction of over 20% in CO2 emissions during the oil refining process. That’s the equivalent of double Australia’s crude oil consumption, over 2 million barrels of oil per day.

“The new catalyst also has the potential to develop the biomass industry. We can now look to biomass material like algae to be part of sustainable energy solutions,” he added.

The next step for the researchers is to work on manufacturing the new catalyst at a large, industrial scale.

The research was supported by the Australian Research Council and the University of Sydney.