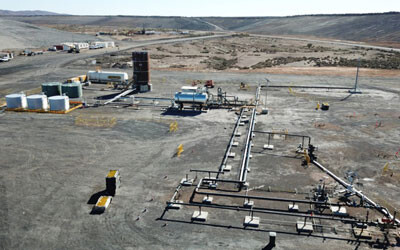 The Australian Government last month released its ‘technology investment roadmap’, setting out Australia’s energy low-emissions priorities over the next 30 years. The paper examined more than 140 technologies including hydrogen, renewables and biofuels, and said Australia was well placed to develop a major hydrogen export if it could be produced below $2 per kg.

South Australian company Leigh Creek Energy says it can produce 200 million kilograms of hydrogen a year at less than $1 per kg to fuel growing global demand. The company said in a release to the Australian Securities Exchange this week it had conducted a pre-commercial demonstration at its Leigh Creek Energy Project site 550 km north of Adelaide, where it successfully produced significant quantities of ultra-low-cost hydrogen.

“Partnering with Meijin provides LCK with significant advantage in developing a hydrogen fuel market within Australia,” the ASX statement said. “We are currently in discussion with Meijin to JV with them to bring their technology to Australia.”

Hydrogen can be produced as a gas, liquid or as a component of other energy sources and can be used as a transport fuel, for heating, electricity and for industrial purposes. According to Leigh Creek Energy, the global hydrogen market is valued at $100 billion with an annual growth rate of 6–8%.

The Leigh Creek coalfields originally supplied coal to the Port Augusta power station in South Australia via a dedicated 260 km train line. The power station closed in 2016 and the site and rail line were sold to China-backed CU-River Mining last year, which plans to turn it into a global export port.

Leigh Creek Energy listed on the ASX in 2015 and has spent the past four years obtaining licences. Last year it established a pre-commercial demonstration (PCD) plant to produce a combination of hydrogen, nitrogen, CO2 and methane, known as syngas. Aside from the hydrogen potential, the company said it intends to use that syngas to make urea, a nitrogen-based fertiliser.

Industrial engineering group Thyssenkrupp was recently contracted to complete some modelling work for Leigh Creek Energy and found it could produce 200 million kilograms of hydrogen a year at a cost of less than $1 per kg.

“We can make a huge amount of hydrogen, much cheaper than anyone else can make it,” said Justyn Peters, Leigh Creek Energy Executive Chairman, in an interview published by the ASX on Thursday. “So that being the case it would be foolish if we didn’t actually look at the production of hydrogen and the possibilities that can make.

“And it’s interesting that hydrogen is now being looked at as an export gas … we’re seeing a fundamental change in the way hydrogen is being transported.

“If you were going to produce that amount, you’d have to have (a) a market in place or (b) export it.”

Peters said the fertiliser plan was disruptive because Leigh Creek Energy would be one of the first companies in the world to use its own in-situ gasification to produce urea, which would allow it to be done far more cheaply and efficiently than its competitors who bought gas at market rates to manufacture fertiliser.

“So we have a huge cost advantage over anybody else that produces this,” Peters said. “And it’s particularly interesting with the COVID virus and a lot of the disruption in transport chains around the world that we can make enough urea to supply the Australian market without having to actually import any of it.”

Peters said Leigh Creek Energy was in discussions with large fertiliser manufacturers in Europe, North America and China to potentially become strategic partners and fund the construction of the urea plant at Leigh Creek.