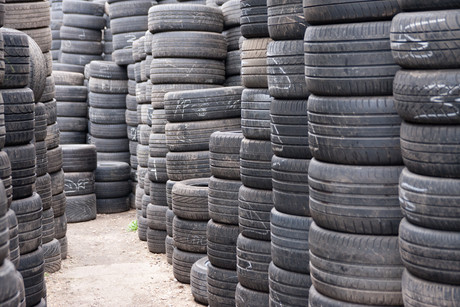 Imagine a self-repairing rubber or super-adhesive made entirely from waste materials. It sounds like science fiction or a scene from The Terminator, but researchers have discovered a new kind of rubber and catalyst that together can be used with low energy consumption to make flexible, repairable, sustainable objects — including car tyres.

The new rubber material, made from cheap and plentiful industrial waste products including sulfur, canola cooking oil and dicyclopentadiene (DCPD) from petroleum refining, can be completely repaired and returned to its original strength in minutes — even at room temperature — with an amine catalyst.

The new type of rubber can be seamlessly repaired if damaged and can also be recycled, says research leader Flinders University Associate Professor Justin Chalker, whose team’s breakthrough findings are described in international journal Chemical Science.

The amine catalyst used to trigger the reaction that causes the rubber to self-repair occurs within minutes in some cases and it is all done at room temperature, the scientists say.

“This study reveals a new concept in the repair, adhesion and recycling of sustainable rubber,” said Associate Professor Chalker, adding that too many plastics, rubbers and ceramics are not recyclable.

Each year in Australia, the equivalent of 48 million tyres reach the end of their life, and only 16% of these are domestically recycled. Around two-thirds of used tyres in Australia end up in landfill, are stockpiled, are illegally dumped or have an unknown fate. This represents both a waste of resources and creates health and environmental issues. Each passenger car tyre contains approximately 1.5 kg of steel, 0.5 kg of textiles and 7 kg of rubber.

“It is exciting to see how the underlying chemistry of these materials has such wide potential in recycling, next-generation adhesives and additive manufacturing,” said Associate Professor Chalker.

Researchers from the Chalker Lab at the Flinders University Institute for Nanoscale Science and Technology, with University of Liverpool and University of Western Australia colleagues, say the new rubber can be used as a ‘latent adhesive’.

“The rubber bonds to itself when the amine catalyst is applied to the surface. The adhesion is stronger than many commercial glues,” said University of Liverpool researcher Dr Tom Hasell. “The polymer is also resistant to water and corrosion.”

Rubber bricks made out of this polymer can be chemically joined by applying the catalyst.

In addition to the highly practical applications, the new paper provides detailed fundamental studies on the mechanisms of the rubber repair.

Adelaide-based Core Lithium has received a $5 million funding offer from the NT Government to...

Madison Technologies has rebranded as Madison Group Enterprises to expand its products, solutions...

Getting a grip on pet food pouches

FSANZ call for comment on additive to preserve beverages