Here's cheers to a new use for CO2 from the atmosphere 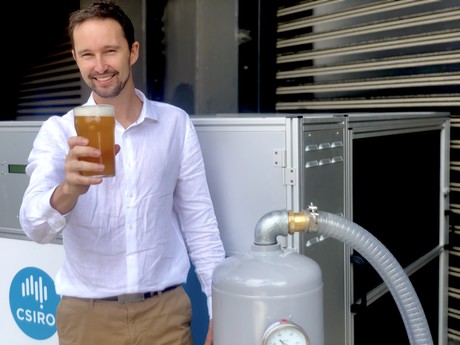 CSIRO has found a way to pull carbon dioxide out of the atmosphere and put it into beer and other beverages.

At a time when CO2 levels in the atmosphere are increasing, there have been shortages in industrial supplies of the gas over the past decade. CO2 is in global demand for purposes ranging from making fizzy beverages to food packaging and controlling the atmosphere in agricultural greenhouses.

CSIRO’s new technology is called Airthena, and was developed in partnership with Monash University, Energy Infrastructure and Resources and H2H Energy. It draws on recent breakthroughs in advanced filtration methods to solve challenges around the water-food-energy nexus, including sustainable resources and environmental value and resilience.

Airthena captures CO2 directly from the air using tiny sponges known as metal–organic frameworks (MOFs), and can be scaled up for commercial production. CSIRO project lead Aaron Thornton said the solution has broad applications across a wide range of industries.

“As it requires just air and electricity to work, Airthena offers a cost-effective, efficient and environmentally friendly option to recycle CO2 for use onsite, on demand,” he said. “It also provides a more reliable source of CO2 for use in small-scale applications ranging from beverage carbonation to controlling pH in swimming pools and industrial cleaning.”

A common method companies currently use to generate CO2 onsite relies on burning natural gas, which is subject to market price and supply fluctuations. CO2 can also be bought from a supplier, which can involve expensive long-distance transportation and be prone to shortages.

Airthena only needs about 2 kWh of electricity per kilogram of CO2, equal to around 20 c/kg at minimum solar energy prices of $0.1/kWh at its current scale.

Jon Murphy is General Manager of Murphyfresh Hydroponics, which uses CO2 in its greenhouses to grow tomatoes and other produce.

“We spend a lot of money on buying in carbon dioxide, so we’re eager to see a new technology that can deliver CO2 onsite, on demand,” he said.

Airthena is capable of capturing two tonnes of CO2 from the atmosphere a year, making it suitable for small-scale applications right now, but Dr Thornton says it is scalable.

While Airthena won’t make any immediate impact on cutting global CO2 emissions due to its scale, it will help businesses with a more reliable source of the gas for their everyday operations, while reducing their carbon footprint.

“We are now exploring options for taking Airthena to market, which include reducing the cost of the unit for small-scale applications and having it tested to ensure it meets food quality standards, or working with the food production industry to scale up the technology for larger applications,” Dr Thornton said.

Airthena could also be valuable for the chemicals industry, which use CO2 as a feedstock for making other compounds and materials such as methanol and methane.

The collaboration and development of Airthena was supported by $725,000 from the Science and Industry Endowment Fund.

If you’re a business interested in working with CSIRO to further develop this technology, visit CSIRO’s Marketplace.

Image caption: Dr Aaron Thornton’s research into developing Airthena could be a boon for beer.