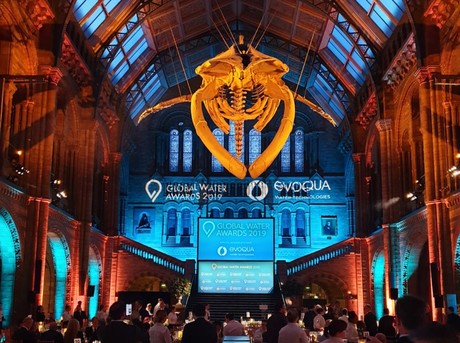 Global Water Intelligence (GWI) has announced the winners of the 2019 Global Water Awards, which were presented on Tuesday, 9 April at the Natural History Museum, London as part of the Global Water Summit 2019. The awards ceremony recognises the industry’s greatest achievements over the previous year, rewarding the initiatives and companies in the water, wastewater and desalination sectors that are moving the industry forward through improved operating performance, innovative technology adoption and sustainable financial models.

Among the winners were two Australian organisations. Sydney Water Customer Hub was awarded Smart Water Project of the Year, while Yarra Valley Water was inducted into membership of the Leading Water Utilities of the World.

Membership of the Leading Utilities of the World network is a recognition that a utility is among the best in the world, based on relative improvement as much as absolute achievement.

Christopher Gasson, Publisher, Global Water Intelligence commented, “The Global Water Awards 2019 celebrated the stories of positive disruption in the water sector in 2018, recognising the pioneers and innovators who pushed the industry to greater heights in the last year. This year’s shortlist represented truly outstanding quality, and to be nominated is an exceptional achievement. We’d like to congratulate this year’s Global Water Awards winners, who exemplify the kinds of positive change and disruption that will continue to drive the international water sector to greater heights in the coming years.”

Among other winners were:

The Global Water Awards are voted for by subscribers to GWI Magazine and Water Desalination Report. In addition, Global Water Summit 2019 delegates who registered for the early bird discount were also eligible to vote.

More information on the Global Water Awards can be found at: www.globalwaterawards.com.