Explosion and fire at largest US east coast refinery 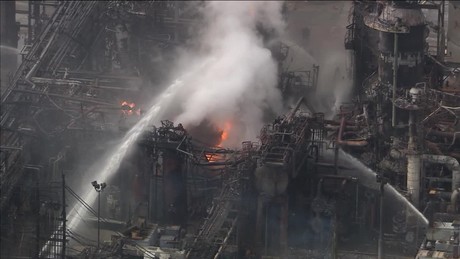 A massive fire that erupted after an explosion at a Philadelphia oil refinery, in which four workers were injured, is another blow for the already financially struggling company, according to reports from Reuters and CNN.

The alkylation unit involved in a massive fire on Friday at the refinery owned by Philadelphia Energy Solutions Inc. (PES) has been completely destroyed, which will hamper the supply of petroleum fuel from the US east coast’s largest refinery.

The destruction of the unit, coupled with damage from the fire that ripped through the 335,000 barrel-per-day (bpd) refining complex, could force the 200,000 bpd Girard Point section of the two-section complex to remain shut for an extended period.

Major units in the Point Breeze section of the plant were also shut down due to unrelated repairs, sources said. Even when the Girard Point section restarts, it will run at reduced rates due to the loss of the alkylation unit, two sources told Reuters on Sunday.

It could take several years for the company to rebuild the unit.

The fire began with an explosion on Friday morning from a vat of butane and propane. Residents reportedly felt the explosion in South Jersey and Delaware County, Pennsylvania. The fire sent large plumes of smoke into the sky that could be seen for miles. Emergency management officials initially asked people east of the fire to shelter in place, but the order was quickly lifted.

The Philadelphia Fire Department’s hazmat unit and Philadelphia’s department of public health are continuing to monitor the air quality around the refinery.

A source familiar with plant operations said one explosion occurred at the 30,000 bpd alkylation unit that uses hydrofluoric acid (HF), one of the deadliest chemicals in the refining business and a source of controversy for its use to make high-octane gasoline at refineries located in densely populated areas.

Hydrofluoric acid can form a toxic cloud at room temperature, with exposure leading to severe health problems and even death.

PES confirmed the fire at the alkylation unit has been extinguished and that the company and a third party are monitoring the air quality inside the facility each hour.

The fire comes as the company has faced financial headwinds, having emerged from bankruptcy roughly a year ago and working on a number of cost-saving measures in recent months, according to reports.